The War of Words over Blood Diamonds

As India, China and Dubai become the world’s biggest markets for these stones, African countries like Angola are resisting attempts by the West to stigmatise their products as conflict diamonds 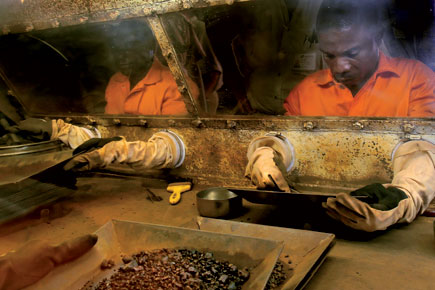 As India, China and Dubai become the world’s biggest markets for these stones, African countries resisting attempts by the West


LUANDA, ANGOLA ~ It was Angola’s centenary celebration of diamond mining at Epic Sana, the most expensive hotel in the country’s dusty capital Luanda. Guests filling the expansive banquet hall suddenly saw an old man walk through a space reserved for cameramen. He was singing a hauntingly melodious song. Wearing dark glasses and a crumpled suit, the singer was Elias Francisco, Luanda’s oldest singer (known to many as Elias Dia Kimuezo). Unmindful of the virtual stampede he had triggered among the excited cameramen, he continued his song.

Titled Nzala—Portuguese for ‘hunger’—the song was about his land of diamonds, copper and oil, all in abundance. Considered the king of Angolan music, Francisco wanted everyone to follow the seven words that formed the central theme of his song. He kept repeating them: ‘Work with me, not steal from Africa.’ For him, the continent, his home for generations, was the last best place on earth. As he finished his song, he was greeted with thunderous applause. Some rushed to put wads of Kwanza, the local currency, into his pocket. To many at the conference, it seemed Francisco had conveyed what generations of African governments could not explain to the world.

Diamonds were once an integral part of Africa’s harshest civil wars, but are now scripting the continent’s story of economic growth. At the heart of this change is demand from China, India and Dubai, the Asian troika playing a key part in African empowerment. With the world’s biggest markets, these three are now the eventual destination for most African diamonds.

It has been just over a decade since coastal Angola emerged from a bloody civil war. The country has an estimated $20 billion worth of oil reserves and sells diamonds worth $1.2 billion every year. By value, it is the world’s fifth largest diamond producer. Angola now wants to trade its minerals on its own terms, and the rest of the world is paying attention.

Helped along by investment inflows from China, India, Dubai and even Russia, Africa has steadily been changing its broad strategy to market its minerals, especially diamonds. The image of boy soldiers prodded by rebel leaders is slowly being replaced by men working in Angola’s Catoca mines—the country’s largest—on a monthly salary of $1,000 and with benefits like food at work, medical insurance and free education for children. Africa, to its people and the world, wants to be seen as part of the era’s globalisation story.

Everyone at the conference agreed. “One of the overriding consequences of the diamond sourcing process is the empowerment of African nations and African people. For them to obtain the full benefits [of] their natural resources, it is imperative that both diamonds and the diamond industry [stay clear] of any reputation threat,” said Elli Izhakoff, chairman of the Dubai-based World Diamond Council, one of the most powerful bodies of the global diamond trade.

Izhakoff was alluding to Western reports on—and allegations of—the sustained supply of blood diamonds to world markets, and how India, China and Dubai ignore what Western NGOs claim is the ‘grim reality’ of the business in African countries such as Angola. Recently, a 17-page report by the Bonn-based International Center for Conversion blamed Angola’s armed forces for dominating the diamond trade and encouraging human rights violations at mines bordering Congo. African leaders see all this as a Western conspiracy to control the business of solitaires, currently witnessing an Asian boom.

India is the world’s second largest buyer of diamonds, tied with China. The US, which accounts for 40 per cent of the world market in dollar terms, remains the biggest for now. However, with demand bustling in Asia’s big two—China’s domestic market leapt 13 per cent in 2011-12; India’s figures are unavailable but could be similar—the world’s top diamond marketer De Beers has forecast that the two will surpass the US by 2020.

African exporters see this as good news and are pleased to realign their strategy accordingly. “The growth of African nations is directly proportional to the growth of its minerals, especially diamonds. Sustained mining is the only answer to strong GDP [growth] in African countries, all of which comply with Kimberley Process regulations [a certification scheme to filter blood diamonds],” said Antonia Carlos Sambula, chairman of Luanda-based Endiama that controls the country’s Cataoca mines, the world’s fourth largest, through a joint venture with Russia and Brazil. Sambula also said the time had come to decide whether the West would like to endorse and go by negative portrayals of Africa, or accept the Kimberley Process as a valid certifier of ethically obtained diamonds from African mines. Africa, it seemed clear, was fast losing patience with Western diktats on the ethics of business practices. “If there are new markets,” said Sambula, “Africa will look at those and sell its solitaires [there].”

The chairman of Endiama also took delegates on a guided tour of the Catoca mines, walking them around for hours while expounding on what his company does for its 4,000 plus miners. “Their salaries are one of the best in the world, at $1,000 a month,” he said, “Food, housing, education and medical care are free for their families. We are [open] to inspections. Come here and see for yourself. Do not paint us black by saying our mines are controlled by child soldiers. The war is long over.”

Diamond markets in the US, Canada, Germany and the UK have shown a rapid decline in the last three years because of the West’s economic recession. In comparison, Asian markets have grown dramatically in the same period. “Africa knows what is best for Africa,” said South Africa’s Welile Nhlapo, current chairman of the Kimberley Process, “Africa produces nearly half of the world’s rough diamonds [49 per cent]. And the Kimberley Process is the final authority on diamonds. If the Kimberley Process says ‘the diamonds are clean’, then the diamonds are clean. If a country wants to dictate the diamond market, it must have the capacity to consume. No threats will work here.”

Nhlapo reminded the audience how the US had last year wanted to push through a new rule that would have sabotaged trade with India, which polishes nearly 95 per cent of the world’s rough diamonds. Under this proposed rule, any violence in diamond trading centres would automatically label the stones as ‘blood diamonds’. The move fell through after vociferous protests from India, China and other African countries.

Delegates from India at the conference agreed with their African counterparts. “If we had not protested, the US would have pushed it as a law,” said Anup Zaveri, a senior official of the Mumbai-based Gems and Jewellery Export Promotion Council, “We don’t have riots in Surat? And when the Kimberley Process is certifying that less than one per cent of diamonds traded in the world are blood diamonds, why would anyone be worried about the very existence of blood diamonds? Where are blood diamonds now? I think this is a figment of the West’s imagination—seeing all African mines as producers of blood diamonds.”

Traders from India, Dubai and China spoke in one voice to reject such ‘high-handedness’ by the US and other Western countries. “The West is afraid of losing [market clout] to India and China and Dubai,” said Dr Minesh Shah of AS Exports, a diamond firm based in Mumbai, “But if Asia is showing growth and Western markets are down, can anyone go against market sentiment? India and China have a huge population base that is keen to buy diamonds. Dubai is growing as one of the world’s biggest diamond hubs.”

According to Peter Meeus, an industry veteran and chairman of the Dubai Diamond Exchange, misinformation on the diamond trade was being spread by NGOs. “There was a time when we enjoyed working together as an industry with NGOs,” he said, “They were fighting for a right and just cause, especially in Africa, so they had the support of Africans and it worked.” Meeus noted that while diamonds have emerged as the world’s most controlled commodity despite less than 0.2 per cent of their supply being ‘conflict diamonds’, the industry’s relations with NGOs had fallen ‘below zero’.

“Why are they so dissatisfied with the accomplishments of the Kimberley Process and diamond industry?” Meeus asked, suggesting that these NGOs were in competition for funds to tell a story that had become greater than the cause. “I think the NGOs are fighting for their own relevance.” However, to reinforce the credentials of African diamonds, Meeus called for third-party verification by financially independent institutions that had the wherewithal to judge any abuse of ethical norms. “If there are human rights violations, they need to be judged by independent institutions that are really independent, and are respected as such and do not cook up stories for the sake of their own existence,” Meeus said. “That is what we proposed last year to the then Kimberley Process chair—a message clearly not understood. So it’s time to repeat it. Let the Kimberley Process be a certification scheme and not a human rights violation checker.”

With China set to take over the Kimberley Process chair next year, the focus of the diamond business is expected to turn even more decisively towards Asia’s boom markets. African exporters are loving every moment of it, hailing this new trade pattern as their ‘Silk Route to Freedom’.

Outside the Epic Sana hotel, Elias Francisco says he need not sing Nzala for much longer. Under the new dispensation, no one will steal minerals from his land. His next song is titled Uniao—Portuguese for togetherness. It goes with the new mood, a celebration of sorts as Africa reorients its globalisation thrust from the West to Asia.

The singer has read the headline of the day’s leading newspaper that says China Petrochemical Corp, also known as Sinopec, has agreed to a $1.52 billion deal to buy the US-based Marathon Oil Corp’s 10 per cent stake in an Angolan oil and gas field. The second headline spoke of the Russian diamond giant Al-Rosa signing a deal with Endiama for diamond exploration in Angola.

Youngsters crowd the campus of Luanda’s biggest private university, Universidade Metodista De Angola, for admission to courses as diversified as financial markets, and information and communication technology. Outside the campus, there are a handful of hawkers selling ice-cream and stick jaws. Sorry, no meat, at least not for sale on African streets. That is only in pulp fiction.