The Man Who Makes People Disappear 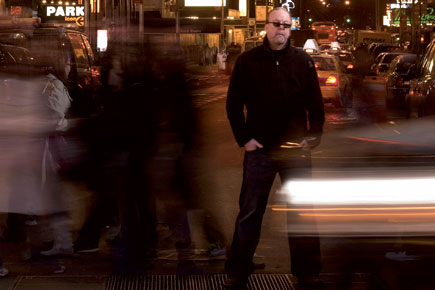 
Open has a cinema page in its Arts and Culture section, and Frank Ahearn was initially going to be a trivia piece accompanying the film reviews. An editor was then struck by these four lines: ‘Frank M Ahearn, who has acted in Zila Ghaziabad, spent most of his career locating people who were perhaps running away from credit card companies. Today he helps people disappear in a digital world. His clients include whistle blowers or others trying to hide their identity.’ It was enough for another editor to think this was interesting enough to make a larger story. Zila Ghaziabad stars Sanjay Dutt, Vivek Oberoi and Arshad Warsi. In the film’s IMDb profile, Frank Ahearn’s name comes right at the top of the cast, even before Dutt’s. There are also other Hindi film websites which have his name associated with Zila Ghaziabad. The movie was released a few days ago, and it was possible that Ahearn was in India. I found his email ID on his website and sent a mail asking him if he was in the city now or anytime soon for an interview. Ahearn replied the same day:

There must be a mistake. I was never in that movie. It’s an odd thing, I have seen my name show up in movies and other forms of media and I did not partake in them. If you want to discuss privacy and what I do, I am open to that.

He was in New York, so we decided to speak on the phone. Ahearn claims that he is the only person in the world (or at least the only one doing it with some success) who makes people disappear for a fee. He started off as a private investigator working undercover in stores to find out whether cash or merchandise was being stolen by employees. He then discovered that his real knack was for finding people who did not want to be found. It is called ‘skip tracing’, a service used by professionals like lawyers, tabloid newspapers chasing a story or people who want to locate someone for reasons like collecting a debt.

To find people who did not want to be found, Frank used identifiers like old telephone numbers or addresses. He would also call phone and credit companies assuming the identity of his target (it’s called ‘pretexting’) and get information about the target’s current whereabouts. Or he would call the target’s parents and say he had a package to deliver and the address on it wasn’t legible. Once, when he was not getting any lead on a target, he managed to trace him by getting his frequent flyer account. “I could pick up a phone and pretty much get most information from people,” he says. One day, a tabloid client gave him a woman’s name and a few details and asked him to trace her. He had never heard the name before. He and his colleagues started calling up utility firms and got a few leads.

Finally, he got the phone number of a house where she could be, but not the address. Ahearn made a call and said that he had a package which had been damaged by water and that the address was unreadable. When the person at the other end did not give away the address, he said he would then just return the package to its sender. “The person said ‘No, no, she will be here at 2 pm’ and gave me the address.” Frank told his client that he had located her and his job ended there. Later, while watching television in a bar, he realised that the woman he had tracked was Monica Lewinsky, who had been in hiding from the media, just as the Bill Clinton scandal broke out. “That’s pretty much the business that I did for 22, 23 years. At one point I had 10 people working for me. I would sit there and find 8, 10, 12 people a day,” he says.

But his business environment started changing. Calling banks or utility companies under a false pretext to get information had been a grey area in legal terms, but the US government now made it totally illegal. In 2003, he was at a bookstore when he noticed a man buying books on moving to Costa Rica and off shore banking. He then saw the man pay for the books with his credit card. “I realised that someone like me could trace his purchases and find out that he had bought a book on moving to Costa Rica,” he says. Later, at a café there, Ahearn noticed the man having coffee. He walked up to him and told him that if he was planning to disappear, then paying by credit card was going to give him away. They started talking and it turned out that the man was a corporate whistleblower who had been financially rewarded by the government. A few days later, he called Ahearn and asked for help. He wanted to disappear without a trace. “That was the genesis. It opened up a whole new world of business and I have been doing it ever since,” says Ahearn.

Ahearn does not deal with those who have criminal intent. There are usually two legitimate reasons why people want to disappear. “One is when they come into a lot of money and want to leave the world behind, or have lost most of their money and want to disappear. The other is violence—by a stalker [for example]; they’re involved in a bad personal or business relationship and expect harm. They don’t go to the government because sometimes the government can only do so much,” he says.

He does not create new identity papers—there is no new passport with a fake name. What he does is create a virtual entity out of you. “It is to make a person exist in society without having any physical connections. Meaning, the phone is not in your name, the credit cards are not paid in your name, your home, apartment and car is not in your name. To find someone, you need to find information [on him or her]. My goal is to make my client live in a virtual world. So, all one’s actions, like paying bills, etcetera, will have no connections to who one is as a person,” he says. And it is legal. For example, he will create a shell corporation of sorts and everything for this person will be done under this company’s name. Essentially, instead of giving you a new identity, he removes all the identity traces that you leave behind.

One of the cases he dealt with involved a real estate dealer who had lost money in a business deal. Some of his investors were from the underworld and threatened to kill him if he did not pay their money back. The man wanted to disappear but in the city where he lived. Also, he wanted to continue working. “What we did was got him a sort of mobile home. And he lived in it for six months in Los Angeles and basically drove all around doing his work trying to make money to pay back these people,” he says.

In another case, there was a woman married to a violent man. She wanted to get out of it. When he started stalking her, she wanted to disappear. Ahearn had to hire people to watch the husband while organising the woman’s ‘disappearance’ so that she was at no risk of running into him. “I find cases of individuals who are victims of stalking the most challenging because there is an element of danger to it,” he says.

Making a person disappear is especially difficult in the digital world because there is a lot of information on a person online. Since the websites where this information appears are owned by someone else, it is not possible to delete most of it. But it is still possible to use deception to make it irrelevant. Ahearn calls it ‘digital distraction’. So if you know something negative is to appear about you online (or already has), he will “make sure that you are not connected to that information. I’ll design information online that will combat that.”

For example, imagine if someone had an old drunk driving charge against him ten years ago and it appeared in a local newspaper. With newspapers putting all their editions online, this clip becomes a part of the person’s online profile. “What I will do is feed information that will camouflage it. I would start creating non-existent individuals online using my client’s name. I will have a fake person with the same name take credit for that drunk-driving charge with a blog post. You can’t delete the website because you don’t own it. The best thing to do is to create digital distraction and camouflage it,” he says.

If something damaging has appeared on a social media platform like Twitter or Facebook, then Ahearn creates hundreds of profiles with the same name, so it becomes impossible to pin down the person. “If people are searching your name, they will find hundreds of pages of a person with that name,” he says.

Ahearn offers an interesting service called Social Manipulation. It is used a lot by the rich and famous who are concerned that their children are so visible online that a potential abductor would know how to reach them. “I’ll use the child’s name and create hundreds of websites and pages. In this way, there will be nothing to connect the child to the client. Information has become readily available, even to people who break the law and that is what Social Manipulation prevents,” he says.

Ahearn says that 99 per cent of those who contact him usually have an illegal reason. “My first question is ‘Tell me your story’. And then I ask them for their identity—name, address, phone number, so that I can research them. I don’t work with individuals who have been arrested and are looking to go on the run. With illegitimate guys, typically their questions are to do with something illegal, like ‘How can I get a fake passport?’ That’s also part of how I screen my clients,” he says. Most of Ahearn’s clients are from Europe and he says he does not know how to explain it—Europeans just happen to be more concerned about privacy. Hiring him is expensive. He charges €200 for an initial 30 minute phone conversation. If he takes on the assignment, then his service rates begin at €25,000. On how much time it takes to make a person disappear, he says it depends—the richer you are, the longer it takes because there are more assets to hide.

On the mystery of how his name came to be associated with Zila Ghaziabad, Ahearn is not sure, but has a hypothesis. He conducts a lot of online classes on the art of disappearing. “I ask them to use their own name and create fake information. Somebody joking around might have put my name onto that,” he says.