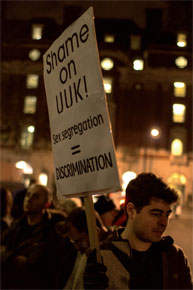 When the atheist, Secularist & Humanist Society at Reading University in England labelled a pineapple ‘Mohammed’ in its stall at the university’s freshers’ fair back in 2012, its representatives were ejected from the event for ‘causing upset and distress’ to some students, as the college Students’ Union put it. The group of atheists reacted by saying the offensive pineapple was a means for them to assert they lived in a country where free speech was protected and where a fruit may be named whatever they so choose.

Later that year at Bristol University, the Christian Union decided that women would only be permitted to speak and teach at events and meetings if they were accompanied by their husbands (amazingly, women were not allowed either at all until then). After coming under intense attack, the Union decided to revoke this on 4 December 2012, as reported by The Guardian.

On another occasion at University College London (UCL), at a talk titled ‘Islam or atheism: which makes more sense?’, atheist speaker Professor Lawrence Krauss noticed that people were being moved from their seats so men and women could sit separately. Appalled, the professor protested. ‘Almost walked out of debate as it ended up segregated,’ he tweeted, ‘saw 3 kids being ejected for sitting in wrong place. I packed up and they caved in’. To its credit, UCL took swift action against the Islamic Education and Research Academy (IERA), which had organised the event, and banned it from campus; IERA did not respond to a request for an interview for this article, but at the time disputed Krauss’ version of events, saying there was an option of a mixed seating zone, with the other two sections only for men and women who opted to sit apart.

As such ‘voluntary segregation’ becomes common in British colleges, it has inflamed a debate on campus concessions made to religious groups. According to Student Rights, an organisation that tracks extremism at universities, radical preachers of assorted faiths spoke at 180 events during a one-year period ending March 2013, with 40 of these organised by Islamic societies that allowed gender segregation. Further, an investigation by an education supplement of The Times found that of 46 respondents, 29 universities allowed this practice.

British students say they feel suffocated by all this deference to religious practices in other ways as well. “We’ve seen a stream of events which have in common the censorship of the publications of non-believers such as satires and comics,” says Chris Moos, a PhD student at London School of Economics (LSE) who was ejected from his own freshers’ fair in October 2013.

What stands out is the fervour with which Moos and his colleague, Abhishek Phadnis of LSE’s Atheist, Secularist & Humanist Society, were asked to desist from wearing certain ‘Jesus and Mo’ T-shirts that had satirical depictions of two religious personalities. Moos and Phadnis were shocked. They contend that this amounts to harrassment and believe there was no evidence that any student had complained. The Student Union representatives, they say, took it upon themselves to banish the T-shirts to avoid causing anyone who may see them any hypothetical offence.

This was all the more surprising, given the point made by the Student Union’s General Secretary Jay Stoll only a month earlier: ‘The rights of each person to dress… as they choose has been at the core of the cohesion of our multicultural society.’ Stoll, who declined comment for this story, considers this matter closed.

Moos, however, is alarmed that it is student unions rather than university authorities that have begun to encourage such censorship. “This is quite a shocking development,” says Moos.

British universities are publicly funded, and Britain prides itself in upholding the liberal values of democracy and equality, including gender equality. It is a country where debate is encouraged and freedom of expression shielded. Its universities, in turn, have a hallowed position in defending and inculcating the same in its students so they can be the country’s next doers, thinkers and leaders.

Yet, says Moos, “Many student unions have the misguided idea that since there is a lot of prejudice against minorities, they have to support the most reactionary factions within those minorities, which is ironic, because many of these people support misogyny, anti-democratic values and homophobia.” While dissent is as much a feature of student unions and universities as of society itself, Moos is unsettled by where such support may lead. “This is the society we’ll be looking at in 20 or 30 years,” warns Moos. “It’s a matter of who cries loudest. These people will be in leading positions. When we allow this, we’re sending a clear signal to society that this is permissible; it is a sign that these are the values we want to uphold.”

Confrontations between the rights of the religious and those of non-believers have always been awkward, but now many students fear that universities and student unions are acting in favour of the radically religious. It has been suggested that money is at the heart of the issue; that foreign students and their tuition fees are too valuable to lose. Like businesses dependent on foreign revenues, universities must also cater to overseas students—who happen to pay much higher tuition fees.

One lot of campaigners, including a British Indian undergraduate studying History at Cambridge, Radha Bhatt, has written to the High Commissioner for Human Rights in Geneva asking for its intervention in what they call the ‘persistent issue of discrimination through gender segregation at public universities in the UK’. Among those who have sought its help are London School of Economics’ Atheist, Secularist and Humanist Society, Southall Black Sisters and the Fitnah- Movement for Women’s Liberation.

The issue has gone far beyond student life in the UK. While campus segregation was still fizzing just before Christmas, a news story broke that a Muslim employee of Marks & Spencer, a British chain of stores, had refused to serve a customer buying alcohol. The firm apologised, calling itself a ‘secular business… that welcomes all religious beliefs’, and admitted that it should have placed the employee in question in a more suitable role. But the incident brought into focus a similar dilemma faced by businesses: to uphold secular British values or privilege minority sensitivities.

Bhatt, who has been watching trends, made the move from disgruntled bystander to active campaigner when an extraordinary event hit the headlines in November 2013, bringing several separate instances of discrimination on university campuses together. An organisation called Universities UK (UUK), a representative body for British institutions of higher education, released a guidance document on hosting external speakers at university events. Its most controversial bit related to a hypothetical case study, where, say, a radical preacher might visit a university and request that men and women be seated apart: ‘Assuming the side-by-side segregated seating arrangement is adopted,’ the document said, ‘there does not appear to be any discrimination on gender grounds merely by imposing segregated seating.’

Outraged, Bhatt instructed lawyers to press for a judicial review on grounds of discrimination; UUK withdrew the hypothetical situation from its guidelines temporarily to seek further advice. Contacted for this story, UUK says it is unable to comment on the matter while seeking legal advice. Bhatt says she is pursuing the issue to make sure that this doesn’t happen again—that the so-called hypothetical case study is withdrawn permanently. She does not see this as a Muslim issue: “It involves all religions and affects all women. Religious freedom is very important, but not as important as gender equality or human rights,” she says. “Segregated seating is symptomatic of the real rise of religious fundamentalism in the UK, and bodies such as UUK, which should be defending minorities, are instead supporting them.”

Many apologists have compared such segregation with the creation of spaces like women-only and faith-based schools and colleges in the UK. But this is a lazy argument—the latter were intended as spaces for women in fields of activity and education that had historically kept them out. “These guidelines will also have a disproportionate impact on minorities where women already struggle to assert their right to equality,” says Bhatt.

Off campus, the issue of veiled Muslim women has seen heated exchanges. In 2006, British Prime Minister Tony Blair’s foreign and home secretary Jack Straw spoke out against the full veil—from head to toe—saying it was bound to make relations between Muslim and non-Muslim communities more difficult. This was a bold statement for a member of a Labour government that had made multiculturalism the lynchpin of its vision of a cohesive, empathetic Britain, lived in by people with different faiths but shared values. He had not, as was wrongly reported, asked for a ban on the veil. Faced with flak, Straw later apologised for what he said, but, in his memoirs published in 2012, said he was glad he had been brave enough to raise the issue.

Many Britons agree that this is not just about women’s rights, but about securing Britain from the threat of religious fundamentalism. Appeasement, they say, has proven itself ineffective as a policy in the face of rigid belief systems. Britain’s current Prime Minister David Cameron of the Conservative Party has recently said he was ‘absolutely clear’ that universities should not permit gender segregation. This sounds heartening, yet his government is the most religious in many years. He has appointed a minister of state for Faith, Baroness Warsi, who recently boasted that Britain has one of the ‘most pro-faith governments in the West’. The eagerness with which it is opening new faith schools—at least 25 this year—compounds this. Cameron might have condemned gender apartheid, but he has not addressed the factors that allow these grotesque inversions of the country’s ideals.

Maryam Namazie, a spokesperson for the Fitnah-Movement for Women’s Liberation, a signatory to the letter to the EHRC, however, is certain that gender equality is not in conflict with religious freedom. ‘If anything can be learnt from the recent fight (and small victory) against the endorsement of sex segregation at UK universities, it is that gender segregation has nothing to do with the right to religion; after all, ordinary Muslims (not a homogenous group by any means) manage to go about their lives while freely mixing with the opposite sex all the time,’ she writes in email response to my questions, ‘Of course, it is not just Universities UK. Whilst many got it right this time around and opposed the UUK’s position that sex segregation is a deeply-held religious belief, many— including the British government— have got it wrong countless times before. Which is why the UUK thought it could get away with endorsing gender apartheid, and why Islamists can dare to speak of ‘women’s comfort’ (as they sit far enough away from men), while waging an all-out war on women.’

At the intersection between religious freedoms and gender equality, the body entrusted to support the British university system appears to have bowed to a few extremist, outmoded and unashamedly discriminatory whims. ‘Freedom’ here in the UK, as in every nation state, is defined by an evolving array of explications and limitations. In this instance, the UUK was quite clearly privileging freedom of religious expression, which is enshrined in Britain’s laws and throughout the systems that govern it, over the rights of women. The latter are similarly protected by law, if not always by reality.