Nitya Kallivayalil: The biographer of galaxies

Award winning astronomer Nitya Kallivayalil is on a space odyssey. What is it about near-field cosmology that keeps her going? 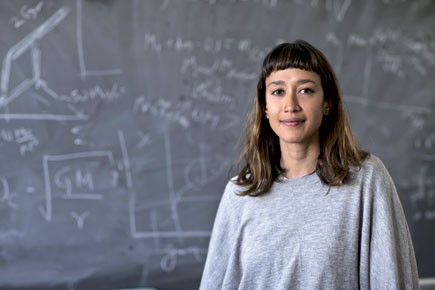 How much do we know about our neighbours? Thirty-five- year-old Nitya Kallivayalil, assistant professor of astronomy at University of Virginia and a promising star in her particular galaxy, recently became the recipient of the US National Science Foundation’s instrumental Early Career Development award, worth Rs 4.6 crore, for research spread over five years. This recognition speaks to the patient trajectory of astronomers, whose work accumulates slowly, over a lifetime; they are dealing, after all, with systems that are light years and, indeed, lifetimes away.

The young astronomer has won several grants towards her research in areas such as galactic structure and dynamics and dwarf galaxies—including one from the National Aeronautics and Space Administration (Nasa), having earned attention for her research on the forms and movement of constellations. One of her grants funded her use of the Hubble Space Telescope, the ground breaking, high-precision instrument which celebrated 25 years in low Earth orbit this year. Hubble helped Kallivayalil study the Orphan Stellar Stream, which is in the process of merging with the Milky Way, and the dark matter content of our galaxy. ‘Her work on the motions of the Magellanic Clouds revolutionized our understanding of the origin of these companion galaxies to our Milky Way and is widely regarded as a technical tour- de-force. She is one of the world leaders in “near-field cosmology”, using nearby galaxies to constrain the global properties of the universe and the origin of all large structures,’ states Craig Sarazin, astronomy department chair at her university, in an official report.

Taking a break at her desk, Kallivayalil speaks to Open over the phone. How prepared are we to move planets, I have to ask at one point. She may be amused, but she doesn’t let it show. “My specific research can’t really address this,” she replies, “The distance between our sun and our next neighbouring star is huge; within a given person’s lifetime, there’s no way we could get to the next star. But I think our understanding of the types of systems around which planets such as our earth form, has gone through huge advances, because of things like the Kepler (a Nasa space observatory intended to discover Earth-like planets orbiting other stars). We have found out that planets are ubiquitous. Since I study dwarf galaxies —the stars in these galaxies tend to have different chemical evolution than in more massive galaxies like the Milky Way—I would definitely be interested to see what kind of planetary systems exist there. I think one thing that is somewhat interesting, actually, is the sort of diversity of atmosphere, even in our own solar system. We are finding that the moons of Jupiter and Saturn are interesting places that might host interesting chemistry, that we haven’t really known about till now. As far as the field goes, being able to detect so-called biomockers in extra-solar planets is where we are headed—you wouldn’t be able to go and visit, but we are building up statistical evidence of life.”

Kallivayalil does not often get to visit her home state these days, but she grew up in India; before the United World College of the Atlantic in the UK, she studied at Pallikkoodam, Kottayam, and Lawrence School, Ooty. Previously a Pappalardo Fellow at Michigan Institute of Technology, she then earned a BA in Physics at Mount Holyoke and a PhD in astrophysics at Harvard University, whose astronomy department is part of the Harvard-Smithsonian Center for Astrophysics.

“I think I got into science from purely intellectual curiosity,” she says. “Always as a kid, I was fascinated by the big picture questions: how will it begin, end? I got these books when I was quite young by Richard Feynman, and specifically he investigates what caused The Challenger to crash. I remember loving those books as a kid. I made up my mind then and there that I was going to become a scientist, whatever that meant. Being able to posit a theory and that you could test it —it made a lot of sense to me.”

She focused on physics and astrophysics early on. “I was really interested in particle physics as well. What are the actual particles the universe is made up of? I was really taken with the perhaps simplistic notion that there could be one grand unifying theory for the whole universe. I thought astrophysics was the best combination of practical physics and big picture questions.”

One of her projects allowed her to measure the internal kinematics of the Small Magellanic Cloud, a satellite galaxy of the Milky Way interacting with a companion galaxy, the Large Magellanic Cloud. Kallivayalil’s work probes these neighbouring galaxies. “They are two satellite galaxies near us—like the moon is to the earth, except we are talking about galaxies.” This is a confusing name, she explains, “because they are not clouds; they are called ‘clouds’ because you can see them with the naked eye. That’s how they got the name, because they look like nebulous clouds. They do have a stream associated with them, called the Magellanic Stream.”

This is a very prominent gas stream made of neutral hydrogen, she explains, which is associated with these two galaxies, and no stars have been found yet, associated with this stream of gas. Kallivayalil goes on at some length, asking, “What actually caused this stream of gas to be stripped out from these two galaxies? There were a lot of theories, and that’s how I started my project: to measure their tangential motion.”

Her plan was to use the Hubble to measure these tiny motions. “The fact that the telescope was in space helped us out— because it is above the atmosphere, it’s stable—so the precision we were able to achieve to make these measurements, was equivalent to being able to measure the rate of human hair growth at moon distance; that is, if you picture a man or woman on the moon.”

A beautiful image. “This is where the technicality comes in. What happened is when we actually measured the tangential motion of these galaxies, it turns out the small and large Magellanic Clouds have not been long-term companions of the Milky Way. This has really changed our understanding of how the Magellanic Stream may have then formed .”

Is it difficult at times to explain what she is doing? “Your work is only worth what you can explain to others,” she says. “One thing people might find hard to relate to is the huge variation in distances involved in astrophysics. There are so many different length scales involved.” This scale might be intimidating, I suggest; as it certainly is to the lay person. “I am trying to measure small displacements in the sky—the displacements are small because these objects are very far away and therein lies the technical challenge. I don’t find it daunting. You have to come with new ideas. What’s new technology or a new approach which will allow us to measure these displacements in a novel way; is there some sort of new idea we could make use of, which could lead to a major change in the way we make these types of measurements? The goal is to do really creative research.”

There are still less women in her field than is ideal, she agrees. “It is a concern, we really want this field to be reflective of the underlying population. As part of my grant, that’s one of the other things I’m hopefully going to be able to make some good progress on—specifically I’m going to be starting a major collaboration with an undergrad college, a women’s college, hopefully a way for me to funnel women, minority women, into our field. We have to ensure that future leaders in the field come from every walk of life.”

Grants like this Early Career award are huge for people in Kallivayalil’s field. They support students and post-doctorate researchers, help set up research groups and aid researchers in undertaking major projects that often secure them tenure. “Thus far I’ve been working with two undergraduates and a post doc, but now this grant will let me hire a young group of both undergraduate and graduate researchers and train them, learn techniques on the telescopes,” she says.

Are there opportunities for collaborations with India? “I think that’s a great idea,” she says. “I’m fairly young in the field, but this is definitely something I am interested in pursuing.”

In her second year as a faculty member, Kallivayalil will be at conferences through the summer. “One is specifically on stellar streams in the Milky Way, at Ringberg Castle, south of Munich.”

One step for womankind, an inter galactic leap for humanity.