Nepal Earthquake: When the Mountain Roared. Cracked. And Killed 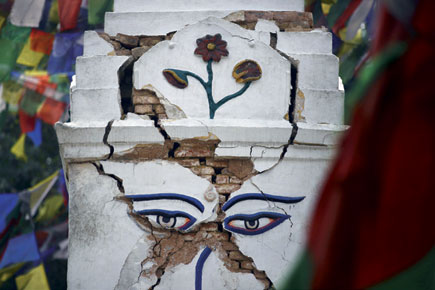 Geology is destiny, or so did the living realise as the ground beneath their feet ruptured. In the tiny Himalayan state of Nepal, a place made poorer by political instability and apathy, the mid-morning tragedy of 25 April, as it was whenever man’s ineptitude accelerated nature’s fury, the poorer were the worst hit. They died under the rubble of ramshackle buildings, and in Kathmandu and beyond, the magnitude of death and destruction unfolded slowly. By the time the aftershocks of the seismic horror swayed the global conscience, Nepal had already become a wasteland of the orphaned and the dispossessed, the stirrings of anafterlife from the heaps of mud, wood and bricks too feeble to be heard.

The hands that want to ‘wipe the tears’ of a land shaken and shattered are reaching out, and, as each passing day reveals the size of loss, Nepal in grief is on the longest road to reconstruction. It needs all the help, a lot more hands of consolation and compassion, and it needs to display a national resolution to rebuild, keeping in mind the discomforting scientific truth that the future is shakier. After such knowledge, for Nepal and its neighbours, including us, there can only be the will to be safer as, from the depth of its bowels, the earth sends us messages of mortality. In building our future, let us not be helpless in the face of nature’s mightier spasms.