For all her mushiness, how did Pakistan-born Mushaal Mullick fall in love with Kashmiri militant-turned-separatist leader Yasin Malik? The inside story. 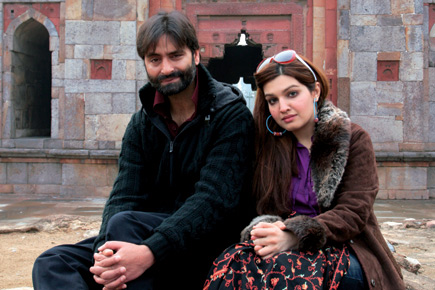 How did Pakistan-born Mushaal Mullick fall in love with Kashmiri militant-turned-separatist leader Yasin Malik? The inside story.


Mushaal is the kind of face the cameraman would pick up in a packed cricket stadium. She is the sort of girl who would keep as souvenirs the cinema tickets of her first-ever date. She is a girl in whose purse you’d find a mirror, a comb and, perhaps, lip salve. She likes Phil Collins and Shakira, and in poetry her taste varies from Rumi to Sylvia Plath. She is, you’d say if you ever met her, full of life. She has a teenage intensity, if there is any such thing. She writes the way she speaks, and like most youngsters, likes to be on Facebook, adding friends so frantically you would think she is on an undercover mission to make the Facebook server collapse. She writes ‘you’ as ‘u’ and makes careless mistakes such as referring to her school principal as ‘principle’ in emails. The 24-year-old Mushaal was in Delhi recently, with her husband, former militant and now Kashmir’s prominent separatist leader, 43-year-old Yasin Malik. “You could write that Yasin is an Aries and I am a Scorpio,” she told me. And, before I could react, she blurted, “Oh, forget it! It will look so childish.”

Mushaal and Yasin will celebrate their first marriage anniversary in February. She will be in Pakistan, perhaps at a spa, while Yasin would be in Kashmir, at his ancestral mud house in downtown Srinagar’s Maisuma locality, trying, perhaps in vain, to speak to his wife. Kashmir is Kashmir, and establishing contact across the border is difficult. Borders don’t understand love and marriage anniversaries. But how did love happen, then? And marriage? That story in itself runs like a Bollywood screenplay.

In 2005, Yasin Malik had gone to Pakistan to forge support for the freedom of Kashmir. It was there, during a function, that Mushaal heard him recite Faiz in his speech. She was accompanied by her mother. “I went up to him and said I liked his speech,” recalls Mushaal. “We shook hands and he gave me his autograph.” Malik asked her to bring her friends along to his signature campaign in support of the Kashmiri movement.

A day before he was to return, Malik called on Mushaal’s mother’s mobile. They took it as a courtesy call. “My mother told him that our prayers are with him, and in response, Yasin asked to be put across to me,” says Mushaal.

The two fumbled a few formal pleasantries to each other before Yasin Malik said those three words, in English, as Mushaal remembers: “I love you.” “I asked him whether he liked Pakistan. He said ‘yes, especially you,’” says Mushaal. She remembers getting so nervous in her mother’s presence, she had to move aside towards the window on the pretence of a weak mobile signal. There, Malik said it again, this time in Urdu. There was no doubt left in her mind now. But she was so scared (“Yes, scared”) that she rang off. Malik tried calling again, but she switched the phone off. “I was speechless, and my mind would just not work,” she says.

Mushaal comes from a very affluent family of Pakistan. Her late father (he died of a heart attack in August 2002) Professor MA Hussein Mullick was a renowned economist who headed the economics department at Bonn University, Germany, at one time, and was the first-ever Pakistani to serve as a Nobel Prize jury member. Her mother Rehana Hussein Mullick is former secretary general of the women’s wing of the Pakistan Muslim League. Her brother is a foreign policy analyst in Washington DC. She herself is pursuing a bachelor’s degree in economics from the London School of Economics.

Yasin Malik comes from a humble background. At a young age, he was one of the first five men who crossed the border in the mid-1980s, and later started an armed insurgency in the Valley. He has been arrested hundreds of times, and in the initial years of his incarceration, he was tortured badly. He suffered facial paralysis, deafness in his left ear and damage to one of his heart valves. Since the mid-1990s, after his release on health grounds, he has been espousing the cause of Kashmir’s freedom through non-violence. He has had little school education, and lives almost a Spartan life in his ancestral house. Marriage never figured in his scheme of things. There was parental pressure since he is the only son, but he would rather recite a UN memorandum than a nikaahnama (marriage deed). But when he saw Mushaal, Malik says, it was love at first sight. “I decided there and then that if I were to marry ever, the girl would have to be her,” says Malik with a loving gaze for his bride.

Shortly after she had rung off that phone, Mushaal says she dreamt of her father and grandparents. She says she took this dream as some sort of spiritual intervention. Soon afterwards, she got on MSN chat with Yasin. Slowly, flames of love (“and Yasin’s intensity”) would consume her. The challenge now was to break this news to her family. Mushaal doesn’t speak much about her mother’s initial reaction. But she says her mother was very apprehensive. “She said she respected his struggle but feared that he might be put in jail again,” Mushaal says.

It was later that her mother met Yasin’s mother at the Haj pilgrimage, and the marriage was finally settled. The two got married on 22 February 2009 in Pakistan.

Her friends were in for a shock when she broke the news to them. “They wouldn’t believe it. They thought he was like the Taliban. And some of them scoffed at his dress sense,” she says. “Now, of course, he dresses better,” she says laughingly, “I guess it happens after one gets married.”
In Kashmir as well, the news of their engagement was met with disbelief. It even invited the wrath of separatist leaders like Asiya Andrabi, leader of Kashmir’s all-women organisation Dukhteran-e-Millat. “If he talks about azaadi, Yasin should have married one of the widows who lost their husbands to jihad in Kashmir,” she remarks. Mushaal’s paintings also came up for ridicule, with media reports spicing it up by calling her a ‘painter of nude drawings’. But, unfazed, the two went ahead and got married.

In September last year, Mushaal finally flew to Kashmir Valley for the first time with Yasin by her side. “The aerial view of Valley was so breathtaking, I screamed with excitement,” she says. It was a Sunday. Upon reaching Maisuma, the couple was welcomed by hundreds of people. Soon, it would take the form of a procession. Young boys danced while women sung traditional Kashmiri wanwun (traditional wedding songs) to welcome the leader’s surprise bride. Rose petals and sugar candy were showered as the couple entered the narrow alley where Yasin Malik’s house stands.

Was she shocked when she saw the house? After all, it is one of the oldest houses in the locality, entirely made of mud. “Yasin had given me a grimmer picture,” Mushaal smiles. “It was so fascinating to look at the house, at the room where Yasin was born, and where his children will play,” she says, dreamily. “It’s so cute,” she adds.

The most touching scene, Mushaal says, was of Yasin’s mother coming down to welcome her. The two had not seen each other before. “When she saw me she began to cry, and I don’t know what happened, even I broke down,” says Mushaal. The couple roamed around town and went for what Mushaal calls a “spiritual honeymoon”, visiting eight of the most-revered shrines of Kashmir.

As of now, Mushaal is back in Karachi. But she says she will be back soon. “I want to work for the orphans and widows of the insurgency; maybe, I could open up a small vocational centre for them.”

The previous day, while speaking at a seminar, Yasin Malik was heckled by a group of angry protestors of the minority Kashmiri Pandit community who hold Malik and his organisation Jammu & Kashmir Liberation Front (JKLF) responsible for the killings and subsequent exodus of Pandits from the Valley. This has happened many times before (read The Serial Agitators). But it was for the first time that Mushaal was witness to it. It has disturbed her. Yasin does not talk much about it, but he says he feels hurt. He has been trying hard to woo Kashmiri Pandits back, visiting them at times in Jammu refugee camps. In recent times, he has urged them to return to Kashmir, saying that Kashmir was incomplete without them. “So, who is Sarla Bhat?” Mushaal asks me (Pandits accuse the JKLF of kidnapping the nurse in 1990 and gangraping before killing her brutally on a mechanical saw). I tell her about the murder. She is shocked, and in a matter of seconds, tears swell in her eyes. I change the topic.

One thing would be clear to those who have known Yasin before: after marriage, he has become very patient. That is evident in the way he poses for my colleague Shome Basu.

“Oh come on now,” Mushaal urges Yasin, “You look handsome.” He smiles, one of those rare instances. While Mushaal is posing happily, Yasin and I talk of Naxalites. He is curious about an interview I had recently done with the Maoist supreme commander Ganapathi. He asks me about China’s alleged support for Naxalites. “Maybe China is using them the way Pakistan used us,” he says matter-of-factly.
Meanwhile, Mushaal is done with the photos. “Did you watch 3 Idiots?” she asks. “By the way, we did last night,” she says, “but we left after the interval.”