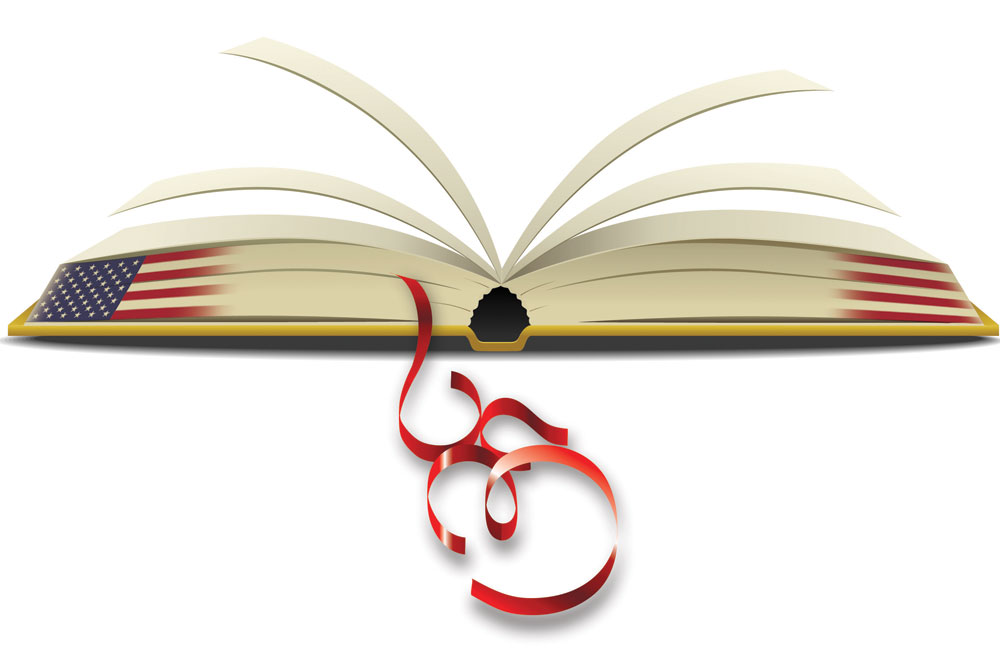 ABOUT A MONTH ago, a long-simmering issue among Indian-Americans came to a boil. The state of California in the US is currently in the process of updating and revising its school textbooks. And on 24 March, the board’s advisory body, the Instructional Quality Commission (IQC), approved suggestions (among others) to replace the term ‘India’ with ‘South Asia’ whenever the country was being discussed before Independence, and ‘Hinduism’ with ‘ancient Indian religion’ wherever its avatar in the ancient past was referred to. To several Indian-American and Hindu groups, this was the latest salvo in what they consider a long tradition of misrepresenting and humiliating Hinduism and India in US textbooks.

A campaign began to gather force against this move. Hindu groups began to object to these changes. An online movement called #DontEraseIndia was started. Another, an online petition seeking to reverse these changes, which has since garnered close to 25,000 supporters and led to much debate, also began doing the rounds. Outside the California Department of Education’s building in Sacramento, on 24 March, as the fear of IQC’s accepting the edits began to accelerate, Hindu-American parents and students gathered holding placards. Some of them read, ‘Did Columbus go in search of South Asia?’ and another, ‘Dignity for Hindus’. During the public meetings earlier where recommendations were being heard, several Indian-American students turned up at the state capital, many in tears, telling the authorities that using ‘South Asia’ instead of ‘India’ would be tantamount to erasing their heritage. Explaining the root of their frustrations, Suhag Shukla, executive director and legal counsel of the Hindu American Foundation, one of the main groups opposing these changes says, “The understanding of India and Hinduism [has] long been plagued with Orientalist and Eurocentric narratives… This is why Ancient India and Hinduism are reduced to things like ‘discuss the Aryan Invasion; explain the major beliefs and practices of Brahminism in India and how they evolved into early Hinduism; and outline the social structure of the caste system’.”

But around this time, something else also began to happen. The scholars who had suggested these edits to the body, an interdisciplinary committee of South Asian academics under the name South Asia Faculty Group (SAFG), began to rally support as well. A movement by South Asian groups, many of them representing Sikhs, Dalits and Muslim groups, began to galvanise opinion in favour of the SAFG. They claimed that what the Hindu groups were really campaigning for was something sinister. The attempt, they claimed, was a revisionist version of Indian and Hindu history— an attempt, according to them, to sanitise references to the caste system and its link to Hinduism, to remove references to patriarchy, and to establish the myth of India as solely a Hindu nation from time immemorial. They started their own online campaign and petition under #DontEraseOurHistory. “We wanted to counter the PR machine of the Hindutva groups who are deliberately whipping up a false controversy to hide their real agenda,” says Thenmozhi Soundararajan, a Dalit-American artist and activist who is a member of the Ambedkar Association of California.

According to the SAFG and like-minded groups supporting them, after attempting to saffronise history textbooks in India, the far Hindu right is now trying to do something similar with references to India and Hinduism in the US.

It is a full-blown ideological tussle over the South Asian section of the syllabus framework that will serve as a guide in the preparation of grade 6 and 7 history and social sciences textbooks. And the State Board of Education in California is soon expected to decide one way or another.

IN NOVEMBER 2003, an egg flew out of the audience towards a stage at London’s School of Oriental and African Studies. It narrowly missed the speaker, Sanskrit scholar Professor Wendy Doniger. After the lecture, she was heckled by several members of the audience who claimed that as a non-Hindu, she had no right to comment on Hinduism. To Professor Sudipta Sen from the University of California, Davis, this was a pivotal moment in the coming together of Hindu nationalist forces in the West. “This incident… galvanised the Hindutva movement in the US led by Rajeev Malhotra of the Infinity Foundation and Aseem Shukla of the Hindu-American Foundation who spearheaded the protests against [Doniger’s] book, The Hindus: An Alternative History, being nominated for a National Book Critics Circle Award,” Sen says. According to him, the outrage expressed at Doniger exemplified the sentiment that the US academia systematically distorted the teachings of Hinduism because of the alleged racist attitudes of foreign scholars and that it harbours and encourages ‘anti-Hindu’ scholars.

The ‘South Asian’ movement has tended to downplay India, and in turn, Hindus

As the years progressed, the fight over the representation of Hinduism and India within academic circles in the US, both in schools and higher institutions, became increasingly confrontational. In 2005, when school textbooks were being updated in California, according to Professor Michael Witzel from the Sanskrit department at Harvard University, Hindu-American groups like the Hindu Education Foundation and the Vedic Foundation submitted several revisions, including the substitution of the term ‘castes’ with ‘social classes’, sentences like ‘Men had many more rights than women’ with ‘Men had different duties (dharma) and rights than women…’ By the time Witzel became aware of the edits, many of these revisions had been accepted. After he objected, the edits were re-evaluated and many of them were rolled back. As a result, a lawsuit was also filed against California’s board of education.

In the last two years, Hindu groups have had their way and prompted the adoption of new school textbooks in Virginia and Texas, which reportedly enhance the way Hinduism and India are depicted. This tug-of-war over depiction came to the fore within academic circles in the US earlier this year when the University of California at Irvine refused a substantial donation to set up four chairs in South Asian Studies. The gift of $1.5 million by the Dharma Civilization Foundation (DCF) had been met with protests from students and faculty. The unease came from DCF’s alleged close relationship with the Rashtriya Swayamsevak Sangh (RSS) in India and its US affiliate, the Hindu Swayamsevak Sangh (HSS), in addition to and its stated condition, according to media reports, that scholars who receive grants from the Foundation must ‘imbibe the spirit of Hindu ethos in their personal lives’ and must not be ‘confused and distorted by secularism’. The committee set up to look into the donation said, among other things, in a 18 February report, available online: ‘…We are particularly concerned about any language that implies that religious affiliation or participation in religious events is a prerequisite for chair holders.’ Kalyan Viswanathan, executive vice-president of the Dharma Civilization Foundation, declined to comment.

MUCH OF THE current impasse centres around whether the region that now includes modern-day India, Nepal, Bangladesh and Pakistan should be referred to as India, or as the SAFG recommends, South Asia. According to Shukla, the term ‘South Asia’, beyond being a geographical term, is political. “While it stems from a seemingly well-intentioned effort to be inclusive of the region’s other countries, in order for it to be so,” she says, “the ‘South Asian’ movement has tended to downplay India, and in turn, Hindus. In the context of the framework, not only are India’s civilisational and cultural contributions minimised, but also those of other countries essentialised.” The HAF claims that by equating Indian civilisation with ‘South Asia’, the SAFG imposes upon other countries a history to which they don’t wish to associate with. “Case in point—Pakistan,” Shukla says. “Pakistan was founded on the explicit premise that it shared a greater connection with… the ‘Islamic world’ than with ancient India.”

The current issue also touches upon old arguments around the way Hinduism is projected, including the depiction of the caste system and women’s role in ancient society. HAF’s recommendations have sought to substitute the term ‘Untouchables’ with ‘certain socially ostracized and economically disadvantaged communities’. When asked, Shukla explains that the term ‘untouchables’ is inappropriate, since it is prejudicial and a demeaning term created by the British. Furthermore, caste should be explained as a phenomenon of the South Asian region and not something that emerged from Hinduism. According to her, there is an overemphasis on caste, coupled with the absence of descriptions of similarly disadvantaged groups occupying low social positions in other cultures and religious communities. On the other side of the ideological spectrum, several scholars say that this argument that ancient Indian history and Hinduism are unfairly picked for scrutiny is incorrect, since several other cultures and regions are also discussed. “There are discussions about persecutions of people in other parts of the world, the role of women in several societies. Yet they say they are being singled out,” Professor Witzel says.

There have been several other debates during this process of upgrading textbooks. But it is the South Asian section of grade 6 and 7 books that has generated the most heat. One of the points HAF brings up is how the poor depiction of Hindus and Indians leads to stereotypes and bullying in classrooms. The group claims to have conducted a national survey of bullying in American classrooms which reveals stereotype-fuelled bullying of Hindus. “We’ve heard instances of teachers instructing their students to divide into four groups (the four ‘castes’), and [asking] the Brahmins to look down upon or be cruel to the others, and the Shudras that they can only be servants and nothing else,” Shukla says. “Students have reported having meat thrown onto their trays or being told they are damned to hell if they don’t convert.” To scholars from the SAFG and their supporters, the current fracas is part of a well-funded and organised political campaign. “It is not so much that India and Hinduism are new subjects taught in US school curricula, but that there is an unprecedented amount of attention given to the treatment of India and Hinduism in textbooks,” Professor Sen explains. “These groups are trying to establish their authority as the only spokespersons for the cultural heritage of Indians and Hindus, and their legitimacy derives from the claim that US educational institutions and textbooks are insensitive to the rights and aspirations of the Hindu minority.”

California is one of the largest textbook markets in the US. How the board decides the matter will probably have an impact beyond this West Coast state, since textbooks that are based on its framework may well be used elsewhere too. “We are still awaiting the ultimate outcome key edits, but we are afraid that the Board might end up making certain decisions about textbook material under the duress of lawsuits,” Professor Sen says. The scholars who have tried to resist what they term ‘right-wing Hindu forces’ in the US complain that they are routinely targeted. During the 2005 controversy over textbooks, Professor Witzel claims he was often abused online. Among the several threats received, he remembers one individual who emailed asking him to kill himself. Two hours later, the person emailed again, asking if he had fulfilled his request. The professor ignored most of those threats. Two years ago, almost 10 years after that instance, Professor Witzel, while trawling through his past emails, found those two emails. He wrote back saying, ‘I’m still around.’