Eye of the Storm

The Prime Minister of the UK is one-eyed, and the other eye is deteriorating. But neither he nor the Opposition thinks it reason enough for him to step down. 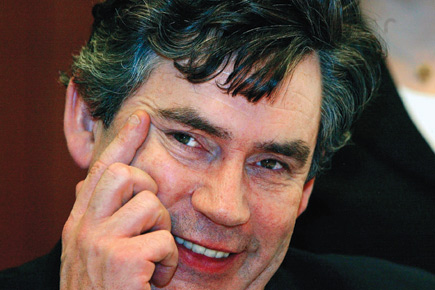 Prime Minister Gordon Brown’s latest challenge, as he gears up his party for an electoral showdown, is more physical than political: his impaired eyesight.


Prime Minister Gordon Brown’s latest challenge, as he gears up his party for an electoral showdown, is more physical than political: his impaired eyesight.

Prime Minister Gordon Brown’s latest challenge, as he gears up his party for an electoral showdown, is more physical than political: his impaired eyesight.

He is blind in his left eye. And he has weakened vision in his right eye. His recent visit to a hospital for an eye check-up caused a political furore, fuelling speculation even about his ability to lead the country, until 10 Downing Street decided to come out in the open with facts related to the check-up.

Doctors at the Moorfields Eye Hospital in London detected two retinal tears in his right eye. The doctors insisted Brown does not require any surgery. A hospital spokesman said: “His eyesight has not deteriorated and there is nothing to stop him getting on with his job.”

London was rife with speculation as the news spread of his visit to the hospital. Only a few weeks earlier, former minister Charles Clarke had raised the issue of Brown’s eye problems, even openly suggesting that the prime minister may quit because of his condition. Brown had to go on record immediately saying his eyesight was “not deteriorating”.

To quell further attention on the issue, 10 Downing Street went to the extent of issuing a statement following Brown’s visit to Moorfields: ‘This summer Mr Brown had his annual eye check up which was fine. Later he had his retina checked. After examinations surgeons found that the retina had two minor tears. However as there has been no further deterioration, and no change in his eyesight, they decided against further operations. Yesterday Mr Brown visited Moorfields Hospital as part of regular checks on his eyes and this check was also fine. Mr Brown wants to thank the doctors and staff of the NHS [National Health Service, the publicly funded healthcare system in the UK] particularly Moorfields Hospital. Were there to be any change, he would of course make a further statement.’

His cabinet colleagues rallied around him. Home Secretary Alan Johnson told BBC there was no question of Brown stepping down: “He is fit and well and able and determined and energetic.”

For once, the Conservatives left Brown alone, making it clear they would not turn his eyesight into a political issue. Shadow Defence Secretary Liam Fox said: “I think there are lots of reasons why Gordon Brown should not be the prime minister—this big build-up of debt, the refusal to give us the referendum on the Lisbon Treaty—but [am] not picking on his eyesight. To focus on this and to say that that would make him unfit to be prime minister is not the sort of politics we should be indulging in.”

The prime minister himself came to his own defence, telling BBC: “There is absolutely no deterioration in my eyesight. Although I have problems with my eyes and it has been very difficult over the years, I think people understand that I can do a job and work very hard. I feel that I have done everything to show people that I can do the job.”

Brown’s eye problems began during his student days, soon after he joined the University of Edinburgh, at age 16. In the first term, he was diagnosed with a detached retina. It was thought the damage was caused after he was kicked in the head during a rugby match at his high school in native Kirkcaldy, a small industrial town near the Firth of Forth in Scotland.

He missed out on his first term at university as doctors tried to save his eyes. Ultimately, he lost the sight in his left eye and retained impaired vision in his right eye. Since then he has been undergoing regular eye tests, aimed at retaining his single eye vision.

The effects of his weak vision are all too known, like the large monitor of his computer, the thick black marker pen for his scrawls and the extra large fonts his assistants use for preparing the prime minister’s briefing documents.

The latest discovery of two tears in his right retina are said to be minor, but doctors at Moorfields were unwilling to speculate on their progression.
Normally, the risk of retinal tears increases with age, and research shows that in the UK around 3 per cent of adults over 40 experience them. They occur when the jelly-like vitreous humour at the back of the eye peels away from the retina, the nerve tissue lining the wall of the eye. Tears serious enough to require treatment can be treated with lasers, cryotherapy or surgery.

Director of vitreo-retinal surgery at Moorfields Eric Ezra said: “Early diagnosis and treatment is essential. Without it, a torn retina can cause the entire retina to detach from the back of the eye, causing loss of sight. This might take weeks, but it can happen in a matter of days or even few hours.”
However, neither the hospital nor 10 Downing Street have confirmed if Brown underwent any non-surgical procedures to repair the retinal tears other than saying that he would need check-ups every four to six weeks.