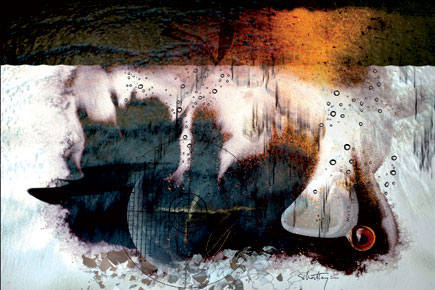 
A little boy on his way to church notices the bright reflection of the church in a lake. He tells his father that the second church is better. He wants to go there instead. The father tries to dissuade the child, but when he remains persistent, the father says, “Fine. Go in the lake, see what happens.”

I’m describing a poem to you. I’m paraphrasing, reducing the poem to a narrative. Having confessed my sin, let me now go on with the story. In the poem, the boy goes into the second church and notices that everyone is wet but no one is embarrassed about it. He likes it there. Except, after a while he notices that the faces around him are turning red. People are praying for air. The boy urges them to leave, to get out, and breathe.

I have read this poem many times over the past few months and am always surprised by the tight turns and details. There are hundreds of people drowning, mothers and sons, and an organ player. Bubbles are coming out of the pastor’s mouth. It is sort of beautiful, the boy thinks, and then ignores his own advice and dies alongside the other drowning parishioners.

The poem was written by my student, Mikko Harvey. He has just graduated from Vassar College and was awarded last month the Academy of American Poets Prize. I was used to reading smart, surreal, often whimsical, poems written by Mikko, but he held one more surprise for me. In the thesis he turned in at the end of the year, there was a poem about Dzokhar Tsarnaev, and it was titled My Inability to Pronounce Your Name.

The lines that caught my attention were the following:

‘We had the same history teacher. / She was pretty. / Did you notice? / You must have, the way she brushed / the bangs from her eyes. / So at what point did we become / different?’

Mikko’s poem, as it proceeds, turns on an examination of the small differences that lead to a destiny that is catastrophically distinct from another.

Mikko and Dzokhar were both students at Cambridge Rindge and Latin School. Mikko doesn’t remember ever having spoken to the younger Boston bomber, though he saw him in school all the time. I asked Mikko to tell me why he wrote the poem. He said, “I was trying to find out who he was after the fact of the bombing. Trying in a small way to understand the person behind the action. I couldn’t just dismiss him as a monster because we have so much shared history. Teachers say he was friendly and soft-spoken; they would say the same thing about me. He smoked pot and played Fifa; I did too. We had the same history and literature teachers. We pissed in the same urinals. There is this intimacy between us, yet also a great distance.” Mikko had an additional comment. He wrote to me that the week before the bombing, Dzhokhar had tweeted: ‘I really don’t like it when I have one ear pressed against the pillow and I start to hear my heart beat, who can sleep with all that noise.’ Mikko said, ‘This is so intimate, so human, almost poetic. When I read this tweet, I know I can’t dismiss him as a monster. I have to face the ways in which we are similar.’

I know that many will remonstrate that we all know, even from bad Hindi films, about evil men who love their mothers or who have charming failings. What is so attractive about Mikko’s stance is that he locates humanity in a shared history (“We pissed in the same urinals”) and yet says nothing to deny the mystery behind inhuman choices.

This attitude is a welcome departure from the certainties of experts who routinely refer to position papers that predict the regular turns on the road to radicalisation. The counterterrorism authorities are like the boy who mistakes the reflection for the real church. In the world made real or recognisable only on the basis of their theories, we have been asked to take the plunge and we are drowning.

As I sit writing these words, the news on the radio is of the start today of the military trial of Private First Class Bradley Manning in Fort Meade, Maryland. This trial is taking place three years after the arrest of the whistleblower who released hundreds of thousands of classified documents to WikiLeaks. Manning has already spent months on end in solitary confinement. He has denied the most damning charge of ‘aiding the enemy’ and helping Al-Qaida.

Will he get life in prison? If found guilty, will the judge impose the death penalty? This is the debate on the radio right now. But the real point that Manning threw up for debate through his actions is why the American administration did not regard the people of Iraq as human. As Daniel Ellsberg, the Pentagon Papers’ whistleblower, said at a protest for Manning during the past weekend, “He was concerned that the people of the world be informed of the way, as he put it, the First World or the West treats the Third World.”

This is how you and I first learnt of the work that Bradley Manning had done. On 5 April 2010, a classified military video was released by WikiLeaks showing the slaying of two Reuters employees and others by US pilots in an Apache helicopter. The video was shot through the gun-sights of the helicopter, and we watch the death through the fatal crosshairs in the centre. For an ordinary viewer of the video, it is difficult to adopt this dehumanising optic, as if all one surveyed was under a death sentence, every person merely a target.

And they are targets. As one of the voices on the video says, “Got a bunch of bodies layin’ there” and a little later, another voice adds, “Oh, yeah, look at those dead bastards.”

This was the horror that Bradley Manning exposed. The material he released to WikiLeaks revealed, if any further proof were needed, the murderous fraud that was the US-led Iraq War. We owe Bradley Manning thanks. I’d piss in the same urinal with him any time.

The author is the Helen D Lockwood Professor of English at Vassar College, USA