There are gaping holes in the armour of Al Gore’s Nobel Prize-winning global warming advocacy. 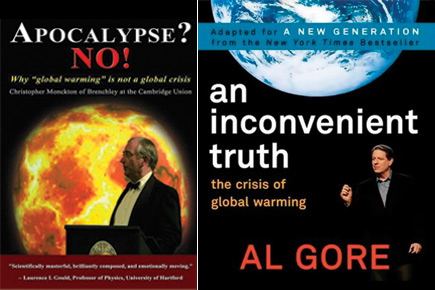 There are gaping holes in the armour of Al Gore’s Nobel Prize-winning global warming advocacy.


There are gaping holes in the armour of Al Gore’s Nobel Prize-winning global warming advocacy.

On 11 October 2007, a day before the Nobel Committee awarded the Peace Prize to former US Vice-President Al Gore, the London High Court ruled that there were at least nine ‘errors’ in Gore’s documentary An Inconvenient Truth, and that the film could not be shown to UK schoolchildren without a ‘guidance note’ that these statements in the film do not follow ‘mainstream scientific consensus’.

Sea levels will rise by 6m in the near future

Gore said that a sea-level rise of up to 6 m (20 ft) will be caused by melting of either West Antarctica or Greenland. However, this sort of rise can happen only over thousands of years.

Gore said that low-lying Pacific coral atolls are being inundated because of global warming, leading to the evacuation of several island populations to New Zealand. However, the atolls are not being inundated. Also, corals can grow at ten times the predicted rate of increase in sea level.

The snows of Kilimanjaro are melting

The melting of the Furtwangler Glacier at the mountain summit began 125 years ago. Temperature at the summit is an average of –7º Celsius.

It was over-extraction of water and changing agricultural patterns that dried the lake.

Katrina was caused by the failure of the administration of New Orleans to heed 30 years of warnings by the Corps of Engineers that the levees could not stand a direct hit by a hurricane.

Polar bears are dying out

Gore said a scientific study shows that polar bears are being killed swimming long distances to find ice that has melted away because of global warming. But the study mentioned just four dead bears, and they had died in an exceptional storm.

There was some bleaching in 1998, but this was caused by the exceptional El Nino Southern Oscillation that year.

Many errors, inaccuracies and exaggerations have been pointed out in An Inconvenient Truth. For instance, Gore said that flooding in Mumbai is increasing because of global warming. But rainfall data for Mumbai shows no increase in heavy rainfall over the past 48 years. Gore overstated the mainstream consensus estimate of the effect of carbon dioxide on temperature at least tenfold. According to him, 2004 set a new record for the number of typhoons striking Japan. This is untrue. On hurricanes getting stronger due to global warming, the facts show that over the past 60 years there has been no change in the strength of hurricanes, even though hydrocarbon use went up six-fold in the same period. Gore said the southern Sahara is dying because of drought caused by global warming. In 2007, there were record rains across the whole of the southern Sahara. In the past 25 years the Sahara has shrunk by some 300,000 square kilometres because of additional rainfall.

(Apocalypse? No!, a film made by British expert Lord Christopher Monckton, is the hardest-hitting attack on An Inconvenient Truth, pointing out these and many other mistakes.)