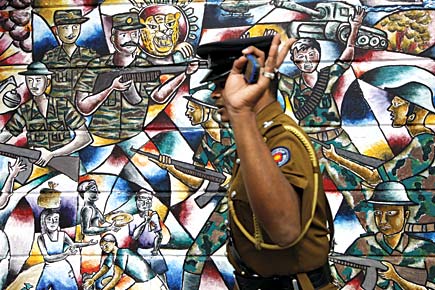 SRI LANKA IS like Kosovo of February 2008. And Colombo like Pristina. It is as if the country has just achieved independence. Prabhakaran is dead, and has been for weeks now. But the jubilation is far from over.

As government officials bask in the glory of the post-LTTE attention they are receiving, crowds cheer them on. The streets of Colombo are lined with Sri Lankan national flags. They are everywhere. On top of balustrades, outside booze shops, over security barricades, even inside broiler chicken shops. “When I saw all the flags and people,” says a Western tourist, “my first reaction was: Sri Lanka must have won a Cricket World Cup or something.”

And then, there are hundreds of billboards, marking a Leviathan presence. They feature President Mahinda Rajapaksa and his two brothers, the ‘three musketeers’. The most popular of these hoardings has the Sri Lankan President hugging his brother, Defence Secretary Gotabhaya Rajapaksa; for a moment you’d think he will break into tears of emotion and cry. Every vehicle has the President’s picture and the flag. An autorickshaw driver without such a display reports being stopped and admonished by a soldier for his lack of patriotism.

In the morning, Colombo’s proud citizens sing the national anthem on their way to work. In the evening, they do it again, also observing a two-minute silence for martyred Lankan soldiers.

Near the Foreign Ministry, the entire staff of a software company is out with water lilies, the national flower, in their hands. “Sri Lanka is freedom,” enthuses one among them, struggling with his English. There is palpable relief on the roads. In a city where life is governed by checkpoints and barricades, the prospect of their disappearance seems unreal.

It’s getting to everyone, it seems. A publicity officer, in charge of the accreditation of foreign journalists, marks some words out in a magazine report, snorting at the coverage. “This line shows how immature reporters are when it comes to our country,” he remarks, with a look on his face which suggests gleeful disdain. He can afford his manner; accreditation is important. As a friend working for a French newspaper quipped, “You cannot even piss without that card in your pocket.”

The card lets you to roam around Colombo, take pictures if you like, park your vehicle at hotels in the high-security zone. But that’s about it. It doesn’t permit access to the island’s north, where there are camps for internally displaced people (IDP), almost 3 lakh of them, Tamil refugees all.

The north has traditionally been Tamil territory, where the LTTE guerillas made their last stand, where large numbers of this beleaguered minority have lived lately along a 180-km stretch north to south in conditions that could turn anyone nauseous. Many are still there, and not just in camps. They cannot leave the place. Nobody can go in. Repeated requests for access to an IDP camp are met with a poker-faced ‘No’.

Determined to make a visit, we make a last attempt at the Media Centre for National Security, set up in a portion of the Colombo Swimming Club. Like other colonial-era buildings, its wooden stairs creak under your feet. There has been plenty of creaking lately. A horde of officers here are monitoring TV channels across the world, and, after every minute or so, they rush upstairs to the director’s office to update him.

Laxman Hullugalle sits in his office, his chair facing a huge Sri Lankan map. The northern areas are pinned by miniature national flags. Some of the Western media had been given access to an IDP site, but the reports were damning. “The President has asked us to immediately halt permission to journalists. He has been particularly angry about the BBC report,” he says. “We are not from the BBC,” I tell him. “But that BBC reporter was an Indian,” he replies. That’s that.

We travel to Vavuniya in northern Sri Lanka anyway, without security clearance, and despite government threats that journalists would be prosecuted for such temerity. The Army Chief was already displeased with foreign journalists thought to be working against his ‘homeland’, and a stringer for Reuters had been arrested from a camp and his camera confiscated. Another was brutally beaten up, and his beard and hair shorn.

Even aid agency workers are frustrated. Sarasi Wijeratne, an official with the Red Cross, worries about unclear procedures. According to Doctors Without Borders, nearly 2,000 patients at Vavuniya Hospital are packed into a space meant for not more than 400. The UK’s Christian Aid has forewarned that the camps are waiting for an epidemic to happen. The agency’s Sajid Mohammed, who visited some of the camps, speaks of 30 people cramped into tents meant for five. “Some of them looked as if they had not eaten for days,” he says. Definitive assessments are hard to come by, since the camps are believed to be crawling with intelligence sleuths who keep a close eye on information leaking out.

Nearing Vavuniya, Open managed to speak to some Tamil families in secretly arranged meetings. With spies keeping a stern watch over all Tamil-inhabited areas, indiscretion can prove people costly. One Tamil woman complained about the suspicion with which her Sinhalese neighbours looked upon her and her family, and how miserable this made them. Breaking into sobs, another woman said that some of her relatives were living in an IDP camp, and she had not heard from them.

Getting to Trincomalee, a former LTTE bastion in the eastern region, is difficult. “We don’t allow Western journalists at all,” says an army officer at one of the check points. Indians are fine. As one enters the main town, the ravages of war make distinct impressions; skeletal remnants of buildings riddled with bullets stand as a stark reminder of the 2007 battle here.

Maruthamuthu Sinniah, 61, has come back from India after 24 years. He had left with his family in 1985 when the war between the LTTE and Lankan forces was raging. One night, 18 of his relatives were killed by unidentified men. Now, he has returned with his wife to the place his house stood. It has been razed by the retreating Sri Lankan army. For shelter, all they have is a tattered UN tarpaulin. Another Tamil who has returned from India notes that the area has been resettled with Sinhalese families, newcomers to the place.

Such observations have raised fears of ethnographic re-engineering, with alleged incentives given to Sinhalese settlers to go north in large enough numbers to alter the region’s residential profile. Evidence of a plan may be sparse, but there are fears that Sri Lanka will adopt the Israeli settlement model, pressuring Tamils out of the few comfort zones they once had. That the army has declared its intention to increase its 200,000 strong force here by about 50 per cent is a bad omen. “This helps prop up domestic consumption, and it provides a huge force to control the north, and to help impose the government’s political and development plans on the north,” says Alan Keenan of the International Crisis Group.

In Trincomalee, a Tamil man speaks to us about living there. His business was gutted in the 1983 riots against Tamils that were perpetrated by Sri Lankan navymen. “You don’t know what kind of discrimination we are facing,” he says. “Please don’t quote me, they might just kill me.” The Tamil families in Trincomalee who have gotten away cheaply have merely been roughed up and forced to give cash for celebrations. Today, their fingers tremble as they summon courage to point to a new road being built from a Sinhalese village to a Tamil village, with several new settlers from the country’s majority community on either side.

In town, the authorities have declared four old banyan trees a ‘protected monument site’ right in front of a Tamil-owned cinema hall. The owner is too scared to speak up, but another man at the location doesn’t see the cinema surviving long. “They will take away everything,” he says, the cinema man weeping quietly behind him.