A Spectre Returns to Europe

Hard-edged nationalism and xenophobia of the 1930s are back in fashion in Europe, says British historian Frederick Taylor 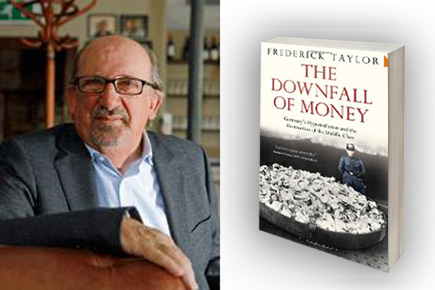 Hard-edged nationalism and xenophobia of the 1930s are back in fashion in Europe, says British historian Frederick Taylor

In the autumn of 1923, the Gold Mark, the German currency of the time, was trading at over 4 trillion to the dollar. Children played with bricks of currencies; unemployment touched an unimaginable high; and anti-Semitism wove a destructive web through German society. In his latest best-selling book, The Downfall of Money: Germany’s Hyperinflation and the Destruction of the Middle Class, renowned British historian Frederick Taylor dwells on the hyperinflation that hit Germany in the 1920s–considered one of the key triggers for the rise of Hitler. Comparing it with the current economic crisis, Taylor warns that the hard-edged nationalism and xenophobia of the 1930s are back in fashion in Europe.

Born in an England rising from the ashes of World War II, it was perhaps natural for Taylor to grow obsessed with war history and the rise of Nazism. Fascinated by the architects of war and people who had presided over the destiny of millions in the 1940s – such as Hitler and his propaganda chief Joseph Goebbels – Taylor went on to write books about them. But he wears his identity as a historian lightly. His spy thrillers – set in Germany, naturally – have been labelled ‘gripping and distinctly superior’ by The New York Times. The author read history at Oxford and Sussex universities, focusing on the rise of the extreme right in Germany in the early 20th century. The 67-year-old Fellow of the Royal Historical Society talks to Open about the morality of warfare and why Greece may do well if it abandons the euro.

Q Your book on the origins of the 1921-24 hyperinflation in Germany is a great read. How significant is the situation of the Weimar Republic (name given by historians to democracy established in 1919 in Germany replacing the imperial government) 90 years ago in today’s world?

A Like other European nations involved in the First World War, in 1914 Germany decoupled from the classical gold standard (full convertibility between paper money and gold) both to prevent a run on the country’s gold reserves and to enable unlimited printing of money in order to pay for the war. Germany, like the other countries (including Britain and France) assumed that it would win the war and thus be able to force the enemy to pay the bills. Then victorious Germany would go back onto the gold standard and regain its pre-war prosperity.

Unfortunately, despite four years of terrible suffering and sacrifice, Germany lost the war. In November 1918 the authoritarian government of the Kaiser was overthrown and replaced by a rather weak democratic government. The new regime promised the German people peace, prosperity and a fairer society, underpinned by a new social security system, but basically possessed neither the political nor the financial clout to fulfil these promises. Faced also with huge reparations demanded by the victors, the republican government could only keep its problems at bay by continuing to print more and more money. The fact is that the government of such a “welfare state” always has to find the money to pay for the benefits it has promised its people. The Weimar Republic was the first of the large industrialised countries to attempt to set up an advanced “welfare state” – under, as it happened, the most unfavourable circumstances possible – and therefore the first to encounter this problem. One sees similar problems everywhere today, especially in South American countries, as well as in the Mediterranean countries of the EU, especially Greece.

Q How different and similar was it to the current Eurozone crisis?

A The Eurozone crisis was, of course, largely brought about through certain countries either spending on welfare entitlements they could not afford (notably Greece, France and Italy) or allowing real-estate based lending bubbles to distort their economies (Spain, Ireland). The problems caused by these imbalances have led, among other things, to these countries becoming not just heavily indebted but also internationally uncompetitive. Had they not belonged to the Eurozone, governments would have traditionally tackled these problems by allowing their currencies to weaken (making them more internationally competitive) and their domestic inflation to increase (thus inflating away domestic debt). Germany did this after the First World War, thereby maintaining near-full employment and allowing German goods to compete on the world market, as well as inflating away massive domestic, especially government, debt at the expense of its property-owning classes. The irony is that the current crisis countries cannot do this precisely because the German traumatic experience of inflation in the 1920s has conditioned Germany to avoid inflation and devaluation at all costs. The afflicted countries in the Eurozone therefore have no choice but to undergo very strict austerity measures, combined with radical economic restructuring, a very painful process. So we have countries whose situation is not dissimilar to that of the historic Weimar Republic having policy dictated to them by the country which, having undergone the actual experience of the Weimar Republic 90 years ago, forbids them from choosing any of the usual strategies to solve their problems!

Q Do you think the current economic crisis in Europe may lead to catastrophic political events if it is not addressed properly? You warn that hard-edged nationalism is back in fashion. Is it ominous?

A There are hints in Europe of a return to xenophobia, nationalism, demands for protectionist policies and immigration restrictions of the 1930s. The rise of the nationalist right in France, Austria, Hungary, Italy and other countries – even Britain, Holland and Scandinavia – is worrying. Interestingly, Germany has the smallest far-right representation of any major European country. This is helped by the country’s current prosperity, but that is not the only explanation. Even ten years ago, when unemployment there was much higher and Germany was called the “sick man of Europe”, the far right parties did not prosper. And Austria, which does have a “hard edged nationalist” party with real influence, is as prosperous as Germany, so the purely economic explanation doesn’t work. Perhaps Germany did learn something from the experience of Nazism and war, while other nations have not. As for Greece, it is remarkable that a country which suffered so much under occupation by the Nazis should give birth to a neo-Nazi party, but then the country has always tended to polarise between radical left and reactionary right. Greece’s situation is the most desperate. Others like Spain and Ireland seem to be pulling things around. Regarding the future of the EU, it will be a test during the next few years whether an organisation containing so many disparate political as well as economic elements can survive. I don’t think, when the EU was founded in the 1950s, anyone anticipated such a poisonous revival of nationalism and authoritarianism.

Q Do you think countries such as Greece, Portugal, Ireland and Spain will do better if they abandon the euro?

A Greece might. The country has structural problems that may prove insuperable within this framework. Tourism, a crucial industry which has declined in the past few years, certainly would benefit from abandoning the Euro, which would make vacations cheaper. On the other hand, as many Greeks recognise, the discipline of the Eurozone might help the country to modernise. It is a question of just how bad things continue to be and whether the social and political stresses just become too great for Greece to continue. As for the other countries, I think it’s doubtful that they will or should leave the Eurozone. If Germany relaxes a little (which seems to be happening) and these countries pursue the necessary reforms, the overall balance of cost and benefit, even for these crisis-hit economies, remains positive.

Q You end with a warning – that “the problem for the world may be that Germany’s instinct is correct”. Could you please elaborate?

A I’m referring to the German instinct for financial rectitude. Deflation is the trend at the moment, of course, but even that is double-edged. While the basic tendency within the Eurozone is rigid deflation, it should not be forgotten that because of enforced ultra-low interest rates, the actual effect of policy on savers in the Eurozone, as elsewhere in the western world, is equivalent to that of inflation. Anyone putting money in a deposit account is losing money – I have seen a true negative interest rate of minus six per cent mentioned – at a rate that amounts, for savers, to the effect of quite serious inflation. On a recent lecture of tour of Germany I was surprised to talk to ordinary Germans who are thinking of investing in real estate or stocks and shares, since these offer a hope of profit where saving does not.

The last time Germans did this on a similar scale was during the 1920s. As for “quantitative easing” and all the unseen moneywhizzing around the globe, my instinct is similar to that of many Germans. In the longer term, this may lead to a return of inflation. Not the runaway hyperinflation of the 1920s – that came from war, revolution and political chaos – but the insidious inflation we suffered from in the 1970s, which undermines saving and investment and can cause political instability.

Q Was it hyperinflation or the Great Depression and deflation that contributed more to the rise of Nazism?

A The hyperinflation destabilised the country and turned millions, especially middle class Germans, against democracy. Hitler came to prominence at the time. Although ultimately Germany recovered from the hyperinflation and stabilised to some extent, it had to borrow a lot of money (especially from America). Weimar Germany became, as historians have called it, “the mortgaged republic”. When the depression hit at the end of the 1920s, it could not pay its debts. So the initial effects of the depression were worse than elsewhere, which enabled Hitler to make a spectacular “come-back”. We can also discern a subtle psychological process that had catastrophic economic and political consequences. After 1929, German politicians were so focused on avoiding a repeat of the hyperinflation that they conducted what one might call a “hyperdeflationary” policy. This meant that the country was worse hit than others and that it recovered less quickly. Had Germany begun to recover from the Depression a little earlier, it’s possible Hitler might not have come to power. This is one of the great “what-ifs?” of modern history.

Q What are you working on next?

A A book on the heavy bombing of the British industrial city of Coventry by the German air force in the November of 1940. This notorious air raid set a pattern for big and ruthless attacks on cities by both sides, culminating in the apocalyptic British raid on Dresden in February 1945. The question of the morality of this kind of warfare is something that interests me keenly. When we think of the pilotless “drones” now targeting alleged terrorists in Pakistan and Afghanistan, with all the “collateral damage” these attacks involve, this is an issue that remains very current.