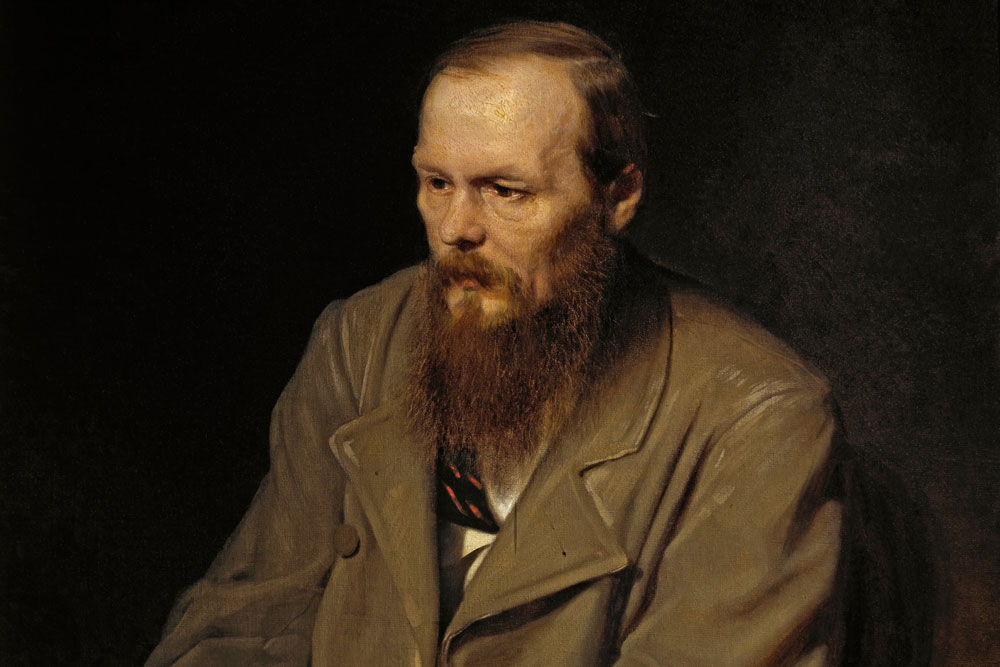 Four kilometres away from the opulence of St. Petersburg’s Palace Square and the Hermitage is a street that shows a more realistic side of contemporary Russia. Healthy and fashionable couples walk hand-in-hand past old women sitting on a pavement and hawking a range of items from woollen gloves to homemade chebureki, a meat-filled turnover that came to European Russia from the Islamic Tatars. The short path from a metro station named after Fyodor Dostoyevsky to Kuznechny Lane 5/2, where the great writer lived in the beginning and the end of his career, looks and feels eerily similar to the time when books like Crime and Punishment and The Idiot were written.

As the winter snow gently falls on St. Petersburg, the bells of the Mother of God of Vladimir Cathedral toll loudly near the building, where Dostoyevsky would write what many consider his greatest work- The Brothers Karamazov, as well as his novella The Double: A Petersburg Poem.

Around noon I enter the building that was converted into a museum in 1971. On a regular day in 1879, the writer would have been in the last stages of sleep at this hour. He was at his productive best late at night when the Russian Imperial capital was fast asleep. He would work through the night and go to bed in the early hours of the morning.

Born in Moscow in 1821, Fyodor Mikhailovich Dostoyevsky moved to St. Petersburg to enrol at the Nikolavesky Military Engineering Institute at the age of 15 and would live out a significant part of his eventful life in the city by the Neva River. 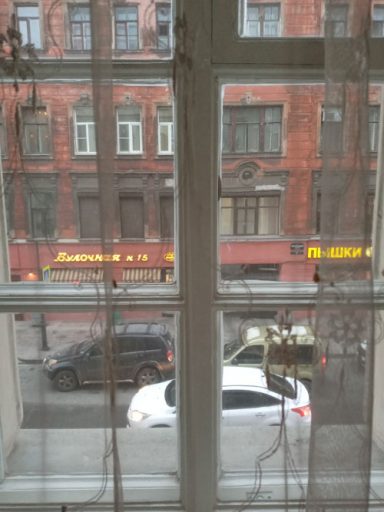 He first moved to the apartment in the building on Kuznechny Lane in 1846, right after the publication of his first book Poor Folk. His stay in this apartment would be brief. Three years later, Dostoyevsky was sentenced to death by firing squad for being a member of group that discussed banned books. The sentence would be commuted at the very last moment. The writer would go on to spend four years in a Siberian prison colony and then serve in the military in exile for six years. After his return to St. Petersburg, the writer changed residences almost 20 times before moving back to the apartment in Kuznechny Lane. Debt and a gambling addiction forced Dostoyevsky to write many of his most celebrated books in a hurry. By the time he shifted to the house, which is now a museum, Dostoyevsky was financially secure to a great extent. It was here that he had the time, energy and a mind relatively free of tension to work on The Brothers Karamazov.

As I enter the museum, a large group of enthusiastic 12-year olds deposit their winter coats at the cloakroom and block the ticket counter before their teachers lead them inside. As I am about to pay the higher entrance charges for foreigners, the lady at the counter asks (in Russian) my nationality and when I reply India, she tells me that I can pay the same price as locals as long as I speak only Russian inside the museum.

This was not my first visit to this beautiful museum, but each time I walk up the stairs, I get goose bumps thinking about how the great writer would use these very steps after coming home from meeting his wide circle of friends that included aspiring socialist revolutionaries.

What did all the 20-odd houses that Dostoyevsky chose to call home in St. Petersburg have in common? They were all in a street corner and had a view of a church. He liked to look outside from the window and study people who were at the crossroads. Dostoyevsky took the trouble to describe the physical features of his characters. Many of the writer’s heroes lived in corner houses. 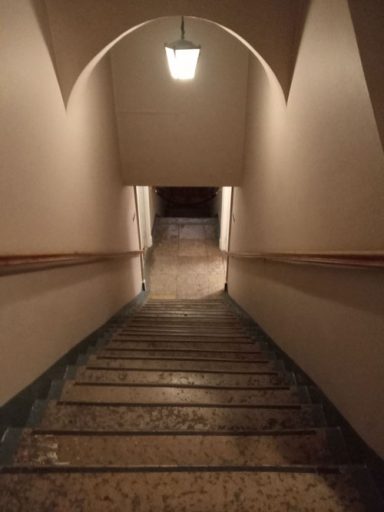 Drawn as I am to the furniture, lighting wall decorations, big clock and the writing table, I feel more inspired going to the same windows where Dostoyevsky went and looked out at the street. Snow begins to fall once again on the buildings outside and on the very church that I am sure that the great writer looked at again and again. More than 140 years later, the church probably looks a lot newer than it did back in the late 1870s.

But what about the people who pass those streets? Did any of them have some traits that resembled Raskolnikov or Myshkin, or maybe just physical features? The horse carriages of Dostoyevsky’s St. Petersburg were long gone and so were the costumes of the nobility of the city. But the weather, the light, the colours, the churches and fragrances (at least in the summer) of the city were still in tact.

As I fall into deeper thoughts, the church bells toll once again and for at least that one moment, I feel one with the writer. And then comes the group of school children and their guide, talking about the writer and his life and routine.

A pilgrimage spot for writers, it is important to understand and accept that everything inside the museum is a reconstruction. After Dostoyevsky died in 1881, a heartbroken Anna decided to leave St. Petersburg. She put most of their possessions in a warehouse for storage. Most of these items were lost. She donated a collection of her husband’s manuscripts, letters and photographs and donated them to a room that she created and dedicated to him at the State Historical Museum in Moscow. 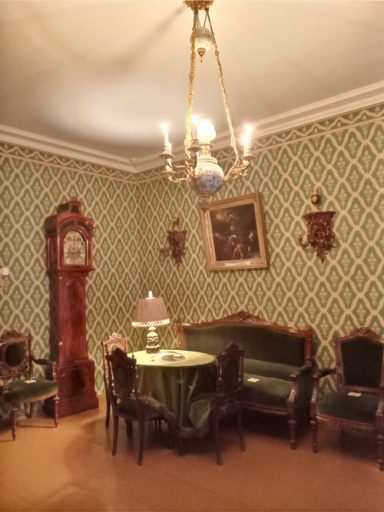 Anna wrote about the apartment on Kuzhnechny Lane, mentioning that it consisted of six rooms, a huge pantry for books, a lobby and a kitchen. Anna was not just a loving and all-understanding wife, but also a loyal associate, financial manager and personal secretary of her husband.

The museum was opened on November 11, 1971, the 150th birth anniversary of Dostoyevsky. Noted Soviet artist and architect Georgy Piontek was the brains behind the idea to convert the entire building on Kuzhnechny Lane into a museum. He overcame resistance from the authorities by convincing the then Soviet Culture Minister Ekaterina Furtseva to agree to his proposal.

Most of the exhibits in the museum were donated by the writer’s grandson Andrei Fyodorovich Dostoyevsky. Some family relics were also donated to the museum by Dostoyevsky’s great-granddaughter Maria Savostyanova.

A wide range of emotions

I walk away from the reconstructed study, kitchen and living room and to the exposition halls that have a wealth of audio-visual exhibits that describe many aspects of the writer’s life. It is a cold and snowy winter day and the school children are gone, as are a few Russian and European visitors. I find myself again by those windows, just admiring the view or maybe just seeking some kind of inspiration. 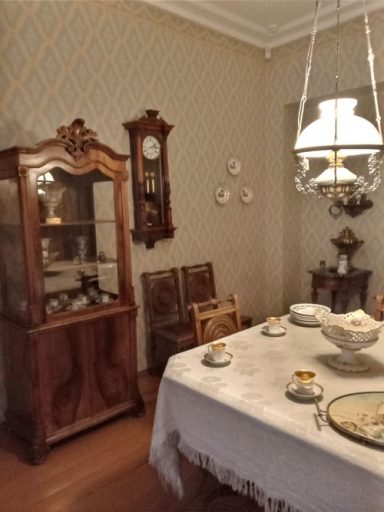 The museum’s gift shop has many interesting articles including calendars with images of artist Boris Kostygov’s sketches titled Dostoyevsky’s Petersburg. I cannot resist the temptation of buying The Brothers Karamazov in the original Russian. I had read the English translation of the book for the first time in 2002 when I did not know Russian. It was the first step in a journey to discover the mysterious Russian soul. The book was dedicated to the love of Dostoyevsky’s life, Anna.

While walking down the steps to the cloakroom and main entrance, I get yet another chilling feeling. It was the thought of Alexander II’s secret police running up these very stairs on January 25, 1881, to go the flat of one of Dostoyevsky’s neighbours who were believed to be members of a terrorist organisation that would assassinate the Tsar.

The day after the police raid Dostoyevsky suffered a pulmonary haemorrhage. The official story is that the writer banged his head against the wall while searching for a dropped penholder. The following day the writer would suffer a pulmonary haemorrhage. He would die shortly after a third haemorrhage. Conspiracy theories surrounding his death popped up almost immediately. Some believe that the writer was part of the group that wanted to assassinate Tsar Alexander II, and that the police killed him. This is by no means, a popular belief.

As I walk out of the museum and on to the nearby metro station named after Dostoyevsky I hear the bells from the Our Mother of God of Vladimir Church once again. If Dostoyevsky lived in contemporary St. Petersburg he would seek out characters in the metro, buses and trams of the city. Back in the 19th century, the great writer would not have even imagined the events of the next 140 years that have scarred and traumatised Russia. However Russia still stands strong and St. Petersburg’s society still feels in many ways like how Dostoyevsky described it in some of his great books.