Political inclination is needed to find solutions to the slowdown 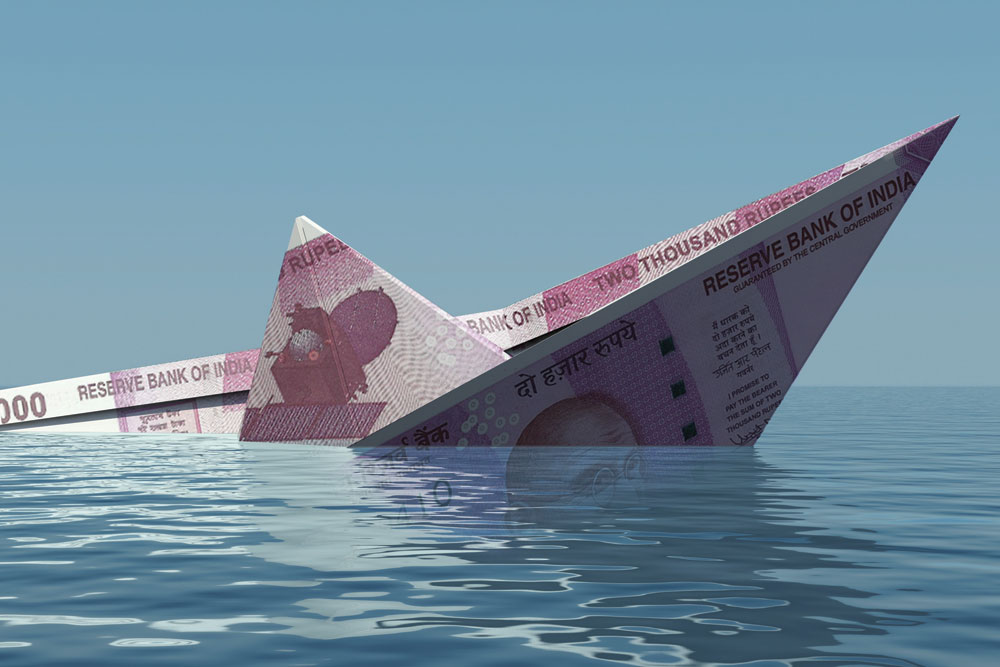 
By all accounts, the Indian economy is in deep trouble with the rate of its growth having almost halved from 8 to 4 per cent or thereabouts. So everyone is asking what should be done to revive growth. In other words, an agenda for 2020.

One thing needs to be explained at the very outset. The slowdown is largely in manufacturing, which comprises 15 per cent of GDP, which is about the same as agriculture where the low incomes are because of depressed prices owing to good crops.

So even if manufacturing output doubles, its impact on the overall rate of growth will still depend on what happens in agriculture and services—as well as the informal sector, which is that part of the economy about which there is no data, and which constitutes perhaps as much as 60 per cent of the economy. But that is another story altogether.

Meanwhile, before offering suggestions about what to do in 2020, some basic economics is called for because, despite all its achievements so far, the BJP has avoided engaging with it. In a large measure, it is this that has led to our current predicament. There’s nothing foreign or Indian about these economic facts. They are universally and inter-temporally valid.

All economies comprise three markets: for goods and services, for money and for labour. The main policy question for 2020 is the extent to which the Government can restore normalcy in the functioning of these three markets.

The key lies in balancing the three markets. This is not hard when the economy is booming or, indeed, even just merely doing well. Then only minor corrections are required.

However, when some or all of the three sectors are doing badly, as is the case now, the challenge before governments becomes impossibly hard. This is what will be crucial in 2020 because then they have to choose the sector in which to intervene first in order to restore normalcy, and to what extent.

This intervention, by the way, can be of two types: deep structural reform, which is politically costly or merely throwing money at the problem, which is politically cheap. This is done by propping up the market with taxpayers’ money. Luckily, the Government is so short of funds that the latter option is automatically limited. Therefore, it has no option but to undertake deep structural reform.

That’s why the forthcoming Budget is possibly the most important since 1991. Just as that one addressed structural issues, this one too has to do it. It will be judged solely on that basis.

To fully understand the nature of reform that is needed, it’s important to see how the balance between the three markets or sectors of the economy has shifted in favour of the financial sector. Since the late 1980s, most governments worldwide have sought to intervene in it first and if some money is left over, they’ve tackled the labour market only towards the end. I don’t want to go into the question of how this has worked for other countries. This is not the place for it.

But India, thanks to democracy, has been an exception. It has been intervening in the labour markets since 1947 by ensuring that wages/salaries in the formal economy remain impervious to market conditions. Not just this. The intervention has been so aggressive that labour costs in the formal sector are now double or even triple of what they are in well-run economies.

In Marxian terms, this means that it is labour that has extracted the surplus rather than having had it extracted from it. It has left those whom the Marxists call ‘capitalists’ unable to invest except by borrowing a significantly higher proportion of the total investment than what they do in other countries. This has also created the incentive for the capitalists to retrieve their investment out of the borrowed funds, rather than from future profits because the wage bill remains the same—or even increases slightly even when there is a demand slowdown.

For the public sector and the Government, the consequences have been equally negative because their wage bill increases in line with inflation. This has meant higher taxes to pay these high wage bills or more borrowing from captive banks. Both have depressed private savings, especially household savings. This in turn has put further downward pressure on investment.

If this is not bad enough, the financial sector, the other favourite of Indian governments, is also not as flexible as it should be. Interest rates refuse to come down. High wage costs in the public sector banks, which account for 75 per cent of the loans, ensure this.

This in turn means that the production sector is not only faced with a high wage bill, but also a high interest bill. It just can’t cope. This doesn’t happen in any other country that two out of the three sectors of the economy simply don’t adjust to changed market realities.

This the main reason why, in spite of the huge reduction in demand, the product market has not been able to offer market clearing discounts. In other words, it too has a downward rigidity problem! India is unique in this respect.

What Needs to be Done

The most important policy issue today is the extent to which the Government can stop spending taxpayers’ money on the labour and financial markets so that the real or production sector can offer lower prices to increase purchases by consumers. 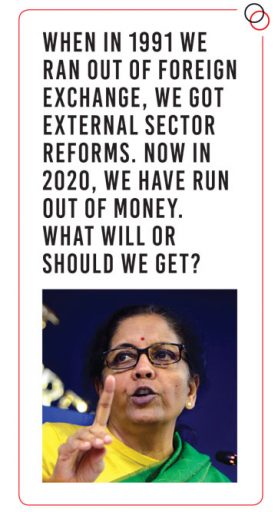 Consider, as an extreme but politically impractical solution, what would happen if the Government cut all wages and pensions by half and told the banks and NBFCs that it won’t pump money into them anymore. Instead, it tells the production sector that it will give them money to pay off their debts. This is because the time is long past when just lowering tax rates would do the trick.

The answer is simple: the economy will revive and start growing more quickly once again.

But we all know that for reasons of political correctness and competition, this is not going to happen to the extent needed, if at all. So what’s the next best alternative?

We therefore need something that resembles a loan waiver for farmers. This, in turn, requires the Government to savagely curtail other expenditure so that it can pay the banks what the real sector owes them.
In other words, the Government must recognise that all the three sectors need direct fund injection, not just two. It can’t help just two of them and hope that the economy will revive.

There’s nothing like being broke to focus minds. When in 1966 India ran out of food, we got the Green Revolution. When in 1991 we ran out of foreign exchange, we got external sector reforms. Now in 2020, we have run out of money. What will or should we get?

I think this year should be devoted to initiating a serious set of actions that will, over the next three years, leave welfare spending intact. All other spending on propping up unproductive public sector enterprises should be stopped. This is an absolute must now.

It’s worth recalling here that the external sector reforms started in1992 were rolled out over a decade. This is the approach that must be inaugurated in 2020 indicating a strong commitment to eliminating expenditure on the public sector so that the money saved can be spent on education and health. In other words, 2020 must witness a massive programme of disinvestment.

These will meet with political resistance. That’s why I have been saying for the last 25 years that the only government asset that is politically unproblematic is land. Unlike with the public sector enterprises, labour doesn’t come embedded in it. It is, therefore, easy to sell or lease.

My bureaucrat friends tell me that they have blocked the idea in the past because of corruption fears. But under Modi, that’s no longer a major worry. That is why the Government must set up the equivalent of a disinvestment commission to identify which of its land can be redeveloped, not just in Delhi but all over India.

Another thing that the Government needs to initiate is a state income tax. There is absolutely no reason why income should be taxed only by the Central Government. The correct approach is to fix a ceiling on how much can be extracted as income tax.

The maximum rate needs to be reduced to 35 per cent. The Centre should take a fixed 15 per cent, and the states between 5 and 20 per cent. This will give fixity to Central revenues and allow states’ independence. The overall result will not be very different from what it is now. And, of course, the agricultural income of those who are not farmers needs to be disallowed completely.

It is also important to reduce the pension bill. This can be done by reducing by half the pensions of those who have income from a residential or commercial property which is not in personal occupancy or use.
There are by any number of such things to be done to sort out the money problem. What is needed is political will, of which this Government seems to have plenty of.