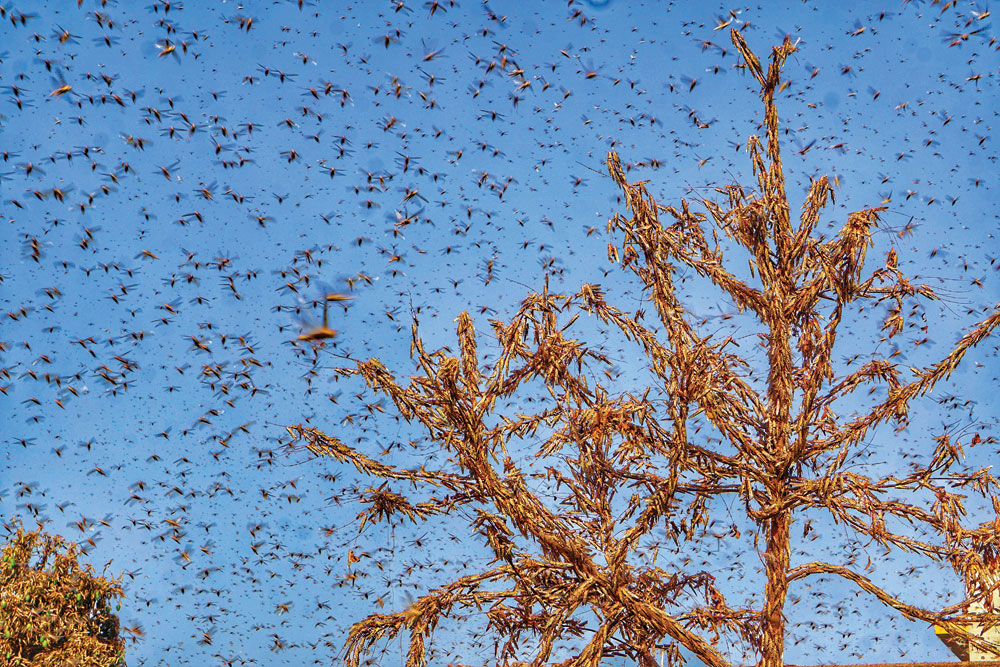 
A FEW DAYS into the first nationwide lockdown in March, Ranjeet Singh, a farmer in Sri Ganganagar, a border town in Rajasthan, woke up to his 300-odd WhatsApp groups buzzing with messages. They all carried the same warning: the locusts were coming, again. “We have been dealing with them off and on for eight months now. I had thought we would get some respite in December since winters are not favourable for tiddis [locusts] but they have been relentless,” Singh says. The swarms have been manageable so far, but Singh dreads the day he may have to live through what his grandfather once witnessed. “Day turns into night, the sun itself is blacked out. What could be more terrifying?”

By the time the locusts entered Jaipur on May 25th, the doomsday prophecies for 2020 were all but writing themselves. A year already marked by the worst pandemic in a century was now bringing a pestilence as old as time–a plague of locusts. The image of a locust swarm has been invoked in the Mahabharata and Illiad as an analogy for sheer numbers in the battlefield—and it is a battle that India is gearing up to fight over the next few months. An outbreak in 1863—when swathes of northern India were laid waste by invading swarms—was immortalised thus in an article in The New York Times: ‘When the grubs (the offpsring) were in their greatest force, it was a sight never to be forgotten. The ground within vision, and every tree, was covered, two and three inches thick, with them. On they came, crawling, leaping, one over the other, in countless millions.’ It wasn’t until much later that the world stopped treating locust swarms as regional problems to be handled by the local administration. In 1927, the British-Indian administration, having tried every trick in the book from tar screens to gun shots to defeat the swarms that had laid siege to parts of the country, realised the need for a central body for tackling the menace. The Central Locust Bureau was formed in 1930 and the Locust Warning Organisation (LWO), headquartered in Delhi with a substation in Karachi, came into being in 1939.

The corridors of the LWO office today in Faridabad are misleadingly empty. Inside, the office of KL Gurjar, the deputy director of the LWO, is a hive of activity. Between people walking in and out and the phone ringing off the hook since morning, Gurjar is swamped. There are locust swarms in Shivpuri, Madhya Pradesh, and urgent action is required for their containment. “We have been battling these swarms since 2019. This year they have arrived a month early, from Iran, Balochistan via Pakistan, due to favourable dry western winds,” he tells Open. The LWO comes under the Directorate of Plant Protection, Quarantine and Storage (PPQS) in the Ministry of Agriculture. From coordination with other countries and the Food and Agriculture Organization (FAO) to keep track of locust movements to directing action on the ground, it is the LWO that is the first and only line of administrative defence against the insects.

It has been over 25 years since India dealt with a major locust infestation, with a total of 172 swarms affecting 310,482 ha. There have been smaller localised swarms since but none after 2010. “I doubt many officers in the agriculture departments of state governments have ever seen a locust in their lifetime,” jokes Ajay Vir Jakhar, Chairman of the Bharat Krishak Samaj, an advocacy group for farmers’ rights. Jakhar has been cautioning about swarms since 2019. This is the second round of locust swarms invading the country, the first occurring between December 2019 and February of this year. “During that time we covered an area of 4,34,088 ha. This time around we have covered 55,000 ha across Rajasthan, Punjab, Haryana and Madhya Pradesh so far,” says Gurjar.


The problem is only beginning. Locusts have already caused damage to crops—the swarms are partial to cotton and moong bean—in parts of Rajasthan, but the real concern is the kharif crop, which will be planted in the coming weeks. This is the first time in years that locusts have ventured so deep inland. Riding the strong westerly winds from Cyclone Amphan, they have come at a time when the rabi crop has been harvested and the sowing is yet to begin; as a result, they have moved deeper inland in search of green vegetation. Crops in Uttar Pradesh, Rajasthan, Haryana, Madhya Pradesh and Chhattisgarh are now under threat of an attack from newer generations of locusts emerging with the monsoon. Under the right conditions, swarms are known to multiply twentyfold in just three months.

Riding the strong westerly winds from cyclone Amphan, locusts have come when the rabbi crop has been harvested and the sowing is yet to begin; so, they have moved deeper inland in search of green vegetation

An FAO forecast dated May 27th warns of the arrival of ‘successive waves of invasion’ until July, extending all the way up to Bihar. Some of these swarms, the FAO says, may be headed to the India-Pakistan border, all the way from East Africa where the situation ‘remains extremely alarming’. In January, the FAO had issued a warning that the swarms could cause an unprecedented threat to food security in the Horn of Africa. Waves of locusts have since hit Ethiopia, Kenya and Somalia, razing large tracts of vegetation. It is estimated that the locust attacks will impact the food security of 25 million people in East Africa in the coming months. There may not be a food security concern for India but states vulnerable to the attacks must gear up for individual losses to farmers.

Until last week, Bharat Singh, 28, a farmer from Ranayara in Madhya Pradesh’s Mandsaur district, did not know what a locust was. Riding home on his motorcycle, he saw a swarm descend and was stupefied for a minute. “My entire field of vision turned white. My father later told me what they were.” By next morning, Singh had found out, firsthand, the destructive potential of a locust invasion. Every plant and tree in his village, where the swarm had settled in for the night, had been destroyed. “We are very lucky that there is no crop right now. In the monsoon we will be planting soyabean and corn. That is when we will have to start worrying,” he says.

The first order of business when one spots a swarm is to alert the control room of the Locust Circle Office, the local branch of the LWO, so it can dispatch teams to spray organophosphates to clear swarms that have settled over fields. For his part, what a farmer can do to keep a swarm moving is to use traditional methods like beating drums or plates and starting fires. “I have dispensed with the silencers on my tractors. Villages have to come together to fend off storms and there are just a few tactics, including noise and smoke, that work. The only thing certain about a locust swarm is that a farmer will suffer losses,” says Ranjeet Singh.

From Africa to Iran, Yemen and Saudi Arabia, over 80 countries are grappling with resurgent locust swarms linked to a warming phenomenon in the Indian Ocean called the dipole. When the western part of the ocean becomes hotter than the eastern part, referred to as a positive dipole, it leads to extraordinary amounts of rainfall. Last year’s extended monsoon in India was a direct result of that. The same phenomenon was observed in West Asia and heavy moisture in the air contributed directly to the formation of the swarms. Favourable winds further contributed to this phenomenon.

IN PAKISTAN, where locusts have been declared a national emergency, pesticides are being sprayed aerially to control the swarms. As of today, India is using drones and ultra-low-volume fogging machine-mounted vehicles for spraying. The LWO, which has 12 circle offices (10 in Rajasthan and two in Gujarat), has pressed fire departments, too, into action. “Locust swarms are not uncommon, but we haven’t seen them on this scale in over 20 years now,” says Jakhar. The situation could have been handled better, he says. “These swarms should have been controlled in Pakistan.” India is a member of the South West Asia Countries commission of the FAO for controlling locusts, along with Afghanistan, Iran and Pakistan. With administrative attention diverted towards fighting the pandemic, the flow of information on locust movements seems to have suffered. India, the last country to be hit by the swarms, should have been better prepared.
The LWO argues, however, that there is nothing that can be done about a swarm until it actually arrives. After sundown, a swarm will settle, and once it does, there is no removing it, save killing it by pesticide. Swarms, which can fly more than 130 km per day, are anywhere between one sq km and several hundred square km, the total number of insects ranging from 40 million to 80 million. According to the FAO, even a small part ‘of an average swarm’ can eat the same amount of food in one day as 10 elephants. “When this settles into a field, it will eat everything in sight. Nothing is left. Its reputation as a harbinger of doom is not based on legend alone,” says Gurjar.

“We are stocking up on pesticides, coordinating with farmers and state agricultural departments. Right now the swarms are not capable of much damage but everyone is worried about what the monsoons will bring,” says Sanjay Arya, Joint Director, PPQS. Arya is on the ground in Jodhpur district supervising swarm management and control. Pesticides are usually sprayed on a settled locust swarm in the early hours of the morning, when there is better visibility, but even then, it is possible that 25 per cent of the swarm will survive, Arya says. “We then follow this swarm on our vehicles.”

The use of technology, exchange of information between countries and newer methods of spraying should help India contain the problem to a large extent. But in the process, there will be farmers who will lose their crops, Jakhar points out. For India, 2020 is not the year of the apocalypse but the year when the chickens are coming home to roost. Face to face with the consequences of environmentally unsustainable practices over the past few decades, and in the grip of pandemics, cyclones and locusts, India, and the rest of the world, will have to address the big picture.