The Evils of Chatter

Bois Locker Room shows us how terrifying the world of teenagers can be, and how as a society we have let them down 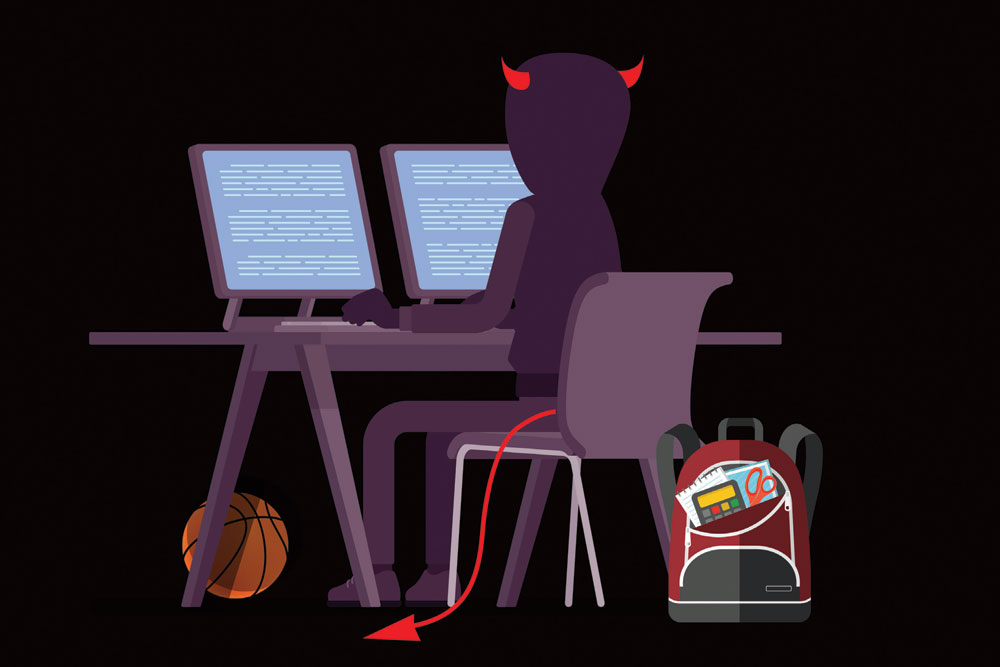 
HOW DID WE get here? How did school students reach a stage where they saw each other, not as classmates, let alone as friends, but as sexual objects onto whom heinous acts might be perpetrated? When did boys start thinking that it was okay to discuss the rape of a girl with peers? When did words which cannot be printed in a mainstream magazine become the parlance of high school chats? Have teenagers always been this cruel? And now is it just that the internet is amplifying their innate proclivities? How can we be better as parents and teachers and peers to ensure that our children feel some modicum of safety? How do we teach respect and empathy to students?

These are just some of the questions that many are grappling with as the ‘Bois Locker Room’ develops in front of our eyes. The chats reached social media after a girl, who was accidentally added to the Bois Locker Room Instagram group, took screenshots of them and shared them with classmates, and on social media on May 4th. On May 5th, the Delhi Police Cyber Cell lodged an FIR—following a complaint by the administration of a south Delhi school—about a private Instagram group, where teenage boys rated girls’ body parts, commented and shared their photos. Police also apprehended a 15-year-old boy and questioned him. On May 6th, an 18-year-old boy was identified as the administrator of the group. While the initial reports declared that the group had 100 members, by May 6th it came to be known that it had around 20 members and two had just finished school. The police have invoked sections of the InformationTechnology Act and the Indian Penal Code dealing with the distribution of pornographic content and making objectionable remarks about women against the apprehended boys.

On May 5th, a 17-year-old boy allegedly committed suicide by jumping off the 11th floor of his apartment building in Gurgaon. According to initial investigations, police are probing social media posts by a girl who had raised allegations of being molested two years ago by him. While on social media his suicide is being connected to the Instagram group Bois Locker Room and the subsequent state action that was taken, there is no evidence of that yet. What the suicide does however highlight once again is that words on social media carry immense weight. Posts have repercussions. Comments can and do ruin lives just as accusations can.

Today’s generation has it far worse than we did because social media magnifies locker room chatter manifold. The locker room has always been a segregated space, one where boys and girls did not mingle, and where a certain kind of physicality was the norm. The internet has taken the locker rooms of gymnasiums and high schools and opened it out to a far wider membership.

What was once passed on chits and was sniggered into neighbouring ears is now available for hundreds, even thousands, to see and comment on. The internet in many ways has the same power as the mob. It enables, even encourages, a behaviour an individual on his own would not perpetuate. It is a peer pressure that stretches beyond the playground and nudges boys to say and write comments that they might not otherwise express.

I come across a post by a concerned mother of a teenage boy. Gurpreet Kaur Wasi writes on Facebook that she knows two of the boys in the Bois Locker Room and one of them is even her FB friend. Her post reads, ‘Both boys have impeccable manners, and a very fetching charm. They have progressive and supportive families. I would not, in my worst nightmare imagine why they were part of this debauchery. Even as mute spectators, you are complicit. As a generation of parents, where have we gone wrong?’
Reading her post leaves one deeply unsettled. It is convenient to believe that boys who can morph photographs and discuss carrying out sexual assault are boys who are outliers, those who we do not know, those we could not possibly know. While toxic masculinity is the go-to term to describe male behaviour and entitlement, it is here that one sees its might. The 15-year-olds who can discuss sexual assault online do that in part because they feel that is what is required of them. It is a performance, where they must play the part of a ‘macho man’. To be seen as ‘macho’ by one’s friends and peers is to humiliate others, especially girls. With their friend’s parents they know how to be gracious and charming, but thrown into all-boy space they feel the right way to be is to degrade women.


Today’s urban teens belong to a demographic far more exposed to the workings of sex. But educators and parents have not caught up. We have not given them the tools to navigate through essential issues of consent, trust and empathy.

Today’s urban teens belong to a demographic far more exposed to the workings of sex. But educators and parents have not caught up with them. We have not given them the tools to navigate through essential issues of consent, trust and empathy. Bois Locker Room shows us not only how terrifying the world of teenagers can be, but also how as a society we’ve let them down.

As Wasi tells me, “As a mother of a 14-year-old boy I shudder to think what would happen if my son had been part of this. I think, we have become immune to stuff around us—our jokes, movies, news—everything has created blind sports. Our children are a product of this culture.”

She calls the current moment a “pre-teen MeToo” where girls are coming out and saying what has happened to them. She says the outing of the Bois Locker Room prompted the girl student to speak out about the allegation against the 17-year-old boy.
At times, this can seem more like a cycle of violence than only toxic masculinity. Girls too can be guilty of reducing boys to the sum of their parts. While it is important to note that girls too can use sexist and demeaning language, the fact remains that the online (and real) world is a deeply unequal space, one where women are incessantly trolled and targeted. The slander against women comes to the fore in the comments on Twitter. Many men online do not know how to deal with an opposing point of view other than by threatening women with sexual violence.

There will be those who wish to be dismissive and say these are just words and not acts. But it is a sexist vocabulary that creates a sexist society. Growing up, we’ve all experienced the perils of classroom chatter, to different degrees. Some of us were fortunate to have been more sheltered than others. But we all know of that one girl who reached puberty early, who was made aware of it, and then never allowed to forget it. Or we know that one boy who could never grow a moustache and how that became the only story around him. And we know the scars that these burn into a person. The slurs of childhood (sadly) determine how we view ourselves and how we view the world. The WhatsApp jokes that Unclejis pass around, the casual watercooler talk that hinges on the appearance of a person, the nudge-nudge-wink-wink behaviour of offices, all this creates a society devoid of compassion. And it is the young who are paying the greatest price.