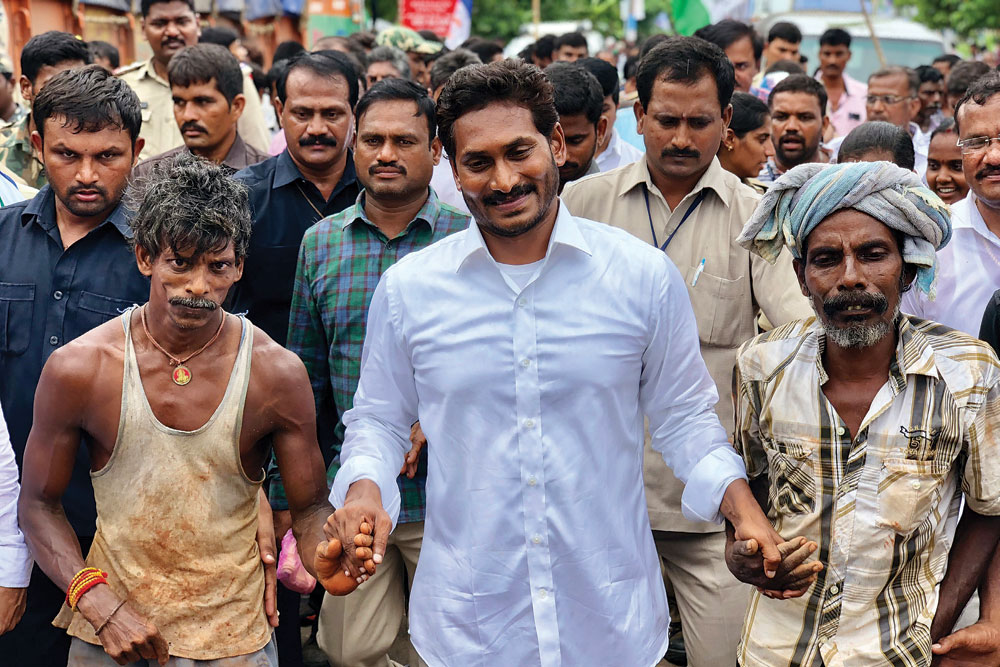 
On May 30th, as Andhra Pradesh Chief Minister YS Jagan Mohan Reddy marked a year in office by launching 10,641 Rythu Bharosa Kendras for the disbursement of direct cash transfers to farmers, his own government was grappling with a bumper crop of unfavourable judgments in the High Court. The mood at the Secretariat in Amaravati was subdued, and not just on account of the coronavirus or the prolonged wait to move base to the north-coastal city of Visakhapatnam. With the courts reversing many of Jagan Mohan Reddy’s allegedly rash decisions in the past week, the testy eloquence of the challenger who had set out to dethrone the Telugu Desam Party in the 2019 Assembly polls was mellowing to a defensive counterattack. Notwithstanding the YSR Congress Party’s (YSRCP) landslide victory last year, winning 151 seats in a 175-strong Assembly and 22 of the 25 Lok Sabha seats from the state, and Rs 40,627 crore disbursed in benefits to 35.8 million beneficiaries since, Reddy’s popularity seemed to have been overshadowed by the controversies that had marked his term from the start. From the stalling of flagship infrastructure projects sanctioned by the previous government and the decision to retain Amaravati as a lesser capital among three in a decentralised state, to reserving 75 per cent jobs for locals in private industrial units, he had initiated a series of radical turns in policy, hoping to fulfil a grand synthesising ambition to recover the past from the more recent past. The nostalgic undertow of the late YS Rajasekhara Reddy’s programmes, having shaped the YSRCP government’s policies and helped it break the intractable caste allegiances of Andhra Pradesh, has, however, proved insufficient in guiding it through a period of unprecedented challenges. In fact, legal counsel vetted by YSR himself has not been able to sufficiently defend the government’s most controversial decisions in court.

According to sources in government, Advocate General Sriram Subrahmanyam, who was once close to YSR and served as special government pleader under the then AG, DV Sitarama Murthy, is on his way out, biding his time until his appointment as a High Court judge. “The government has lost over 60 cases in the High Court, and this could lead to heads rolling in the legal team,” says a senior advocate close to the matter. “I am not proud to admit that I studied with and under some of them. But to blame Sriram, who is a thorough professional, or the judges who ruled against the government, is just silly and baseless.” Indeed, it wasn’t one judge but three different benches that had passed three separate orders on May 22nd that together dealt a crushing blow to the government. The High Court had ordered a CBI inquiry into the suspension and alleged persecution of Dr K Sudhakar, a doctor from Visakhapatnam who had accused the state government of not providing all medical professionals with PPEs. It had also set aside a government order to paint public buildings in party colours and asked that senior IPS officer AB Venkateswara Rao, who had been suspended on suspicion of leaking critical intelligence information to an Israeli defence manufacturer, be reinstated. This, however, was only the tip of the PIL iceberg that the government had collided head-on with.

In mid-April, the same court had set aside an order to switch the medium of instruction in government schools to English this academic year onwards, effectively quashing a long-cherished dream of Reddy’s. “There are over 44,000 government schools in the state where the medium of instruction is Telugu. It is an ambitious and well thought out move by the government to offer English education to those who can’t afford to send their children to private schools. We have trained teachers in English medium instruction, and we will continue to offer Telugu as a medium in select schools,” says Adimalapu Suresh, the minister for education, defending the policy. The Chief Minister, quoting from a survey of 4 million parents where 96 per cent opted for English medium education, has said that the government will appeal the decision in the Supreme Court.

Responding to the tidal wave of unfavourable judgments against the government, YSRCP cadres and leaders have, in their misplaced anger, lashed out at the judiciary on social media, resulting in the High Court serving notices to 93 people for attributing ‘motives, caste bias and corruption allegations’ to judges and making abusive comments against them. The accused include YSRCP leaders Nandigam Suresh, the Bapatla MP, who made a speech alleging that TDP President and former Chief Minister N Chandrababu Naidu was “managing” the High Court, Anakapalli MLA Amarnath Gudivada and former Chirala MLA Amanchi Krishna Mohan. “It is hard to control tempers at a time like this,” says a minister in Jagan Mohan Reddy’s cabinet. “There is a belief that Chandrababu Naidu has cultivated judges just as he has cultivated the media. But we cannot be saying it out in the open. There are enough cases to deal with as it is,” he says. “If there is one thing you have to credit the TDP for, it is that despite being nearly wiped out, they don’t sit quiet even for a day,” he adds.

Reddy’s troubles are far from over. On May 29th, the Andhra Pradesh High Court struck down an ordinance by the government to remove the state election commissioner (SEC), Nimmagadda Ramesh Kumar, by amending the AP Panchayat Raj Act to reduce the term of the SEC from five to three years. The order effectively reinstates Kumar. Jagan Mohan Reddy had personally accused him of being anti-YSRCP after he had issued a notification on March 15th, postponing, on account of Covid-19, the local body elections scheduled to be held in the last week of the month. The state government, which appointed retired judge V Kanagaraj, will file a special leave petition in the Supreme Court, Sriram said in a press conference following the High Court verdict.

The YSRCP government also faces a backlash against its move to register a case against a 66-year-old woman for allegedly posting objectionable comments on social media on the LG Polymers gas leak in Visakhapatnam and the government’s response to it. A string of bad decisions seems to have momentarily distorted the optics in favour of the opposition; as he learns to wield power within the bounds of democracy, it remains to be seen if Reddy can emerge stronger and calmer.