From the Valley to Vemula, it has been a distortion of dissent on the Left side of protest 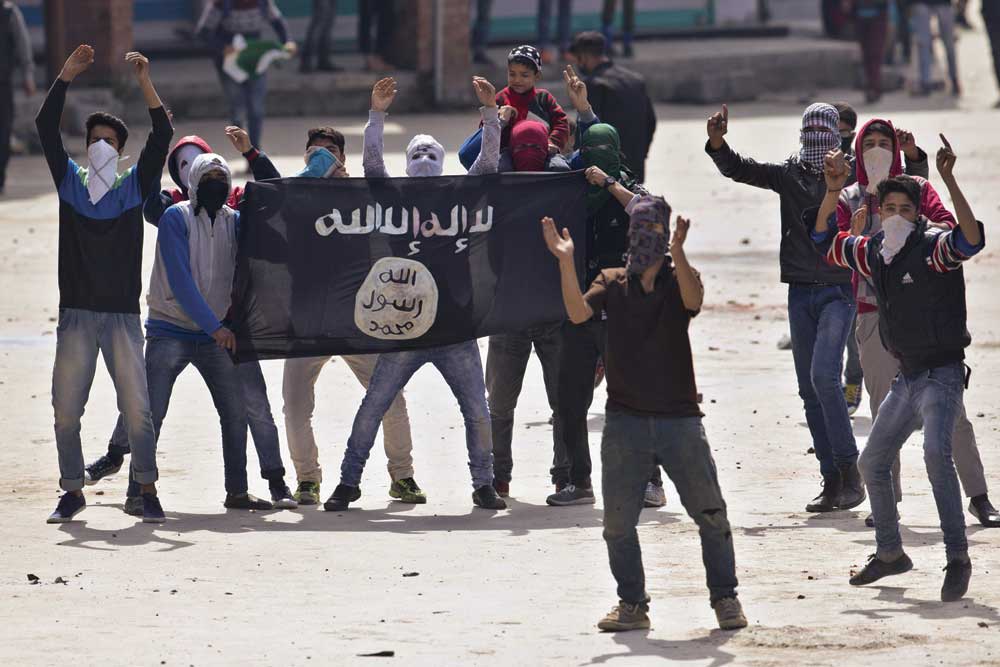 HISTORY HATES TO be taken for granted. It conducts ambushes on speculative philosophers who refuse to learn lessons and insist on treating it as an old fogey. The ascension of a certain man who likes to make faces from Trump Towers to the White House is perhaps the most powerful message History has delivered after World War II. By the time the curtain is pulled on 2016, the dust in Aleppo would have settled enough for the Left-liberal cabal to see the gash of its paw on its cheek.

In India as well, the same bunch have replaced moral clarity with ideological kitsch, which, as Milan Kundera wrote, is the absolute denial of shit. The vocabulary of protest in India is a hollow that the Left keeps carving deeper with the pocketknife of its rhetoric. In The Human Animal, the American anthropologist Weston La Barre mentions the existence of a curious amphibian called the axolotl which never goes through the normal metamorphosis, and instead remains in a ‘prolonged and sometimes even permanent stage of immaturity’. One often gets a glimpse of this neoteny in the feverish eyes of a nameless comrade in Mirzapur, who, each time you have met him in the last decade, has shaken your hand more emphatically than previously and then whispered that revolution will come by next week.

It is egged on by this utopic infantilism that things in Kashmir have come to a pass where a theo-fascist movement is dubbed as a ‘freedom struggle’ and the narrative is confined to unmarked graves and rum-eyed Indian soldiers. It is not that information on how Islamist extremism in Kashmir has become starker in Kashmir in the last few years is unavailable; it is just that Left-liberals even fail to imagine that scenario. It is this failure of imagination that sends comrades from the mainstream Left to the doorstep of a radical Islamist who has offered funeral prayers in absentia for Osama bin Laden.

The situation in Kashmir deteriorated this year to such an extent that every year other than 1990, when militancy began, pales in comparison. The actors of 1990, fattened with money from both India and Pakistan, turned into caricatures long ago. Most of them were the lumpen who, much to the chagrin of their Marxist patrons, quickly lost all interest in ‘revolutionary advancement’. Spotted more often in Khan Market than in Kashmir, they learnt to speak in phatic terms, keeping their handlers on both sides of the border happy.

From the post 9/11-vantage point, the writing on the wall has been clear in the last several years. In the globalised Jihad scenario, the poison ivy of radical Islam found in Kashmir an ideal nursery. The rage boys who pelted stones were now holding flags of the Islamic State. Their patron caliph was Syed Ali Shah Geelani, whom the Left-liberals of Delhi invited to speak at public meetings against Operation Green Hunt in Bastar. Nobody asked or had issues with how someone like Geelani could be made the face of resistance, a man who wants azaadi bara-e Islam (‘freedom for Islam’) for Kashmir.

While radicalism was replacing whatever little was left of the syncretic practices of Islam in Kashmir, the faux battle for Kashmir’s ‘wounded dignity’ began this year at Jawaharlal Nehru University on the death anniversary of the Parliament attack convict, Afzal Guru. As far as the spirit of a university goes, it would have been fine if the event were restricted to a debate on whether Guru received a fair deal or not from the Indian state. Even a statistical regression on barbed wire versus intifada levels would have been okay. But it turned out to be a conflagration of sorts. Cellphone cameras captured men with Kashmiri accents shouting slogans seeking ‘Burhan waali azaadi’ and the breaking of India into pieces.

No Left-liberal asked this question of the events at JNU: when did asking for India’s destruction become a part of the revolutionary praxis? How will India’s coming apart bode well for the poor and marginalised for whom the comrades claim to be fighting for? And why would anyone seek a model of freedom espoused by the commander of a terrorist organisation?

Burhan Wani’s father knew it, but in their burbling absolutism, the poster makers of JNU forgot that the average lifespan of a terrorist in Kashmir valley is six to seven years. Before Kanhaiya Kumar could sign a book deal to become a tax payer, Burhan Wani had been killed in an encounter with security forces. While JNU students submitted their dissertations, Kashmir fell into a gorge of death and destruction.

As the political communication from New Delhi revolved around insaaniyat and jamhooriyat without defining their perimeter, security forces faced unprecedented challenges at the hands of civilians who threw stones on their backs while they remained engaged in fierce gun battles with terrorists holed up in private houses and government buildings. It was in many ways a collapse where the administration could not function at all and groups of youth held the Valley hostage for months.

The separatist machinery, of course, came together because they saw in it an opportunity they had not had for 25 years, despite many attempts. But with the new wave of radicalism also came a rejection of old systems. Though both New Delhi and the separatists felt (or claimed) they were in control, the chaos spawned a new breed of radicals who seemed to be following the Islamic State model. Suddenly, one school building after another went up in flames. Idioms of hatred against minority communities like Shias and Pandits became more pronounced. Violence spread to areas that had not seen militancy since the mid 90s. The situation in south Kashmir turned particularly grave.

Geelani’s stand on Pakistan and his views on secularism and democracy are axioms made clear through his public addresses. But in its clamour of azaadi, the Left simply chose to ignore the threats of radical Islam. The Left behaved how Donald Rumsfeld did after the first Abu Ghraib pictures surfaced. “What happened at Abu Ghraib was not right,” he said, “but it is not the same thing as cutting off someone’s head in front of a video camera.” The philosopher Susan Neiman analyses Rumsfeld’s stance in Moral Clarity: a Guide for Grown-up Idealists: ‘But only if you think that evil has an essence can you draw the conclusion Rumsfeld wants us to draw—namely, that one of these actions is evil, and the other is simply too bad.’ For the Left, any digression of the state was evil, but what jihadis did in the name of Allah was simply too bad.

It is this attempt to define evil according to their convenience that has led to the failure of the Left and forced a significant mass of people to join the chorus of nationalism. The American political theorist Michael Walzer describes this failure of the Left to reclaim moral clarity thus: ‘No one on the Left has succeeded in telling a story that brings together the different values to which we are committed and connects them to some general picture of what the modern world is like and what our country should be like. The Right, by contrast, has a general picture.’

That general picture may look grim, but many would rather stand up in a cinema hall when India’s National Anthem is played than entertain thoughts of ‘Bharat tere tukde honge, inshallah, inshallah ’ (India, you will break into pieces, God willing, God willing).

IN JANUARY THIS year, the Left’s failure of imagination contributed to the tragic death of a young Dalit scholar who wanted to be a writer, ‘a writer of science, like Carl Sagan’, in his own words. Once he died, the Left turned Rohith Vemula’s death into a totem pole to rally against Hindutva politics. That would have been justifiable if in his lifetime Vemula had been shown a way out of the social order that the Left itself has tightly held on to. Early on at the university he went to, Vemula had realised that the Left had not been able to break the shackles of caste. In a scathing piece in Hindustan Times a few days after his death, Vemula’s friend Jashwanth Jessie wrote: ‘[Rohith’s] disillusionment with the communists happened when he discovered that the boys and girls who had given up faith in god could not bring themselves up to abandon their faith in the caste system.’

Jessie also pointed at the Left’s failure to imagine the reality of the predicament of someone like Vemula. ‘[The Indian Left’s leadership] have no idea or experience of caste oppression. This upper-caste domination of the Left has certainly undermined the Indian Left politics as a whole,’ Jessie wrote.

Vemula might as well have been referring to his experience with the Left when he wrote in his suicide note: ‘The value of a man was reduced to his immediate identity and nearest possibility. To a vote. To a thing. Never was a man treated as a mind. As a glorious thing made up of stardust. In every field, in studies, in streets, in politics, and in dying and living.’

In Una, a town in Gir Somnath district of Gujarat, though, Jignesh Mewani, who has emerged as the face of Dalit assertion, understands the perils of human reduction to one’s immediate identity. In interviews, he has pointed at the futility of sheer anti-casteist sloganeering and made clear that as far as his protest goes, Dalits will be in control and that the Left is welcome to join as an ally.

At the beginning of 2017, the first indication of the effect that Vemula’s suicide and the Una agitation has had on the Dalit psyche will be clear in the Uttar Pradesh Assembly elections. Will the Left draw any lessons from it? That looks unlikely, given its penchant for rejecting uncomfortable evidence.

Susan Neiman puts it like this: ‘The Left has little to provide but the grim and condescending suggestion that most people have always been duped.’ In the absence of a viable Venn diagram of caste and class on its drawing board, the Left can only succumb to the silly symbolism of celebrating Mahishasur.

For the Left, as 2016 has indicated, the owl of Minerva, to paraphrase Hegel, may not even be ready to spread its wings with the falling of dusk.