Tamil Nadu: What the Stars Foretell 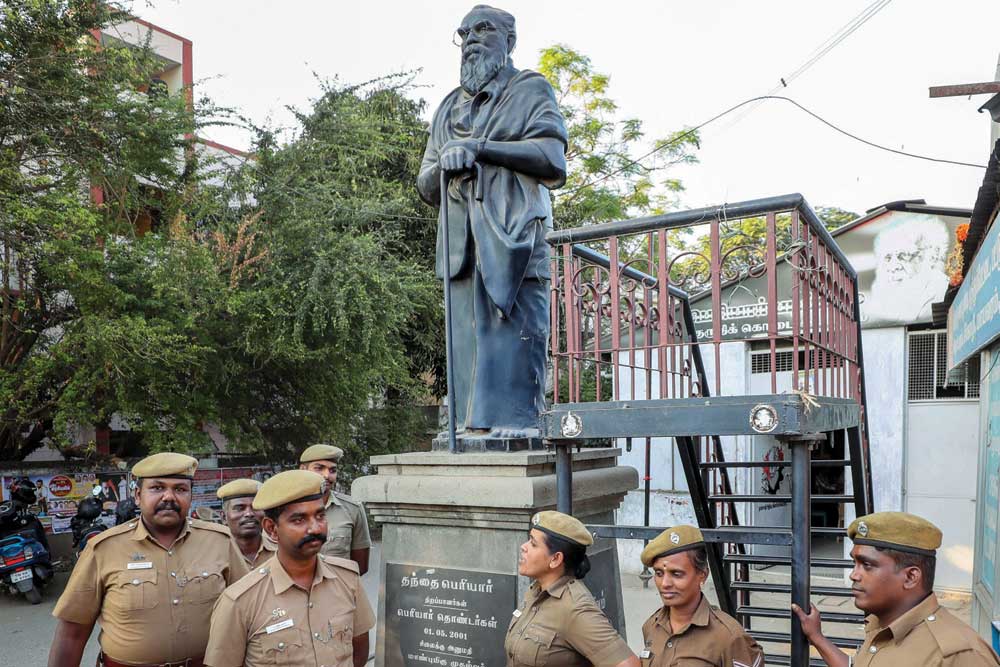 DAYS BEFORE 35,000 farmers marched to Mumbai to the music of revolution, the disaffected politicians and activists of Chennai had emerged blinking into its sweltering streets in several separate efforts to string along popular passions. To an outsider, Chennai might have looked embattled. On one day, there were at least four groups protesting in and around Valluvar Kottam, a memorial to the Tamil poet and a popular venue for pamphleteering. The Left and the Dalit parties occupied a public square where they practised their most guttural and censorious lines. The DMK sent a busload of boisterous men and women who, instead of revising their old scripts about governmental inadequacy, smiled at policemen and courted arrest. The previous day, a group of Periyarists, ideological pitchforks at the ready, had resorted to a gut- level show of disparagement by severing the sacred threads of over a dozen Brahmins, and now a tightknit unit of men in white veshtis, prominent caste marks on their foreheads, were gathered near Sankara Nethralaya to raise slogans against being victimised and sidelined in modern-day Tamil society. Unlike the farmers’ march, none of these events commanded spectatorship. They were like little confessionals where power-starved politicians came periodically to sing full-throated songs of themselves. The provocation this time had come from H Raja, the BJP’s resident instigator of Tamils, who had hailed the toppling of a statue of Lenin in Tripura and hinted that Dravidian patron saint Periyar EV Ramasamy’s would be the next to fall. A Periyar statue was indeed vandalised in Tirupattur, and protests should have ‘rocked’ a state that owes its defining political ideology to the man. The scattered voices of Dravidian politics did unite for a fleeting moment around Periyar, forcing the BJP to make Raja apologise for his callousness, but beneath the outrage were undercurrents of opportunism at the collapse of the treacherously simple Tamil Nadu model of anti-incumbency.

“It is only when an issue like this comes up that the smaller parties feel relevant,” says C Manju, a woman constable on duty in a lane in Royapettah where a heavily garlanded statue of Periyar seems to duck under a string of DMK streamers in red and black. “We are stuck guarding statues all day long, while politicians turn this into another vote-churning opportunity.” The statue is attached to a Periyar reading hall—a tiny room with a few shelves that doubles as an office for the Dravidar Vidudhalai Kazhagam, the outfit that claimed responsibility for the attack on Brahmins in response to anti-Periyar sentiments kindled by the BJP. A police jeep is on standby outside. Periyar, a reformer whose Self-Respect Movement was aimed at asserting the identity and dignity of Tamils, is an institution in the state. While the average Tamil does not follow Periyar in everyday life, the ideals of social equality, rationalism and linguistic pride that he instilled in the 1920s and 30s continue to shape the politics of Tamil Nadu. Any effort to besmirch his legacy is obviously expected to backfire and can only be interpreted as a politician’s gaffe or mischief-mongering by a party without too much skin in the game—even though Tamil Nadu sends 39 MPs to the Lok Sabha. But what it has also done is expose the faultlines in present-day Tamil politics.

While the average Tamil does not follow Periyar in everyday life, the ideas of social equality, rationalism and linguistic pride that he instilled in the 20s and 30s continue to shape the state’s politics

“Not only has the BJP shot itself in the foot by trying to demean Periyar, but the AIADMK’s silence is a self-goal. Dalits and marginalised farmers are unhappy with the AIADMK today,” says S Thirunavukkarasar, the Tamil Nadu Congress Committee president and a Dravidian historian. With the death of AIADMK supremo J Jayalalithaa, the party spun apart like a centrifuge, leaving MGR and Amma loyalists wary of all three factions. The Edappadi K Palaniswamy-led government, which is preparing for the budget session, is seen as a vassal of the Centre. Even as he battles a corruption case, TTV Dhinakaran, the man with the most money to splurge on buying votes, is about to launch a party from Madurai, a city that has witnessed several political initiations, the latest of them actor Kamal Haasan’s. As the intellectual gadfly turns serious politician, swapping out rhetoric for approachability and touring the state to build a base for his party, Makkal Needhi Maiam, there are fears that he may attract a small chunk of the anti-AIADMK vote, thereby hurting the DMK, which stands alone as the largest structured party in the state with a committed votebank.

“We are confident of winning under the leadership of Stalin. There is no other party that people can trust. We are the custodians of Dravidian politics and pride in Tamil Nadu,” says senior DMK leader Duraimurugan. “All this talk about a political vacuum is just gimmicks by newcomers.” The party has been on the offensive of late on issues like the timely constitution of a Cauvery Management Board in accordance with the Supreme Court order to ensure release of water to the state. The Board, yet to be formed, will remain a political flash point between the Centre and stakeholders at the state level until the General Election. Speculations of early polls in the state are premature, and the DMK, fresh off its acquittal in the 2G spectrum scam case, may yet have time to make amends for the mistakes of 2006-2011. Those looking for signs of a recovery post-Jayalalithaa were, however, taken aback by the party’s dismal show in the crucial RK Nagar bypoll, where its candidate Maruthu Ganesh came in third, losing his deposit. MK Azhagiri’s demurrals from his southern bastion and Stalin’s son Udhayanidhi’s impending political debut could add to the DMK’s worries.

Rajinikanth’s first major public engagement was well thought out. Calling out the maladjusted politics of the Dravidian parties sans their cult leaders, he said he could fill the void that gnawed away at Tamil Nadu

Even as statues were being vandalised across India, a new golden figure rose smiling and tall on the Maduravoyal main road in west Chennai. Banners welcomed Superstar Padma Vibhushan Rajinikanth to the 30th anniversary event of the Dr MGR Educational and Research Institute, where he unveiled former Chief Minister MG Ramachandran’s likeness, staking claim to his mythologised legacy like many aspiring politicians before him—including ‘Captain’ Vijayakanth, whose ‘karuppu (black) MGR’ tag added to his popularity a decade ago. Rajinikanth’s first major public engagement since he announced his political intentions was well thought out. Calling out the maladjusted politics of the Dravidian parties sans their cult leaders, he said he could fill the gaping void that gnawed away at Tamil Nadu. “MGR was a revolutionary. Not in a thousand years can there be another MGR,” Rajini said, addressing over 5,000 students. “But I have the confidence that I can give the people’s government that MGR gave.” Whatever their stripes, Tamil politicians must necessarily borrow pages from the illustrious playbooks of CN Annadurai, MGR and K Kamaraj. As befits a star with legions of fans, Rajinikanth picked the showiest of the trinity to prop himself up on. “It was a well-crafted speech,” says a political observer. “By asking students to focus on their studies instead of joining politics, he was appealing to the middle-class, middle-aged parent. And by endorsing the utility of the English language for students, he was showing us that he was just radical enough to attract the youth vote,” says the commentator. “Kamal’s assurances to fisherman and farmers seem like doublespeak in comparison. He is a [member of the] elite and he cannot connect with them.”

The born-again stars, one on a Himalayan spiritual getaway and the other on a discovery of Tamil Nadu, hog the limelight now, but they may not get to play protagonists in the battle for a state that is looking for weighty three-dimensional leaders, not cutouts that could turn at the gust of a wind. Could Rajinikanth be the BJP’s wild card? Could Kamal Haasan’s campaign run out of steam—and funds? “Rajinikanth cannot associate with the BJP if he wants the Dalit vote, and his new films indicate that he does want them,” says Thirunavukkarasar. “Only time will tell how the two stars change the equilibrium here.”

“Rajinikanth hesitated before entering politics and admits to being pushed into it. I find it hard to trust him when he is just being an opportunist,” says Karthik Sankar, 28, a civil engineer. Hours before Rajinikanth unveiled the statue on March 5th, Sankar and a friend shared a plate of mutton curry and rice at a ‘military hotel’ a couple of kilometres away. “We joked that Tamil politics was getting spiced up, and we hadn’t even bitten into the chillies yet,” he says. “That’s what stars are for Tamils—spice that we can’t live without even if it is bad for us. Here, only Brahmins avoid spice, you know?”

Not one of the Brahmin men whose sacred threads were snipped turned up for the small protest organised by an outfit called the Rashtriya Sanatana Seva Sangam. Speaking to me over the phone, a priest from Triplicane whose top knot was chopped off, said he would rather not invite the wrath of “the gangsters” by talking about the incident. “We feel persecuted when we display or follow our culture. The wave of anti-Brahminism that swept Tamil Nadu during the initial years of the DMK is slowly returning,” says Ramasubramania Sastrigal, a priest from Porur. “Are you going to write about us, or do you not care, like the rest of the media, because Brahmins aren’t a vote bank?” he asks. “Jayalalithaa was the only one who cared about us.”

“We had to make a symbolic statement. Those who violated Periyar’s statue must have thought we would storm a temple and damage their idols. But we don’t want to take away someone’s heritage—a thread that symbolises caste supremacy, however, goes against everything that Periyar believed in. If our boys roam the streets without a shirt on, the police call us indecent, but if a Brahmin does it, they bow before him,” says activist K Sukumaran, 36, outside the DVK reading room in a narrow lane in Mylapore. His colleagues admit to participating in several attacks on Brahmins, including in 2014 and 2015, to keep aloft the flag of Periyar. Rajinikanth, he says, could emerge as a unifying factor for Hindus and for marginalised communities. “He has condemned the attack on Periyar’s legacy. And although a Hindu, he represents Tamil Nadu’s culture of bhakti, not madham (religion).”