Tamil Nadu: Vacancy for an Icon 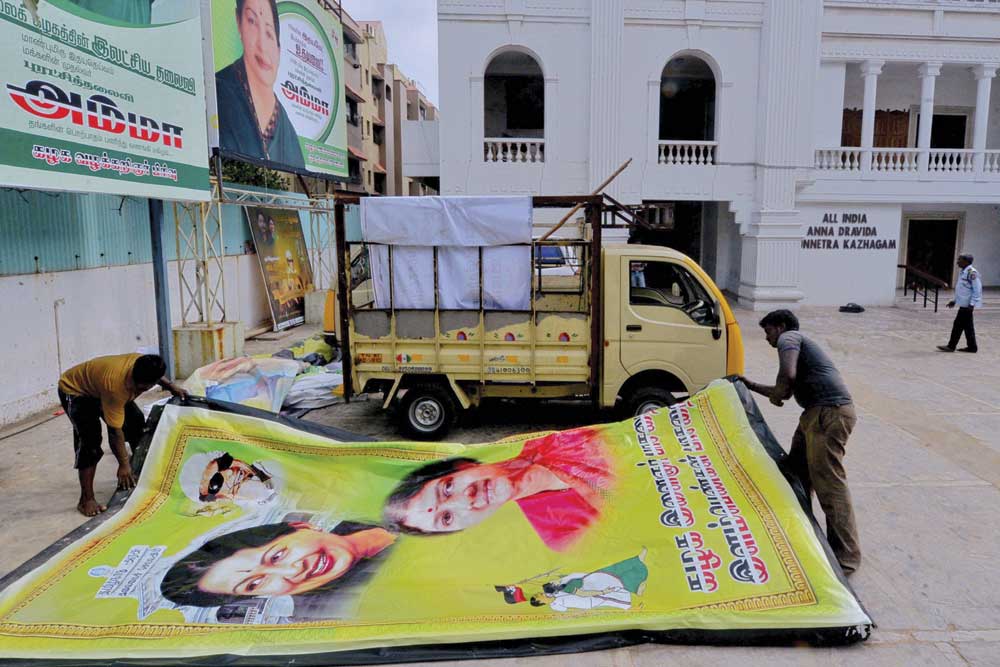 IN THE POLITICAL theatre of Tamil Nadu, J Jayalalithaa’s sinuous solo is a tough act to follow. An ensemble cast made up of stage hands has thus far kept the production going by turning it into a contest for the top spot. They have lurched through a series of heartbreaks and reconciliations, hurled election props at the audience, and effected magical transformations that have kept the whole thing from becoming puppet theatre at the hands of higher powers. But with VK Sasikala and her kin now in the dock, we can only roll our eyes and sigh at the absences that animate this incoherent performance, and perhaps revel momentarily in the thought that had DMK patriarch M Karunanidhi been well enough to walk, he would have made the stage his own.

Dravidian politicians, including the DMK’s new working president MK Stalin, can neither fill the shoes of their antecedents, nor break with a storied, scandal-ridden past as relentless interlopers from the north threaten to irrupt into their space. The cosy circuit of anti-incumbent politics in Tamil Nadu is about to come to an end. The storm-petrel sounded its cry loud and clear around midnight on April 25th, when TTV Dinakaran, appointed deputy general secretary of the AIADMK by Sasikala, was arrested in Delhi for allegedly attempting to bribe the Election Commission so he could retain the two-leaves symbol ahead of the crucial RK Nagar bypoll. The BJP is perceived to be the force behind the arrest. Filled with a sense of possibility post its win in Uttar Pradesh, it is plotting a route into Tamil Nadu, and while a long way from landfall, it needs a sure-footed partner to help mine resources here. That partner could be the AIADMK, which currently lends itself to manipulation, divided as it is over the newfound ambitions of senior party leaders. Like logs untouched by fire, they had not reckoned a political future for themselves when an imperious Jayalalithaa ran the show. But then, Panneerselvam, a former Amma foot soldier, shed his servile image and reinvented himself as a fighter, a Cassius Clay-turned-Muhammad Ali appealing to the popular imagination. The spark was enough to make the BJP throw its weight behind him, even if he only enjoys the support of a dozen-odd MLAs.

This is a throwback to the power struggle following AIADMK founder MG Ramachandran’s death in 1987, when the party splintered into two, with 97 MLAs backing the VN Janaki faction as against Jayalalithaa’s 33 MLAs. The Congress, which had 61 MLAs at the time, did a volte-face at the eleventh hour, siding with Jayalalithaa. Janaki won the vote in the Assembly, thanks to the then speaker PH Pandian’s summary disqualification of DMK MLAs and Jayalalithaa supporters (Pandian and his son Manoj are now with the Panneerselvam camp). The Janaki government lasted 23 days, after which President’s Rule was imposed. In the Assembly elections in 1989, the DMK was voted back to power, and Jayalalithaa, though she had won the party, lost her first Assembly election as AIADMK chief. “The AIADMK learned key lessons from the 1989 elections. They won’t repeat the mistake now. The government will last the term, with adjustments to accommodate both factions. The two sides will have to unite under the two-leaves symbol before the local body elections this year,” says S Thirunavukkarasu, the Tamil Nadu Congress Committee president and a Dravidian historian.

Although the majority faction of the AIADMK, led by Sasikala appointee Edappadi K Palaniswami, won the trust vote in the unruly Assembly session held on February 18th, with 122 MLAs voting for it, it is in a reconciliatory mood. It is hard to believe this was a war zone until a few weeks ago, with snark and slur missiles being fired in full public view. Now that the main cause of the schism between the factions has been put away, a merger is said to be in the works, under a new leadership that would be amenable to the BJP’s advances in Tamil Nadu. Already, the AIADMK office has been purged of posters of Sasikala. “OPS enjoys Amit Shah’s confidence. The BJP’s national leadership has been talking to both factions and pressuring us into a merger. We are ready to sit down to talk, but the other group won’t back down from its conditions,” says a senior leader and former minister who is part of the Palaniswami faction. A merger could unite the party’s 10 million-plus cadre and restore voters’ confidence in the AIADMK well in time for the Lok Sabha and Assembly polls, and Panneerselvam’s breakaway group looks set to dictate the terms. He has demanded a CBI probe into the circumstances of Jayalalithaa’s death, and the resignation of Sasikala and Dinakaran from party posts. Fearing a backlash, Palaniswami and other senior leaders had already distanced themselves from Dinakaran even before his arrest, but they will be loath to give up their ministerial berths now. Ironically, rather than loyalty to Sasikala and Dinakaran, personal ambitions will decide if they can wangle a merger.

THE AIADMK COULD, for the first time in its history, become a level-playing field, but without a mountain of a leader to give it bearings, it may end up snatching defeat from the jaws of victory. “Never has there been such a leadership vacuum in Tamil Nadu,” says Thirunavukkarasu, an MGR protégé who was cast out of the AIADMK by Sasikala and her family, whom he dubbed the ‘Mannargudi mafia’. “Dinakaran was the only one with the experience to lead the party. He has been an MP and has spent time in Delhi. The others in the party are like many cooks having a go at the broth,” he says.

Fortunes have turned several times over in the past few months for Sasikala and Dinakaran. Sasikala, who was elected AIADMK legislature party leader following Jayalalithaa’s death in December 2016, narrowly missed taking the chief ministerial oath. Thwarted by Tamil Nadu Governor C Vidyasagar Rao who delayed swearing her in, opposed by Panneerselvam, and finally done in by the Supreme Court verdict in the 21-year-old disproportionate assets case, she surrendered, her face forged into a scowl, at the Parappana Agrahara prison in Bangalore along with her co-conspirators J Ilavarasi and TTV Sudhakaran, handing over the reins to her nephew and Sudhakaran’s brother Dinakaran. The message was that the family would rule Tamil Nadu through the machinery of the AIADMK. But Dinakaran could do little more than watch as it collapsed like a pack of cards. First, the RK Nagar bypoll that he had been hopeful of winning was repealed on allegations of bribery to the tune of Rs 4,000 a vote. Income Tax raids on State Health Minister C Vijaya Bhaskar’s premises purportedly yielded evidence of the extent of Dinakaran’s corruption. Added to this, the Enforcement Directorate had revived two old cases of financial irregularities against him and they weren’t going away: one pertained to a transfer of $10.5 million to Dipper Investment through Barclays Bank, Virgin Islands, and the other to a transfer of £4.4 million through West Bank Ltd, Ireland. Finally, he was charged with paying a middleman a large sum of cash to be passed on to Election Commission officials as a bribe to allow use of the two-leaves symbol by the AIADMK-Amma. Dinakaran has since confessed to meeting the middleman, Sukesh Chandrasekar, who was arrested from a hotel in Delhi, but claims that he thought Chandrasekar was a High Court judge and denies that any money changed hands.

SWEPT UP IN the consuming momentum of events, Dinakaran cuts a sorry figure—a powerful man without prestige, a lapsed politician upstaged by his apprentice from two decades ago, a herder of the party sheep at the Koovathur resort two months ago who can feel his life spinning out of control now. In May 1996, after being booked under the Conservation of Foreign Exchange and Prevention of Smuggling Act (COFEPOSA), Dinakaran wrote a letter to the investigating authorities declaring that he was a citizen of Singapore—his claim was rejected. In the letter, he also wrote that his wife, pregnant at the time, was so traumatised by his detention that she suffered a miscarriage. He eventually put the case behind him, came out of jail and went on to win from the AIADMK bastion of Periyakulam in the 1999 General Election. In 2004, he sought re-election from the same Lok Sabha constituency, but lost to the Congress’ JM Haroon. Now, he once again finds himself in a pit of despair and humiliation as he waits for the Centre to throw him a life raft.

Smaller Tamil parties are already beating swords into ploughshares and burying differences to forge coalitions, regardless of when the next Assembly elections may ensue. The DMK, despite its strength in the Assembly, is inching closer not just to its coalition partners, the Congress and the Manithaneya Makkal Katchi, but also to other unaligned parties. The Left parties and the Viduthalai Chiruthaigal Katchi, a Dalit party, participated in a state-wide bandh called by DMK leader MK Stalin on April 25th to express solidarity with drought-hit Tamil farmers. “The Left is a million miles away from the DMK, but we united for a cause,” says senior DMK leader Durai Murugan. “No opposition party likes the BJP’s agenda of imposing Hindi on Tamil Nadu and neglecting other issues affecting our people,” he says. With the Centre’s growing clout in mind, Tamil parties are digging into a common fund of ideas that Stalin has been lending his voice to over the past couple of months. “The Centre has been ignoring Tamil farmers’ protests and fishermen’ issues. It has not heeded the Cauvery dispute. It is only harping on imposing Hindi and the NEET exam. If the BJP keeps at it, language rather than caste will prove to be its Achilles Heel in Tamil Nadu,” says Gnani Sankaran, a political commentator. Central interference in Tamil Nadu’s affairs has been minimal since MGR’s passing—it is the only state to have resisted Rajiv Gandhi’s establishment of Navodaya Schools, which are seen as promoting Hindi over regional languages—and Jayalalithaa in particular was fiercely protective of her government’s autonomy. In leaning towards the BJP, the AIADMK now risks alienating a section of voters who are easily stirred into panic by pro-Hindi and pro-Hindu politics. The DMK will do all it can to steer such voters back into the Dravidian fold to offset the loss of votes due to the generational shift in the party leadership.

“An era of coalitions is finally upon us in Tamil Nadu. The DMK knows it cannot win by itself,” says VCK leader Thol Thirumavalavan, whose party is as yet unaligned. “I have always maintained that minority and Dalit interests can only be represented by coalition governments. But if the BJP comes into the picture, this will not happen. I want to appeal to all parties, especially to the AIADMK, not to align with a casteist- and pro-Hindi force,” he says. If filmstars like Rajinikanth keep rejecting every kind of political overture, a realignment is not possible in Tamil Nadu, he says. “Tamil Nadu is craving a political icon.” Can Narendra Modi fill the void? As Gnani Sankaran says, it is no longer about identity politics in Tamil Nadu. “It is survival politics.”