Tamil Nadu: Into the Void

Can Stalin survive without the sheltering shadow of Karunanidhi? 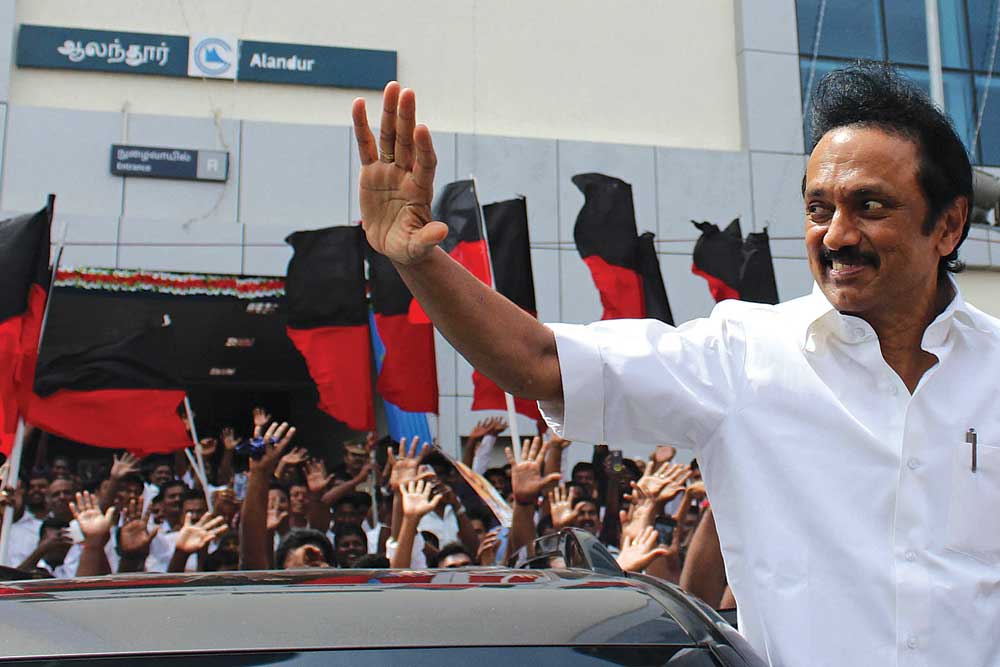 HE KING IS dead! Long Live the King!’

The King never dies. The throne shall never remain empty.

That was the message conveyed by the cries of hundreds and thousands of Dravida Munnetra Kazhagam (DMK) cadres on the day of the funeral of their departed leader, the incomparable thalaivar, M Karunanidhi. ‘Kalaignar vaazhga!’ Long live The Artist!

They did not forget to add ‘Thalapathi vaazhga!’

As they bid farewell to the president of the party who was irreplaceable for 50 years and more, they were there to welcome his heir MK Stalin, Thalapathi—or commander-in-chief— whose succession had been obvious for a long time. Even MK Alagiri, the elder son who always seemed unable to bear being superseded by the younger, appeared to have conceded as much when he asked those overseeing the funeral to hand Stalin the tricolour that Karunanidhi’s body lay covered with.

Karunanidhi had once said the DMK was not a Shankara Mutt, nor a monarchy, for him to pass his mantle of power onto a chosen heir. Yet, he showed that blood was thicker than water, even if he—the excellent scriptwriter that he was—did it with élan, making it look like a democratic decision of the party. A successor had to be elected by the DMK on capability. Stalin, his second son from his second wife Dayalau Ammal, had risen from the ranks as an ordinary member of the party. He once led the youth wing and was jailed for protesting against the Emergency under the Maintenance of Internal Security Act (MISA). He was elected to Tamil Nadu’s Assembly six times, and is still a member. He was elected mayor of Chennai twice and unanimously accepted by the party as Deputy Chief Minister in 2009 when Karunanidhi was in power. On January 3rd this year, the patriarch formally named Stalin, 65, as his heir, thus ending a long-simmering question about who would take over the party reins after his death. By late 2016, Karunanidhi was too ill to take care of the party, and on January 4th the following year, Stalin won the unanimous endorsement of the party as its working president. He assumed the role with dignity and poise, and his supporters say there was never a worry over succession. The president’s seat was not vacant.

But there are vultures hovering over the skies of Tamil Nadu to devour the remains of the dead. An air of gloom hangs over the DMK like a shroud—not merely because of the emptiness it feels after the passing away of their beloved leader, but also because of the awareness of the challenges ahead. With J Jayalalithaa, the charismatic leader of the other big Dravidian party AIADMK also having died (more than a year ago), the DMK is at a crucial juncture in Tamil Nadu politics. New battle lines and ideologies are taking shape like never before, and the political field looks almost bizarre. A medley of aspirants, from film stars to fringe leaders, the bold and the defiant, some over-smart, some just greedy, are rushing forth to fill a perceived vacuum left in politics by the deaths of the leaders of the two parties that have ruled the state for more than half a century at a stretch.

To add to the complexity, there is an invader waiting to enter from beyond the Vindhyas. The Bharatiya Janata Party that rules at the Centre with a brute majority and is eager to spread its wings across the land, has an eye out for a gateway to Tamil Nadu, where it has almost no presence. With its North Indian veneer, the BJP so far has made little impact on the Tamil psyche. The Dravidian movement began around the freedom struggle as a protest against an ‘Aryan invasion’ that was said to have brought with it its Manusmriti to be imposed upon a hitherto casteless Dravidian polity, its language and culture. The success of this Self Respect Movement in Tamil politics thereafter was in resisting that incursion, and its intent was to banish Sanskrit and Hindi, vada mozhi—the language of the north. The Movement denounced the religion of northerners and the caste system it endorsed.

Language pride, a renewed Tamil chauvinism that has a natural revulsion of all that the saffron brigade represents, runs deep in the mindset of even a generation that was not witness to the Movement, even though the Dravidian ideology has been much watered down over the past 50 years of rule by Tamil Nadu’s two main parties. Yet there are disgruntled elements on both sides waiting for a chance to taste political power, even if it means going against the ideology’s grain. There is a large chunk of the populace that is ‘tired’ of the rule of the DMK and AIADMK, though the state has not done badly at all in any sphere of development. People look for change, it is said. The BJP must be betting on that. With its boundless resources and strategists, it is a party that has mastered the art of winning.

As long as political giants like Jayalalithaa and Karunanidhi were alive, BJP attempts to penetrate Tamil Nadu had failed. Now that they are gone, there is little doubt that the BJP will try all the methods at its disposal to make an entry: saama dhana bheda dandam (‘conciliation, compensation, rupture or force’). Not that the party does not have a face in Tamil Nadu. Pon Radhakrishnan is the BJP’s Member of Parliament from Kanyakumari. But he has not been a factor in state politics. There are a number of Hindu Munnani leaders, also members of the BJP, who keep making derogatory remarks on Dravidianists that tend to anger Tamils in general. The main targets of BJP attacks appear to be DMK members.

THAT TAMIL NADU politics now has a leadership void is a message being spread across the state. This is said to be what has drawn into the electoral fray Rajinikanth, the cinema superstar who entered even before the death of Karunanidhi. The actor even had the audacity to seek the blessings of the DMK patriarch, which must have left Karunanidhi amused. If his mental faculties were as sharp as before, however, he would have been worried—worried that the massive structure he and his colleagues had toiled to build and nurture may be at the threat of new entrants who had no role in shaping the state’s history; that the DMK could be up against a formidable force backed by the Centre. That was the perception of political analysts when they saw BJP members jubilant at Rajinikanth’s announcement of his ‘spiritual politics’. S Gurumurthy, the editor of Tughlak who took over from Cho Ramaswamy and is said to be Rajinikanth’s political advisor, wrote articles in The Hindu and The Indian Express hailing the superstar’s decision to enter politics after dilly-dallying for so long and forecasting that his coming to power would effect a paradigm shift in Tamil Nadu politics.

“People always compare Stalin with his father, which is not fair,” says Kanimozhi. “He does so much for the party”

That could happen if Rajinikanth manages to cut across all sections of people in a multi-layered Tamil society. However, the teeming millions that gathered outside the hospital where the DMK patriarch lay dying at the age of 94—and their cries of anguish and love—gave the DMK a new story of hope. The idea of Rajinikanth filling ‘the void’ seemed ridiculous. How does he fit into the scheme of things? What are his credentials except that he mouths filmmaker Pa Ranjith’s scripts propagating Dalit politics? Rajini’s public utterances—his conservative, pro-establishment statements—are seen at variance with those scripts. This leaves his fans confused. And he has still not formed his own party. What vote share could his fan clubs put together have?

Whatever the figure, the outcome would likely be negative. It would cut into the votes of other parties during the next state polls and result in a hung assembly. Every percentage point counts in such a fight. The same goes for Kamal Haasan’s party. Neither actor has much of a chance to win and become the next Chief Minister, but can play spoilsport at the hustings.

That is exactly what the BJP wants, say observers. In fact, they may indirectly support another aspirant too. It could be TTV Dinakaran, the unexpected winner of the RK Nagar bypoll, a constituency left vacant by Jayalalithaa’s demise. Dinakaran is the nephew of Sasikala Natarajan, now in jail, having been indicted along with Jayalalithaa in the disproportionate assets case. There are cases against Dinakaran too. But that does not matter. He knows the art of winning and has a smile that seems to suggest to some that he is the true inheritor of Jayalalithaa’s mantle.

The DMK had not imagined that a threat would emerge from an unexpected corner. True, in the year-and-a-half that Stalin has led the party without his father’s directions, his strength and capabilities have been tested. His critics point to two big defeats under his watch: last year’s RK Nagar bypoll loss and the 2016 Assembly elections, which the DMK lost for a second consecutive time—though by less than a 2 per cent vote-share margin—to archrival AIADMK. But Stalin was still looked upon as the party’s commander because with 89 DMK and eight Congress legislators, he leads a powerful opposition in the Tamil Nadu Assembly.

Now all eyes are on Stalin. Being his father’s son has been a burden. “People always compare him with his father, which is not fair,” says Kanimozhi, his half-sister and Member of Parliament. “He works so hard and does so much for the party.” Ultimately, his success will depend on his ability to win elections for the party. A single victory would wipe out all lingering doubts about his leadership. There are by-elections approaching in Thiruparankundram and Tiruvarur. Some seniors in the party murmur that he needs to be more accommodating and take the experienced into confidence. Kalaignar was statesman-like in keeping the party’s partners in good humour. In recent days, after Karunanidhi’s death, Stalin has conducted himself in a manner that has earned him much confidence, but how he handles the party and its allies— such as the Congress—will still be under watch. Last year, when Karunanidhi was asked if Rahul Gandhi will become India’s Prime Minister, he gestured to say he will so long as the Congress remains a DMK ally. Would the DMK remain with the Congress? ‘Yes,’ he conveyed, ‘we have no other option.’

The future of Indian politics depends, it seems, strangely, on two opposite poles—the Dravidian and the Aryan.