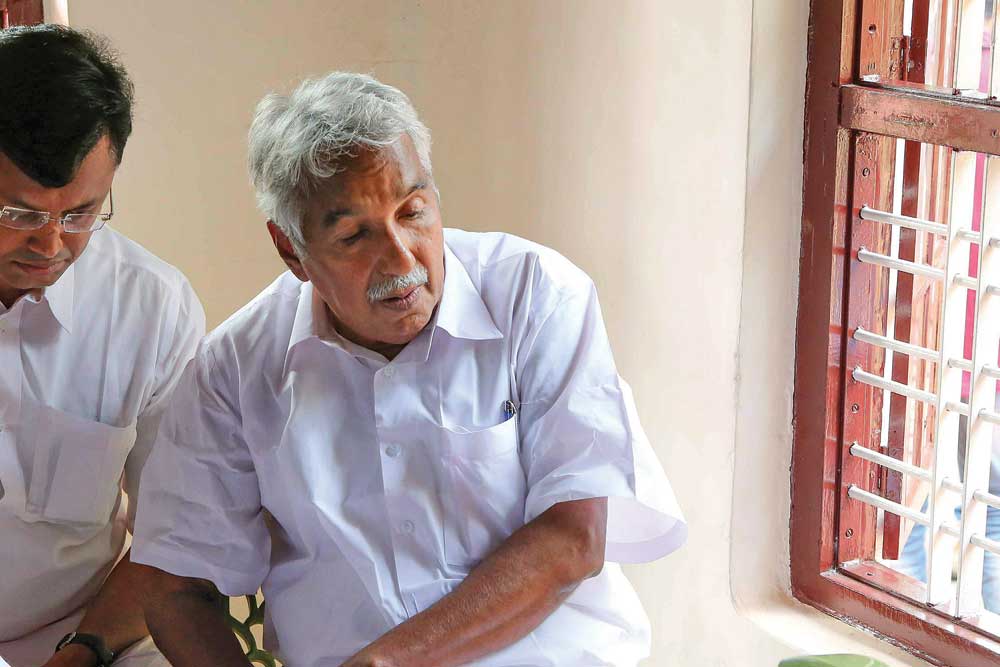 IT COULD NOT BE a worse time for the Congress party in Kerala, whose top leaders, including former Chief Minister Oommen Chandy, are caught in a string of allegations that range from nepotism and sexual transgression to corruption and financial fraud. These are related to the solar scam of 2013. A vigilance department probe has now been ordered by the state’s CPM-led Left Democratic Front (LDF) government. This decision has brought under the scanner not just Chandy’s conduct in office but also the roles of several Congress politicians, including his cabinet members Thiruvanchoor Radhakrishnan, Adoor Prakash and Aryadan Mohammed, former Union minister KC Venugopal, Lok Sabha member Jose K Mani, current legislators Hibi Eden and AP Anilkumar and former MLAs Thampanoor Ravi and Benny Behannan. They face criminal proceedings for corruption, tampering of evidence and shielding of culprits. All except Radhakrishnan, Ravi and Behannan also have to face charges of sexual harassment, based on a statement by businesswoman Saritha Nair, a key figure in the scandal, that she was raped by some of them and forced to fulfill demands for sexual favours.

The solar scam erupted four years ago when Saritha Nair and Biju Radhakrishnan, directors of Team Solar Energy Company, were alleged to have defrauded investors and customers by collecting large sums of money from them to make them business partners in their venture or install solar panels. The police began their investigation on the basis of complaints lodged by a couple of aggrieved investors. In 2013, as many as 33 cases of financial fraud were registered against them and they were arrested. Once a TV channel aired recorded calls between Nair and the personal staff of the then Chief Minister Chandy, the story took a political turn. The frequency and duration of the calls were unusual enough to raise suspicions. Word of Nair’s sexual liaisons with politicians only made the case more explosive.

The CPM, which was in opposition then, had demanded that the Chandy cabinet resign. Under pressure, his government announced a judicial probe, seen by some as a shrewd way to quell the uproar and control damage, since such commissions usually go on for too long and result in little. But this scandal was not to be brushed aside. The judicial panel, headed by Justice G Sivaraman and set up by Chandy’s government, took four years but came up with devastating findings against him, his fellow ministers and other leaders of the party last month.

Current Chief Minister Pinarayi Vijayan has announced that the commission’s report along with his government’s action-taken statement would be tabled in the Kerala Assembly within six months. According to the report issued by his office, Chandy’s office extended undue favours to Team Solar that helped them cheat customers; four of his personal staff members are reported to have mediated the operation directly under him. Cases under various sections of the Prevention of Corruption Act would thus be registered against Chandy, Radhakrishnan and Mohammed, the three main accused. Charges of Nair’s sexual violation by politicians are to be examined too (sources close to the Chief Minister’s Office hint that the report contains graphic details). The judicial commission also noted that an earlier investigation had done a shoddy job, failing to verify call records and other documents that pointed to the complicity of ministers, police officers and other government servants. Cases are now to be registered against the policemen involved and a new team would be formed. Additional Director General of Police K Padmakumar and Director General of Police A Hemachandran have already been transferred from their current positions, and are likely to be suspended from service.

A TV channel aired recorded calls between Saritha Nair and the staff of Oommen Chandy. Word of Nair’s sexual liaisons with politicians made the case even more explosive

In response to the announcement, Chandy has said he would quit public life if the allegations are proven true. Leaders of the Kerala Pradesh Congress Committee have appraised the party High Command on the crisis and claim support. After meeting Congress Vice-President Rahul Gandhi in Delhi, Chandy and KPCC President MM Hassan told the media that the party is ready to fight it out. “First of all, we have to get the copy of the judicial commission report,” said Chandy, adding that the party would exercise all its legal options.

According to murmurs, the party’s image cannot so easily be salvaged. Youth leaders like VT Balram, a legislator, have expressed displeasure over the way the party took the CPM for granted after its so-called compromise over TP Chandrasekharan’s murder case. In a Facebook post, Balram suggests that the Congress went easy on that investigation and now has itself to blame: ‘Congress is paying the price for adjustment politics.’ Radhakrishnan, however, refutes the charge that such an underhand deal was done.

The Congress leadership calls the solar scam probe political vendetta, but legal experts say this is due process. “If a judicial commission reports that a cognisable offence has taken place, the government has no option but to register a case,” says Hareesh Vasudevan, an advocate, “Usually, it doesn’t happen as judicial commission reports often go to cold storage. If someone goes to a court of law demanding legal action on the basis of the report, the court would certainly direct the government to lodge an FIR.” Adds Kaleeswaram Raj, a senior lawyer, “[Filing a case] is mandatory, but the police investigation need not be influenced by the findings of the judicial commission. If they find that the allegations have no substance, they are free to come up with totally different findings.”

THE PREVENTION OF Corruption Act is seldom used against politicians in Kerala. A recent exception was the battle fought by CPM’s VS Achuthanandan against former minister R Balakrishnappillai in a graft case. That a swift move has been made on the solar scam has come as a shock to Congress leaders, who are trying hard to ascribe political motives to it. Hassan, for example, has made much of the fact that both the Director General of Prosecutions and the Advocate General, on whose advice such prosecutions must proceed, are the nominees of the present LDF government. “The government has not sought legal advice from the law secretary. The timing of the report being tabled and action being taken is also a pointer to the political agenda of the government,” says Hassan. The criminal proceedings were announced on the day of polling for a by-election for the Vengara Assembly constituency. The Indian Union Muslim League, a Congress ally, retained the seat, but with its margin of victory falling sharply from 38,057 to 23,310 this time round. The CPM’s State Secretary Kodiyeri Balakrishnan dismisses the ‘timing’ theory, saying that the poll result could not have had anything to do with the government’s move as it was announced only after polling started. “The solar [scandal] has not been a campaign issue at all,” he says.

Nair is seen as a champion of women’s empowerment by a sizeable section of Malayalees. Her attitude has won her many fans

The immediate fallout will fade, but there are many reasons for this case to be watched closely. There is no precedent in which such a large group of a party’s top leaders, including a former Chief Minister, has got entangled in such a serious raft of charges. On the other side, there is a woman who is allegedly the ‘kingpin’ of a scam. Compounding the case, Nair doesn’t fit the stereotype of a woman vulnerable to sexual exploitation by powerful men. After released on bail in August 2013, many observe, it was she who set the ‘rules of the game’. Her narrative, which has changed many times, has been the dominant driver of media coverage.

Nair is seen as a champion of women’s empowerment by a sizeable section of Malayalees. Her attitude has won her many fans. In one instance, a ‘sleaze video’ of her went viral. She responded with a remark on the voyeuristic nature of Malayalee men. She had been playing public advisor as well, telling girls not to commit suicide even if they are cheated on by their boyfriends. She also asked women to move on if their ‘compromising pictures’ were to appear on the internet. Her admirers include Professor S Saradakkutty, a writer and activist. In an article for a Malayalam magazine, Saradakkutty describes her fight as a revolution. ‘Women need not stick to the moral standards set by patriarchal society,’ she writes, ‘Saritha is fighting back with the same weapons that society used against her to exploit and silence her.’ Nair has not been shy of making herself heard loud and clear. She even classifies whatever relationship she had with a former minister as consensual.

All the same, Nair is also the prime accused, and this is not lost on those who question the credibility of her statements. She has altered her version of events and added new names to the list of politicians who she says molested her or demanded sexual favours. During an earlier investigation, she had affirmed that Chandy was a fatherly figure. Later, in a letter ‘leaked to the press’, believed to have been sent from jail when she was in remand, Nair accused the former Chief Minister himself of sexual harassment, and stuck to this version in her statement to the judicial commission.

Several facts of the case would need to be looked into at this juncture. The Kerala government has given its assent to criminal proceedings against all the political leaders and police officers named in the commission’s report, but actual FIRs are yet to be filed. The scandal that broke out four years ago has only got past its primary stage. It could be a long while before further investigations are done, chargesheets framed and trials begin. Political fortunes will go up and down in this period. Whether everyone will stand by their previous statements, no one can predict. The plot may or may not thicken, but the politics of it likely will.