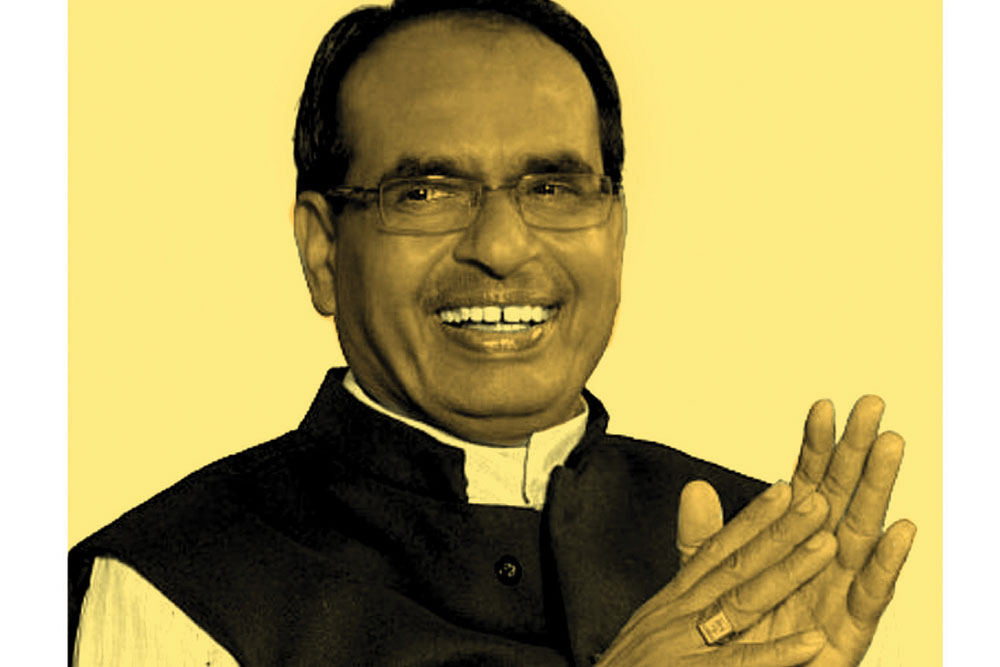 
IF CHIEF MINISTER Shivraj Singh Chouhan and Bollywood star Salman Khan go to an interior district of Madhya Pradesh together, there may be more people going after the politician, says one of his former aides. Whether this is an exaggeration could be a matter of speculation. The BJP leader’s popularity in the state stems not from any semblance to the flamboyant actor’s personality, but the stark contrast to it.

It was a Salman Khan film that Chouhan cited while trying to raise the dampened spirits of his supporters and party workers in Budhni, his Assembly seat, after the BJP lost the state elections in December 2018. “Nobody should worry what will happen. I am there…Tiger abhi zinda hai (tiger is still alive).” At that time, neither Chouhan nor his audience may have known that he would return as chief minister in 15 months.

After his three successive terms, when the BJP lost the state Assembly election in 2018 by a whisker (but with more votes than the Congress), Chouhan, exhibiting his characteristic humility, took sole responsibility for it. He immediately changed his Twitter tag line from Chief Minister to ‘The Common Man of Madhya Pradesh’, a description that he cherishes, knowing well that it endears him to the people of the state, his political turf. He made it very clear that his political ambitions were limited to the state.

At Kamal Nath’s swearing-in ceremony, Chouhan stole the show, his smile masking indignation, if any, at the Congress, which had managed to deny him a fourth term by a margin of just five seats in a 230-strong Assembly. He held up his rival’s hands on his left and those of Jyotiraditya Scindia, then a Congress leader who had lost the race for the chief minister’s post, on his right. Today, with Scindia by his side along with 22 of his supporters who have switched sides from the Congress to the BJP, 61-year-old Chouhan is back in the saddle, after a low-profile oath-taking at the Raj Bhavan, amidst staff wearing masks, and most of the country shut down in the fight against the spread of the coronavirus. It is also one of the first challenges he faces, as he braces for the crucial by-elections in the state, where every seat counts in the fragile number game. In his earlier three terms, Chouhan has enjoyed a comfortable majority in the Assembly.

The day Scindia joined the BJP in Delhi, Chouhan tweeted: ‘Swagat hai Maharaj, Sath hai Shivraj.’ The rhyming tweet refers to Scindia’s royal family background, juxtaposing his own modest background. For Chouhan, patience, another of his traits, has always paid off. After the BJP lost, winning 109 seats against the Congress’ 114, Chouhan, a party general secretary over 15 years ago, was appointed national vice president. He accepted his new role but continued to focus on state politics. His aide recalls the days of the Vajpayee regime in 1999, when Chouhan, by then a four-time MP, was told that he would be part of the council of ministers but a day later got a call from Pramod Mahajan, then a high-profile BJP leader, that he would not be part of the Government. He accepted it.

When the BJP swept the state in 2003, Chouhan lost the Assembly election from Raghogarh to Congress’ Digvijaya Singh, the then Chief Minister. In November 2005, when he was the party’s state chief, he contested a by-election from Budhni and won, and became Chief Minister. His popularity grew with each state election. An OBC face, he reached out to all, cutting across caste, class and religious identities. He focused on the uplift of women, a section forming about 50 per cent of the population, rolling out schemes to benefit girl students and women. He came to be known as ‘mamaji’ (maternal uncle).

Those who have worked with him say he has an eye for detail and a sharp memory. An astute politician, his simple, soft-spoken demeanour makes people trust him. Even allegations of his links with the multi-crore Vyapam scam, involving entrance exams, hardly dented his popularity. The anti-incumbency and disillusionment with his government were too faint to give the Congress an invincible majority. It’s his ability to maintain cordial relations with everyone that Chouhan will need most now, with the new foes-turned-friends likely to have high expectations. But the immediate task is containing the coronavirus in the state, where the number of cases had touched 14 by March 26th.