Facts and Fiction in J&K: The Convenience of Belief

A reluctance to face facts has extracted a human cost in Kashmir. Now Jammu seems unwilling to draw lessons from it 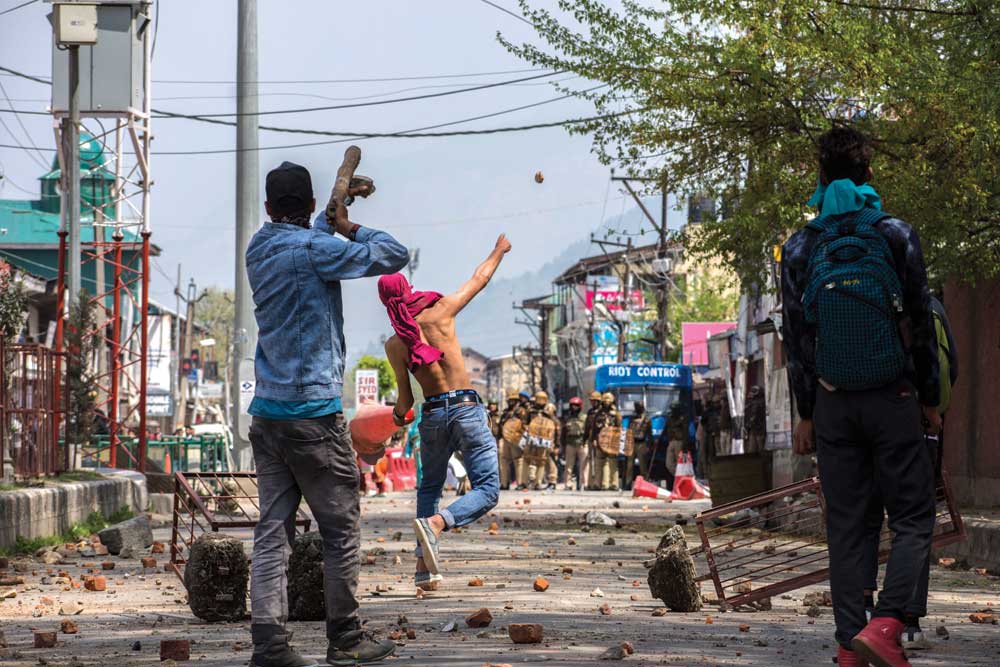 ON MAY 6TH, as heavy gunfire raged in Shopian in south Kashmir between security forces and terrorists holed up in a house, thousands of people assembled at the site, pelting police personnel with stones in a bid to help the militants escape. This has become a norm in Kashmir Valley: as soon as terrorists realise they are trapped, they make phone calls to sympathisers who in turn put out voice messages on WhatsApp urging people around the encounter site to disrupt the operation. Sometimes they succeed, sometimes they don’t. This time, security forces had information about the presence of a top terrorist, Saddam Padder, a close associate of Hizbul commander Burhan Wani. When asked to surrender, the forces got fired upon in response. Afterwards, the police acted swiftly, and five terrorists were killed, including Padder. Four others also lost their lives at the site after security forces were forced to open fire to push them back.

The next morning, Chief Minister Mehbooba Mufti tweeted: ‘The loss of five innocent civilians in Shopian serves as grim reminder that violence is no solution to the issues that plague us.’ The first part reveals Mufti’s reluctance to call a spade a spade. How can people who try to disrupt an operation against terrorists be called ‘innocent civilians’? They were not killed after security forces barged into their homes, nor did they die caught in a crossfire while going about their daily routines. It is this convenience of belief or reluctance to be truthful that has led to the chaos Kashmir finds itself in today. The state government should have instead issued a warning that people indulging in such acts would qualify as combatants and would thus have to face the consequences of their actions.

A day after, this game of smoke-and- mirrors cost a young tourist from Chennai his life. R Thirumani Selvan was hit in the face by a stone hurled at him during one of several such violent episodes; he succumbed to his injuries later in a hospital. This tragedy did not stop the barrage. On May 9th, two lady judges from Bangalore reported coming under heavy stone pelting at two places in Kashmir.

As news of such attacks spread, a large number of would-be visitors have opted out of their planned trips to the Valley, resulting in cancellations. The tourist season in Kashmir peaks in June. Many residents of Kashmir are dependent on such arrivals for their livelihood. While thousands of visitors are still landing in Srinagar, a few more attacks on tourist would have an adverse effect on the state’s tourism industry.

THOUGH SELVAN’S death has evoked condemnation from various quarters in Kashmir, there is complete silence on the recent killing of six civilians by unidentified gunmen, who have turned out to be Lashkar terrorists, according to the police. There is a simple test journalists in Kashmir employ to ascertain who the killers might be whenever such an incident occurs. If there is a call for a shutdown by separatists, it’s seen to indicate that security forces are involved. If there is silence, it is taken to mean terrorists were guilty of the killing.

Mass denial has been a major aspect of the Kashmir story. For almost three decades, most Kashmiri Muslims have held on to a belief, at least as aired in public, that it was the state’s erstwhile Governor Jagmohan who engineered the exodus of Kashmiri Pandits. Recently, a few national commentators have revived this narrative. While doing this, they have kept all facts at bay to weave a web of conspiracy theories. They do not take into account that a vicious, orchestrated campaign to evict Pandits had begun much before Jagmohan assumed office in January 1990. They ignore the fact that in March that year, Jagmohan had issued a press statement asking Pandits to stay back, promising to settle them in temporary camps within the Valley. It is another matter that by this time, the Valley’s Pandits were too scared to heed his advice. Many brutal killings had happened and it was clear in many cases that neighbours, friends and colleagues had turned against them. In 1997, on being asked about the Jagmohan conspiracy theory, Ghulam Mohammed Sofi, editor of the Srinagar Times, had called it “a total lie”. “It is part of systematic propaganda,” he said, “The Pandit flight from the Valley was the sequel to a plan hatched well in advance from outside the state. It had nothing to do with Jagmohan.” Recalling the turbulent 90s, he added, “There was no administration worth the name anywhere in the state… I mean in the Valley. Police stations all over the Valley were centres of operation for the militants. Jagmohan could not have done anything. Nearly 32,000 Kashmiri Pandit houses have been burnt since 1991. Is there Jagmohan’s hands in this too?”

For decades, Jammu has been wary of Valley politics; it now fears that the Rohingya influx may be part of a design to alter its demographic profile

It is the same convenience of belief that has made Kashmir-based journalists write reports based on the police chargesheet for the Kathua rape and murder case. But the same journalists did not even consider reporting the Shopian fake rape and murder case of 2009 based on the chargesheet filed by the Central Bureau of Investigation with overwhelming evidence.

In Kathua, it’s the same reluctance to look at facts that has led sensible people to shun the dictates of logic and drum up a din of conspiracy theories. The first major polarisation between Jammu and Kashmir in recent years happened in 2008 during the Amarnath Yatra fiasco. But after that, Jammu has remained peaceful, offering a sanctuary to members of many communities, including Kashmiris, many of whom study or work there.

Around eight years ago, Rohingya refugees began to make their appearance in Jammu. No one knows who brought these refugees there. In 2017, the state home department stated in the Assembly that 5,743 Rohingya refugees were staying in the state, in Jammu division (though the number is said to be higher). It said that they had entered the state on their own. For decades, Jammu has been wary of Valley politics; it now fears that the influx of Rohingya settlers may be part of some larger design to alter the region’s demographic profile. That Rohingya refugees reached all the way there is a genuine concern that should have been tackled independently. But with the brutal rape and murder of a nomadic girl in Kathua (near Jammu), and the subsequent arrest of the accused by the state police’s Crime Branch, many residents of Jammu have made the mistake of conflating the two. A month after the incident, a rally was organised under the banner of ‘Hindu Ekta Manch’ to press for the release of one of the accused. In April, a few lawyers tried to prevent the police from filing a chargesheet, filling the air with cries of ‘Jai Shri Ram’, as if this would subsume India’s Constitution.

And then came an avalanche of lies and propaganda around the case on social media. When news broke of the police findings, many people in Jammu began putting up smug posts on social media about how Delhi journalists were ignorant of what had happened. But what were the facts? That they wouldn’t say. It was like a free-for-all Arabian Nights tale in which anything could happen. It began with a lie that the girl’s biological parents were dead and that the killing was the result of a property dispute. Then rumours were floated that the police had changed the victim’s vaginal swabs. When the forensics report suggested no spermatozoa could be found (which does not rule out rape in any case), they began to claim vindication of their stand. Then self-styled activists and journalists descended upon Devisathan in Rasana village, trying to gather support for what they claimed were loopholes in the police chargesheet. They moved around with cellphone cameras, arguing that the door of the place had a grill and since anyone could peer inside, it was impossible to keep someone hidden. They said the table under which the girl was reported to have been kept unconscious was too small. They said there was a regular stream of people visiting the place and that it was regularly cleaned. It did not matter that the chargesheet filed in court includes pictures of a thick mesh on the door which has been surreptitiously removed; that pictures of its interior taken at the end of January show thick cobwebs.

Many locals in denial of the crime realised their mistake later. They said they had only wanted the case to be taken away from the Crime Branch and handed over to the CBI. But by then, it was too late. There was evidence of what had been said in the local rally in favour of the accused.

IN HIS BOOK, Nothing Is True and Everything Is Possible, Peter Pomerantsev describes a visit to Ostankino, which houses Russian TV and Radio Broadcasting Network, which he refers to as the ‘battering ram of Kremlin propaganda’. At one of the meetings on his visit, a top Russian political TV presenter says: “We all know there will be no real politics. But we still have to give our viewers the sense something is happening. They need to be kept entertained. So what should we play with? Shall we attack oligarchs? … Who’s the enemy this week? Politics has got to feel like . . . like a movie!” It is with similar zeal that a few in the Indian media, especially on TV, have continued to air theories on the Kathua case that have no basis in truth.

It is now for the judiciary to do its job. It should not be forgotten the case is still under investigation and the police will file a supplementary chargesheet depending on, among other things, an FSL report which is awaited. It includes CCTV footage of one of the accused getting down at a railway station in western UP where he studied. It also includes footage of the examination centre where he said he was taking an exam around the time the police claims he was in Kathua. The police are yet to establish the money trail in this case, as claimed in their chargesheet. But till then, let us not confuse facts with theories that cannot be substantiated.