Pinarayi Vijayan, the strongman of the Kerala CPM, puts the Congress-friendly Sitaram Yechury in his place 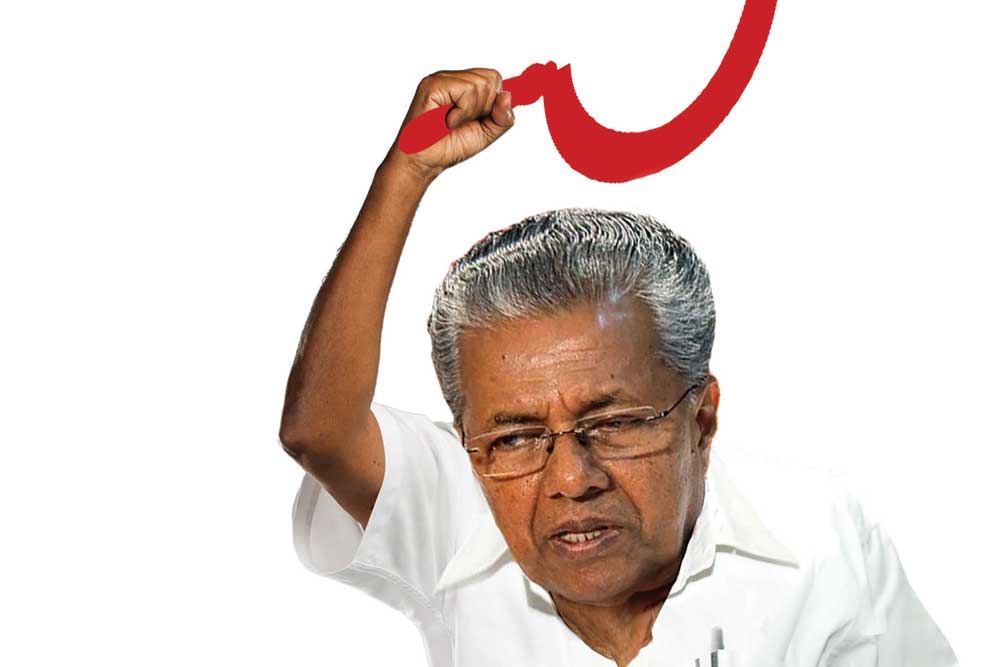 LIKE MOST OF his puritanical predecessors in the Stalinist confines of the Communist Party of India-Marxist (CPM), Kerala Chief Minister Pinarayi Vijayan is a reluctant conversationalist. His interactions with the media are always guarded. He belongs to a generation of Marxists taught to be tight-lipped about the goings-on of the party apparatus, unlike the CPM’s younger General Secretary Sitaram Yechury, a former student leader who rose rapidly to the top echelons of the party. Interestingly, Yechury is said to have told a few reporters in the Central Hall of Parliament recently that the decision on whether he should return to the Rajya Sabha for a third term with Congress backing “would be clinched by voting”. In direct contrast to Kerala’s Chief Minister, Yechury’s penchant for humouring reporters with spicy details of infighting within the party and unseemly commentaries on his colleagues is well known. Some of his remarks, made even to junior reporters, are often seen as ‘youth Congress-like behaviour’ by his own party men, who rarely speak about differences of opinion among themselves in informal chats with journalists.

Of course, Vijayan has had his share of blowing his top in response to innuendos against him by his one-time mentor and later rival, VS Achuthanandan—he would address press conferences to air his misgivings about Achuthanandan’s remarks. On one such occasion, Vijayan took objection to the CPM patriarch placing him in the ‘needle of suspicion’ while speaking about a ‘media syndicate’ in Kerala. Vijayan had alleged that a cabal of reporters was out to malign his image, ostensibly at the behest of his then arch-rival. Yet, Vijayan and Achuthanandan fought their battles openly and not through whispers and slurs in friendly meetings with media professionals. Before he was named to the top post, Yechury used to refer to the trio of former General Secretary Prakash Karat, his wife Brinda and senior CPM Politburo member S Ramachandran Pillai as ‘sahib, biwi aur ghulam’, much to the delight of some reporters.

So it was a departure of sorts when Vijayan, former Kerala CPM secretary who retains a vice-like grip over the state unit, spoke to a national daily on the day of the vote—at a meeting of the party’s high-level Central Committee—to settle the question of Yechury’s re-nomination to the Rajya Sabha. It was sure to be a test of nerves, and it was uncharacteristic of Vijayan to have spoken his mind shortly before it went down to the wire. The Chief Minister spoke out against any proposal to seek Congress help to get his party chief back in the Rajya Sabha from West Bengal. He listed his reasons, the foremost being the political tactical lines of the CPM that were adopted at the last Party Congress of the CPM in Visakhapatnam in 2015, professing the politics of equidistance from the main opposition Congress and the ruling Bharatiya Janata Party (BJP). Speaking to Open , S Ramachandran Pillai says, “Vijayan had only spelt out the rationale behind the party’s Politburo deciding against a third term for Yechury.” Pillai elaborates on the three key reasons offered: firstly, it is against the spirit of the last Party Congress to align with the Congress for such gains; secondly, the General Secretary of the CPM has to play a larger role in the national scheme of things rather than be a member of the Rajya Sabha. “The third is that the party is against giving a third term in Parliament or [any] legislature to secretaries, be it at the district level or the state or the Centre,” Pillai states.

The outcome of the vote was a humiliating setback for Yechury, who was backed by only 28 members in the 90-plus member Central Committee. According to at least three of its members, not a single one from Yechury’s home state of Andhra Pradesh voted for him

Contrary to his public posture and statements in the Politburo of his party, Yechury seems to have nursed an ambition to re-enter the Upper House, says a Politburo member of the CPM. On July 25th, at the Central Committee meeting of the party, some members from its West Bengal unit suggested that the panel go for a vote to decide whether the party chief should seek another term with Congress backing. Their contention was that the party risked losing a Rajya Sabha seat in the absence of such an approval because the Congress offer had been made on the condition of Yechury being the candidate and not any other party member. “Maybe Yechury, who enjoys the company of Congress leaders and has a great affinity towards the West Bengal unit, didn’t want to disappoint either, and therefore went with the flow,” says a party leader from West Bengal close to Yechury. Leaders such as Biman Bose and Surjya Kanta Mishra, who had backed Yechury’s Rajya Sabha candidacy, didn’t respond to calls.

Yechury’s term in the Upper House ends on August 28th. Fresh nominations to the House had to be filed by July 28th. “He kept saying he didn’t want another term because it was against the party’s norms. But as anyone familiar with the dynamics of any party knows, his decision not to put his foot down and say that there should be no vote over the issue because he was not in the fray, sent conflicting signals in the party,” says another CPM Politburo member.

The outcome of the vote was a humiliating setback for Yechury, who was backed by only 28 members in the 90-plus member Central Committee. According to at least three of its members who Open spoke to, not a single one from Yechury’s home state of Andhra Pradesh voted for him. Yechury did not respond to queries from Open.

CPM’s prospects in West Bengal look bleaker with the BJP making inroads. “When riots were triggered in parts of the state close to the border with Bangladesh, the party couldn’t intervene positively,” says a senior CPM leader

For a leader who rose to power two years ago in a fiercely fought internal election against rival Pillai, who had the backing of the powerful Kerala unit of the CPM, Yechury had, in April 2015, gone against tradition and pressed for a vote in the Central Committee of the party to secure the top post. He was looked up to back then for his resolve in campaigning democratically for a post for which he was a contender as early as 2005, the year his predecessor and rival Prakash Karat took over. Colleagues from West Bengal rallied behind the affable leader who was then 62, to trounce the nominee of the Kerala unit, Pillai, who was 77. At the summit there, he looked ambitious and driven, and what was then described as his coup had won him the admiration of many. Open had reported that Yechury fought to the finish because his main grumble back then was that Karat had not kept him in the loop on crucial matters even while holding parleys with allies. Instead, he allegedly relied on his loyalist Pillai and wife Brinda. Since Karat’s ascension in 2005 and Brinda’s induction into the Politburo the same year, the otherwise unflappable Yechury had turned bitter and grumpy (See ‘What’s Left, Comrade Yechury?’ April 24th, 2015).

But over the last two years, the man who had vowed to arrest the party’s decline and revive its poll fortunes has not made much headway. From 2004 to 2014, the CPM’s Lok Sabha numbers fell from 43 to nine. In West Bengal, where elections were held last year, the party ended up in dire straits, causing a major embarrassment to Yechury, who had bet big on the arithmetic of an alliance with the Congress in the state— something that was fought tooth-and-nail by other state units, especially those of Kerala and Tripura (where the CPM Chief Minister Manik Sarkar- led dispensation is pitted against the Congress).

In the 2014 General Election, the combined vote shares of the Left Front and the Congress (30 per cent and 9 per cent, respectively) equalled the TMC’s 39 per cent. While the CPM as well as the Congress have been losing the support of poorer voters—Muslims, SC and ST groups—Chief Minister Mamata Banerjee had won them over through populist schemes and symbolic gestures. As of now, CPM’s prospects in the state look bleaker with the BJP making inroads. “It is a pity that when riots were triggered in parts of the state close to the border with Bangladesh, the party couldn’t intervene positively and make an impact,” says a senior CPM leader from the state who is opposed to the idea of a third term for Yechury. “What is the use of someone getting a Rajya Sabha seat when the party is not able to mobilise cadres and protect people of a state that needs help?” he asks. Much to Yechury’s anguish, even some leaders from Bengal opposed his candidacy. Senior leader Tapan Kumar Sen, one of the two Rajya Sabha members from West Bengal who will retire in 2020, was against Yechury getting a seat in the House with Congress support. In the six seats from West Bengal for which elections will be held this month, five would go to the Trinamool Congress and one to the Congress. The Congress wouldn’t have fielded anyone if Yechury had contested the poll.

“It is in the context of Yechury’s underperformance as party chief that the rejection of his candidature comes as a tight slap in his face. Besides, this time, the Kerala unit of the CPM that had to bitterly accept his win against Pillai in 2015 seems to have hit back with a vengeance,” says a senior CPM leader from Tamil Nadu. Pillai, however, insists that it is all about the party’s ideological position. “We can’t have any truck with the Congress at the national level and then seek votes against the Congress from the people of winning states like Kerala and Tripura,” he notes. These states hold the key to its future in more ways than one. At the 2015 party conclave, senior Kerala leader Elamaram Kareem had complained that the party’s central leadership had treated Kerala badly, despite the ‘gains’ the party organisation had made in the state by going slow on action against people who had violated party discipline. He was referring to Achuthanandan. Open had quoted Kareem stating that the Kerala unit contributes a large sum of money for the party at the national level. Now, by breaking his public reticence on internal party affairs, Vijayan has sent a blunt message to the Congress-friendly Yechury: do not sleep with the enemy.