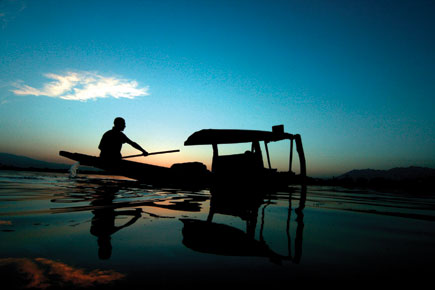 
On the way in from the airport, your Sumo is more than likely to be waved aside by semi-automatics on the ready, for an unending cavalcade of bulletproof vehicles to move speedily past with sirens blaring. You could well ask if any chief minister’s life is worth this imposition. It is a question valid even of the Prime Minister in Delhi, but in a big city he is not the daily headache that Omar Abdullah is in Srinagar. And the cavalcade is but the beginning. Where else does it seem that even traffic cops do duty semi-automatics in hand? Where else, on your way out, is your baggage checked and screened even before you are within sight of the airport? What, if anything, should you be doing in a place such as this as a tourist? Aren’t there more peaceful places in the hills of Himachal? Why should you travel to the Valley when you could easily visit a hundred other places in the country?

I can think of two partial answers. The first is the simplest and truest. I recently returned to Kashmir after almost 33 years, far too unsure of the language and my knowledge of the region to venture to report on a conflict I did not completely understand. It was clear that many things had changed since the 1970s, among them the security, but one thing had not. In my travels in the intervening years, I have found no place quite as beautiful as the Valley. As a child, my family would often drive from Jammu to Srinagar, a long arduous journey along a winding road where a slow-moving Army convoy up ahead could add hours to the travel. As the road inched up the heights, both the heat and monotony of the Punjab plains would give way to cool mountain air and views of gorges and mountains. Aware of what lay ahead, I would count the hours to the Banihal Tunnel. At the end of a kilometre of darkness, water seeping in from the mountain pressing above, the mouth of the tunnel would open to a view of the Valley, a sight beyond description, best seen for oneself.

On my return so many years later, I take the flight. In less than an hour, snow-clad peaks are visible once the plane takes an abrupt turn past Pathankot. Soon, the Valley lies below, and flashes of yellow from mustard fields break through the clouds as the plane descends. Done with the security, thrust aside by Omar’s cavalcade, I finally make it to the houseboat a friend has recommended. Farooq, the owner, is a taciturn man. I mention the security as a conversation starter. “It is the gun,” he says, “There is no trust left anymore.” I soon realise his imperfect English and staccato manner lend an oracular air to even the most commonplace of utterances. He owns six houseboats along one of the best stretches of the Dal. His father had bought these parking slots decades ago, each slot now valued upwards of Rs 50 lakh. I am paying Rs 1,800 a night for a large room with a clean attached toilet, a basic breakfast thrown in for good measure. Business is down, Farooq says, but sitting in a boat barely two years old, he adds he already has another one under construction. “We build the bottom on the shore by the lake,” he says, pointing to the floor, “and then slide it out on banana leaves. We slaughter three or four sheep,” his hand at his throat, “for good luck.”

In the time it has taken for the conversation, the sun outside has given way to dark rain clouds that soon start pouring. Clouds hover over the peaks on our left, the fort of Hari Parbat still visible on our right. Acquaintances have dropped by, linked through friendships forged in Delhi. The talk veers to the summer that lies ahead, the memory of the events of the summer past far too vivid to need any invocation. The young have lost five months, classes in schools and colleges have been disrupted, business has been hit. On a trip through the city, they point to a shopping complex inaugurated just over a year ago; not a single shop has opened. No one wants another summer to unfold the same way, though everyone fears it will. The young speak of large-scale preventive detentions, of FIRs left open to allow the police to swoop down whenever they want. At such times, it does not matter what the truth is, what people believe is what determines the course of events.

This is the second thing a tourist can do—listen. On my return to Delhi, someone asks how I reconcile my strident opposition to ideas such as Khalistan with this quiet response to Kashmiri demands. The answer, I believe, is simple and central to how we respond to Kashmir. In Punjab, I speak as an insider, I carry a conviction that counts: those who feel we can carve out a republic from the outside are fools. If those who speak for India are but a handful in Kashmir, then that is the reality we must deal with, it can’t be wished away because we believe otherwise.

Back on the houseboat, Sunil the cook is from Bihar. He says he came here two years ago because he wanted to see snow. Last year, he stayed through the winter. He points to a small garden shared by two houseboats: “It was covered by seven to eight feet of snow.” And what about last summer? “Simple, when trouble breaks out, I don’t leave the houseboat.” He says he is in no hurry to go back, “It is just so beautiful here.”

As a tourist then, you can do worse than pay heed to Sunil’s words. It is beautiful here, and if trouble lurks, there is always the houseboat.