What the Eye Can’t See. Yet

Welcome to the world of augmented reality. All it will take is a pair of Terminator-style hi-tech glasses, and your wish will be the web’s command 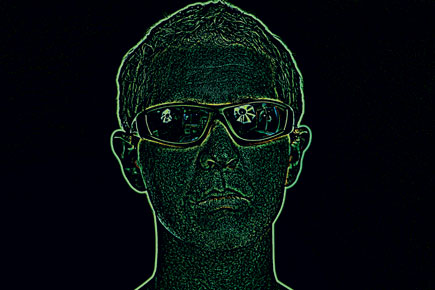 Take a pair of Terminator-style hi-tech glasses, and your wish will be the web’s command


For a pair of looking glasses to excite the world, a number of factors must come together. It must promise something fantastic. There must be sufficient reason to believe that whatever it promises will one day happen and move beyond the laboratory into your hands. It must be connected to a popular symbol, an identification that instantly makes it an object impossible not  to crave.

Last week, the Richter scale of the tech world went up a point when the website, 9to5google.com, which tracks what Google is up to, put out a news item titled, ‘HUD Google Glasses are real and they are coming soon.’ This was not the first time news had appeared that Google had a secret project underway to make sunglasses akin to what you saw in The Terminator. The glasses would scan the world around you through an inbuilt camera and give instant information and analysis on it. ‘A user can walk around with information popping up and into display—Terminator-style—based on preferences, location and Google’s information,’ in the words of 9to5google, when it broke the story in December last year. The website’s latest report says its source has managed to see the prototype. Rumour has therefore made the grade to reality (if the source is not running an elaborate hoax, that is), and it is only a matter of time before the glasses make their real-life debut.

The Google Glasses, according to the source, look like a brand of Oakley MP3 sunglasses called Thumps. A little camera is built into its sides. The Terminator-style display will only be in one glass, and, just to show how misleading analogies can be, the glass will not be transparent when the display is on, unlike the pair Arnold Schwarznegger had in the movie. To navigate, you tilt your head. So, in effect, your head becomes a mouse. According to 9to5google, it’s not as weird as it sounds, and a user can pick it up really fast. Instead of a keyboard, you use your voice for inputs. You may also get voice output. So, to imagine a scenario, you could look at a poster of Don 2 through these goggles and ask, “What was the previous edition of the movie called?” and a little voice near your ears would reply, “Don.”

On specifications of the device, the website says, ‘As a guess, we would speculate something like 1 GHz ARM A8, 256 MB RAM and 8 GB of storage?’ Note the word ‘speculate’. It means a guess.

In The Terminator, Schwarznegger could scan faces, calculate distances, decide whether the opposite party is armed, what they are armed with, and then after he blasts them away, gauge the exact damage caused. No one has a clue what the Google Glasses will be able to do, but it will definitely be a fraction of all that. At least in the beginning. Also, since Google is making it, it is not likely to be designed with your interests in mind. The primary purpose of the Glasses will be to make Google money from whatever it is the Glasses can show you. To obtain and interpret web data, the goggles will be hooked up to the Android phone in your pocket (till other manufacturers make their own glasses for their own operating systems). Another news bit says that instead of using the phone as a connector, the goggles will log onto the internet directly. In any case, it needs web access to make sense of what the camera is seeing. You shouldn’t be surprised to see a little sidebar with advertisements targeted exactly at you. Say, you are crossing Big Bazaar, a little scroll would go, ‘Trouser Mela on. Upto 50% off.’

It must be repeated here that Google itself has not breathed a word of it. So everything is just intelligent speculation at the moment. But you get some indication of what is possible from the man said to be heading the Google Glasses project. Richard DeVaul worked on what was called ‘The Memory Glasses Project’ for his dissertation at MIT. That system, according to their homepage, set out to behave ‘like a reliable human assistant that remembers reminder requests and delivers them under appropriate circumstances. Such a system is qualitatively different from a passive reminder system (such as a paper organiser) or a context-blind reminder system (a modern PDA), which records and structures reminder requests but cannot know the user’s context.’ In other words, the glasses would be intelligent enough to understand what is pertinent to a user and then remind him of it. Vaul, along with his two co-authors, visualised the university project primarily as a medical tool for people with memory disorders, like old people. There is a photo of the device on the website. It shows what looks like Aviator glasses connected to an ocean of wires and chipboards and batteries. It would have been about as comfortable as carrying a disassembled computer on your person with the goggles thrown in.

Vaul later joined Apple, was then poached by Google, and made the ambitious leap to colonising the human senses as Google no doubt wants to. What the Google Glas- ses prototype also shows is what happens once an idea gets loads of dollars pumped into it—it becomes easy to fit.

Will you ever don Google Glasses? We don’t know. Google, according to 9to5google.com, is not sure that it has mass-market appeal and might do a pilot launch to test demand. Also, it is not necessary that Google will own your eyes in the future. In technology, the first mover does not always win. Bill Gates was one of the early infotech barons to envision the tablet’s popularity. But the tablets that his vision spawned found few takers—it was just a more complicated laptop with a reversible screen and stylus. It took Steve Jobs, touchscreens, finger-swipes and the iPad to set that ball rolling.

Right now, Apple is also working on technologies like hi-tech glasses. A New York Times article by Nick Bilton in December spoke about secret projects by Apple and Google on wearable technology so that they could sell more phones. ‘One idea being discussed [by Apple] is a curved-glass iPod that would wrap around the wrist; people could communicate with the device using Siri, the company’s artificial intelligence software,’ he wrote. The article quoted Michael Liebhold, a wearable technology researcher, who thought that people would not just be wearing glasses with inbuilt screens, but taking the next jump to contact lenses that behave in similar fashion. So, now imagine the Terminator with contact lenses to picture which way the Google Glasses will evolve. And all that, says Liebhold, within the next decade. ‘Kids will play virtual games with their friends, where they meet in a park and run around chasing virtual creatures for points,’ he said in the article.

It is not just sunglasses. The category to which devices like these belong is called ‘wearable technology’ and they have been around ever since man first put a watch around his wrist. Except that a wristwatch is an amoeba in the calendar of technological evolution. After the chip came into being, technologies that you wear can also think and interact at some level. For example, an earring that also doubles up as a Bluetooth earpiece, which already exists, if at a stage just beyond the amoeba in comparison with what might come our way in the future.

There is much fantastic wearable technology that does the news rounds. From a portable jet-propulsion engine under your shoulders to an invisibility cloak (it’s a fair bet that when they set out to test it, there’s going to be egg all around because if something sounds too fantastic to be true even by the standards of fantastic ideas, then it possibly is), which works on the principle of light being deflected so that it does not return from a surface to the observer’s eye. Or there are exoskeletons—those wearable robots you first saw Sigourney Weaver put on in Aliens two decades ago and which you recently saw in Avatar—being designed for use in war by the US Defense Advanced Research Projects Agency (it also has medical applications). But these outlandish technologies, even if they come into being, don’t seem the sort that ordinary folk will get to lay their hands on. Something like Google Glasses, in contrast, makes a promising case for popular adoption. It fits all the criteria of a technology that is radical, has good reason to be in your hands (so that Google can make money fast), and which you are already familiar with, having seen The Terminator.

Of course, it might not reach you in a hurry. But the funny thing is that when it finally does become part of your body, you might not think of it as anything extraordinary. For example, 30 years ago when you had to wait years and years for a phone connection, if someone told you that you would one day be able to buy over the counter a wireless phone a fourth the size of a Walkman, it would have been incomprehensible. But now it seems all too commonplace to evoke even the slightest wonder. Or take the e-reader. Who could have imagined even 10 years ago that your entire book collection could travel with you in a device slightly bigger than a pocket diary? Yet no one looks at the Amazon Kindle or the many e-readers it has spawned with any wonder anymore.

Likewise, ten years from now, when you wear your Google goggles and walk down the street talking to yourself, it will be just one more aspect of your daily routine. Imagine that.