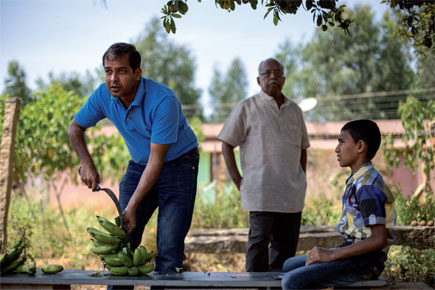 On a warm Saturday morning on the outskirts of Bangalore, on a 400 sq ft plot, Sajith U is busy digging. Next to him, his wife Deepthi harvests carrots. Four-year-old Amanyu watches his parents toil on their little patch of land as he eats his snack. It is a family thing. After five days of being busy infotech professionals, every Saturday the couple drives nearly 20 km from their Bangalore flat to their plot. They till the soil, sow seeds, put in manure brought from their ‘smart compost pot’ at home, and harvest their crop. By noon, they have a bagful of organically grown vegetables and the promise of more when they return to their ‘farm’ the next Saturday.

“We eat what we grow. What could be better,” says Deepthi, a software engineer with Intel by day and a farmer on weekends. “It started with gardening and then growing vegetables in little pots at home. But when we got a taste of what we grew, we wanted more.”

And so the family made the transition from their balcony garden to a plot of land at Green Thumb Mini Farms at Kodati village on the fringes of the city, not very far from the infotech hub on Sarjapur road. On plots leased out for Rs 2,000 per quarter, all the seeds Amanyu saved for ‘amma’s garden’ and the waste for ‘amma’s compost’ was put into the soil, and what grew amazed and delighted them. “In the last three months alone, we have harvested cabbage, cauliflower, tomato, carrot and all varieties of greens. And we share our produce with others here.”

Deepthi, like many others, is now a ‘seed hunter’. “Everywhere we go, even on holidays, we look for seeds and carry them back with us to the little plot that promises so much,” she says. “We grow three varieties of ladyfingers, including a red one. I don’t like to eat it, but love growing it. And the beautiful cabbages and cauliflowers we harvested tasted unlike anything we have tasted before.”

One of the other successful ‘weekend farmers’ with an envious array of veggies growing on her plot is Sumathy Sreekumar, who grew up listening to songs while she took care of a vegetable garden back home in Kerala. The software professional carried her love for plants to the city and began by growing flowers in her balcony.

Freelance writer Aparna George experimented with a few pots and now has a terrace garden full of fruits and vegetables, including mandarin oranges and lime. Her plot at the Green Thumb Mini Farms is next to Sreekumar’s.

All of them are part of a growing community of Bangaloreans who spend their weekends farming, courier seeds to each other, barter saplings, excitedly share pictures of the quantity and size of their produce, celebrate Kitchen Garden Day every 28 August and constantly look for ways to spread the message of “oota from your totha” (food from your garden).

The journey, which began nearly 10 years ago with simple workshops on organic terrace gardening in the city, has now transformed into a movement.

Among those giving Bangaloreans the space to cultivate their own food is Anand Maddur. After working for 12 years in the United States, the engineer with an IIM degree came to Bangalore and decided that he wanted his own kitchen garden. “My search for agricultural land brought me here,” he says, standing near his banana plantation and the smaller plots he leases out to enthusiasts like Sujith and Deepthi. After weeks of talking to local farmers and jotting down farming tips, Maddur found exactly what he was looking for—land that he transformed into his Green Thumb Mini Farms. His initial investment was Rs 2 lakh.

In April 2012, Maddur got his first customer, and before he knew it, all his 30 plots on three acres of leased land were taken. “Almost everyone was an IT person and it didn’t surprise me,” Maddur says, standing under a chikoo tree. “You know, these guys are stuck in a room and sit in front of their computers for eight to ten hours. They want some time in the sun and this is far better than a weekend family outing at a mall.”

Access to the mini farms is restricted only to those committed to the idea. “Most have tried it out in their balconies and terraces,” says Maddur. “But a couple of newcomers have approached us. They want to cultivate organic cherry tomatoes and then sell [them]. Leasing out land to them will be a first in terms of allowing inexperienced people in. But they seem driven.”

During the week, Maddur has hired help to water all the plots and ensure general upkeep. For an additional charge (Rs 25 for de-weeding and Rs 45 for mowing), he ensures that those who can’t make it to the farm don’t lose out on their crop.

No pesticides are allowed on the farm and handy hints to tackle pests with neem sprays and herbal concoctions are liberally shared. “I go through the same process that all the others here do, so we kind of anticipate each other’s problems,” says Maddur. “I’ve grown corn here and now have this banana plantation. The only problem we face is water, and if that is sorted I will be more than happy to create more plots for other enthusiasts.”

In another part of the city, mechanical engineer Laxminarayan Srinivasaiah is leasing out 1,000-sq ft plots for Rs 4,000 per quarter and Rs 12,000 annually. “It started during the 2008 financial meltdown,” says the 38-year-old employee of SAP labs. “We were sitting on the bench a lot and ended up visiting relatives back home and saw them grow things. I had the time, so I came back and started replicating it on my terrace. The common complaint was that there was seepage.”

Srinivasaiah put his mechanical engineering skills to work and created containers that were on stands a couple of inches above the ground. The results were “phenomenal”.

“Community farms are the only way out for a lot of us,” Srinivasaiah says. “There are multiple reasons so many people want to do this, the most important being safe food for our children. Terrace growers eventually want more space and there is a lot of empty barren land around the city that can be used. Water is the only issue. But with drip irrigation techniques, it is possible to overcome [it].”

Most Bangaloreans began their search for “safe, pesticide-free food” around the same time, and they all drew their inspiration from a basic workshop on organic terrace gardening started in 1995 by Dr BN Vishwanath, who says it all began with a “silly idea”. An entomologist by profession, Vishwanath spent years teaching at an agriculture university in the city, besides making films on agriculture and then finally working with bio-fertilisers.

“I had always told people how to kill the insects that invaded their plants using pesticides,” says the 70-year-old man, synonymous with organic terraces in Bangalore. “In the early 90s, everyone in Bangalore was talking about rising temperatures in the city and the increasing pollution. Somewhere, it was linked to [shrinking] green spaces. In 1992, I turned organic and it would have stopped there if not for a plane journey from Delhi to Bangalore.”

Looking down at the garden city from his plane window, Vishwanath says he was struck by the number of “reflecting terraces” he saw. “They gave the impression of heating up the environment around them even more, and I thought, ‘Why not grow plants on these terraces to cool things down a bit?’ A friend said, ‘Why not vegetables instead?’”

So in 1995, he organised his first workshop on organic terrace gardening; 100 people attended, 75 of them women. For 10 years, Vishwanath held classes packed with enthusiastic people who wanted to know how to use their terraces and balconies. He grew his own terrace garden so he could actually show people what it meant and how it was done.

“The classes were full but they were not getting converted into gardens,” he recalls. “Between 1995 and 2005, there were hardly 15 terrace gardens that came up in the city. In fact, for the first five years, I don’t remember getting any calls post the workshops either. It was disappointing and I considered stopping the workshops in 2005.”

But that year, everything changed. Describing it as a “tremendous year”, Vishwanath says that the movement was taken over by young professionals, architects and builders. Suddenly, his phone rang incessantly and callers wanted to know how to deal with a pest or seepage. “The calls confirmed that the movement had gained momentum.”

Around the same time, Aparna George joined Vishwanath’s Garden City Farmers, a non-governmental organisation that focuses on ‘educating citizens on the benefits of organically grown food, the need for urban farming, fostering the set up of urban farms/kitchen gardens and reducing food miles, leading to a healthy ecosystem.’

Out of it grew the Organic Terrace Gardening group, which boasts 15,157 members on Facebook and is now a closed group. Both George and Srinivasaiah contribute as admins.

“The thing is, in Bangalore the weather is such that you throw any seed and it will grow. That gets you hooked,” says Srinivasaiah, trying to explain why every other terrace in the city is aspiring to be a garden better than the next. “And of course, the city has traditionally had a lot of gardeners. It’s in the city’s genes, I guess, and that’s why the ‘grow your own food’ idea has caught on so much here, more than anywhere else.”

The trend was identified way back in 2008, when the Resource Centres in Urban Agriculture and Food Security Foundation identified Bangalore as one of India’s cities for a pilot project on peri-urban agriculture.

Their final report, published in 2009, stated: ‘In Bangalore city, the resident associations are focusing on identifying… citizens [interested in] getting trained on home gardens—in their terraces, backyards and front yards. The focus is on helping… citizens… grow pesticide free vegetables in the limited spaces they have. Also, citizens are being helped in recycling kitchen waste as manure for their gardens… However limited in scale these efforts may be, we hope Bangalore city will [set] new benchmarks in growing and consuming healthy foods [and] keeping [the] environment clean, indirectly contributing [to] reducing ‘food miles’ and thereby [the] negative impact on [the] environment too.’

To that end, 11 professionals have come together and invested in 17 acres of land outside Bangalore in a community farming experiment. For this set of weekend farmers—again, all infotech professionals— the success of their investment lies in the fact that they have just harvested their first crop of toor daal and ragi, all organically grown.

“Community farming is here to stay,” says Vishwanath emphatically, even as he gets ready for another workshop in the garden city.