The lives of people who live higher than most people 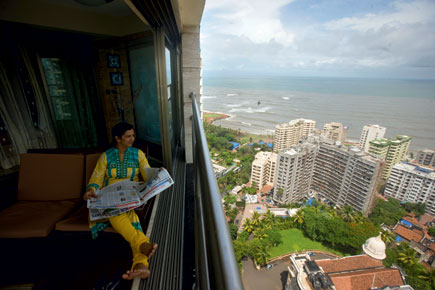 The lives of people who live higher than most people


Right at the end of Dubash Lane, a narrow stretch of tarmac that climbs a hillock off Mumbai’s posh Nepean Sea Road, stands a building so tall that looking up to count its storeys is dangerous. You will either be blinded by the sun or fall backwards. The building in question, in this quiet neighbourhood of bungalows and villas, is Tytan. At 110 metres, it is among the tallest residential buildings in the city. Add the hillock, and it’s a building you could forgive Jack for assuming to be his beanstalk.

On the 23rd floor of Tytan—which, like other high-rises in the city, does not count the extra fire-refuge floor every seven floors—50-year-old Siraj Kapasi stands in a part of his three-bedroom

flat that is too large to be called a balcony, too small to be termed a terrace. From here, the view is spellbinding. To Kapasi’s left is the Arabian Sea, sloshing against the rocks. To his right, stretched out towards the north, is the rest of the city. You can see how the sea hugs Mumbai, right from Marine Drive and Chowpatty all the way north to Juhu Beach.

Kapasi then points towards Antilla, which looms in the distance. Like an elder talking fondly about grown-ups he’d once seen as kids in shorts, he says, “It grew up in front of my eyes.”

Before the economic slowdown, Mumbai experienced a construction boom that saw the rise of several audacious buildings. With very little space available to expand horizontally, these buildings arose vertically. Mumbai has always been considered India’s high-rise capital, and buildings with forty-odd floors no longer raise eyebrows. And come 2014, the world’s tallest residential building is expected to be ready for people to move in. World One, under construction in Worli, will be 442 metres in height, with a total of 117 floors.

Expectedly, living in such towers is not the same as living in moderately-sized buildings. Life on the upper floors has its own share of pleasures, privileges and surprises.

“You know, I hear strange noises up here,” says Kapasi, who runs a chain of CA coaching institutes in South Mumbai. “It is not the usual sounds off the street, but sharp, distinct sounds, as if something’s happening next door.” Often, these are sounds from the street. But the thing with sound is that it floats upwards. Without any tall buildings around to cut off the noise, the Kapasis hear everything as if it’s happening next door—from  a Ganapati visarjan procession in Chowpatty to cars zipping by on roads below to someone raising his voice in a nearby building. The Kapasi family even claims to have heard the gunshots and bomb explosions of 26/11, although Colaba, Chhatrapati Shivaji Terminus and Marine Drive, where the terror attacks took place, are quite far from Tytan.

In these high-rise buildings with vertiginous views, where your ears pop in elevators and your cellphone reads ‘No Signal Available’ (most telecom towers are erected on shorter buildings), one must also get used to strong winds and pigeon visits.

Kaizad Mistry, general manager of SP Corporation, a chartered accountancy firm, lives on the top floor of the 32-storey Lloyd Estate in Wadala. While his windows offer a spectacular view of the Bandra-Worli Sea Link, they also attract pigeons. Mistry has boarded them up with nets to keep the birds away. “I suppose pigeons are everywhere,” he says, “But here on top, there are so many and they are such a nuisance.”

And there are the winds. Even though Mistry has installed much heavier sliding windows on his 32nd floor apartment than he had at his 12th floor flat in the same building, where he lived before moving to the top floor, they still rattle at night. He finds his senses besieged in other ways as well. Every morning, he is woken up by prayer calls from nearby mosques. And often, a thick toxic smell of ammonia from the nearby Rashtriya Chemical & Fertilisers (RCF) plant envelops the top floors of the building for hours.

Saleem Husain, a US citizen who works as a director of Citigroup in Mumbai, lives on the 40th floor of Imperial Heights in Goregaon, a building where actor Salman Khan is rumoured to have bought a flat. “When you are like 36 or 37 stories up,” says Husain, “the air pressure changes, and you end up having to import a lot of equipment. If something breaks, it’s really hard to replace locally. The windowpanes are imported from Germany, which sounds really cool, except that if one of them breaks, then I’m without a window [for a while].”

Husain moved to Imperial Heights six months ago. Before that, he lived near Juhu Beach. His wife had developed asthma, and they wanted to move to an apartment where the air would be cleaner. In his present location, the air is indeed better, and the view, outrageously good. One can see Malad, Sanjay Gandhi National Park and the rest of Borivali, right up to the Global Vipassana Pagoda’s dome in Gorai.

But the view comes at a cost. According to Husain, flats in his building sell for around Rs 15,000 per sq ft. “But for each floor above, the price rises by Rs 100 per sq ft. Which basically means that if you go 40 stories higher, you pay Rs 4,000 more for every square foot,” he says. Fellow Mumbai resident Satyaprakash Shimoga, an associate director of a top real estate consultancy firm based in the US, says this is the price you pay for living up in the clouds. “Not only are flats higher up more expensive,” he says, “even the maintenance charges go up.”

Skyscraper homes can transform the lives of their occupants in subtle ways too. Says Mistry, “Where I grew up (the Parsi neighbourhood of Captain Colony in the Haji Ali area), I would stop by at least five times to chat with various people from the area before going home. Here (in Lloyd Estate), I go straight home. That’s the nature of high-rises—they are isolated from the rest of society. Not that I’m complaining.”

Husain believes that the emergence of skyscrapers is transforming Mumbai itself. Increasingly, well-paid professionals are opting to live in posh towers that have sprung up in locations that were unfancied till recently. Says Husain, “South Mumbai increasingly resembles Central London—high prestige properties, but where people like me, bankers who need to get to work in the morning, aren’t going to live anymore.” Central Mumbai, where a lot of mill land is available for construction, is nothing like it was once. Dowdy neighbourhoods are smartening up with snazzy fast-food outlets and suchlike to conform to the tastes of the high-rise middle-class. However, adds Husain, what makes South Mumbai stand apart is its architectural heritage. He points to a neighbouring building and says, “This building here, I don’t expect it to grow in any character. It might grow in value, but character doesn’t come overnight.”

Shimoga himself lives in a high-rise, on the 23rd floor of a 27-storey building in Thane, Mumbai’s northeastern suburb. Under current rules, developers cannot build any higher in Thane district. But going by the cluster of high-rises coming up right outside Shimoga’s window, enough builders seem keen to get as close to the limit as they can. The 38-year-old moved to this apartment late last year, after having lived in a ground floor apartment in Kandivali for many years. “The traffic there was terrible,” he says. “The house had poor ventilation, was humid and stuffy. But my father did not want to move here. [But now…] just look at the view,” he says. Apart from concrete frames, you can see Yeoor Hills on one side and Thane Creek on the other. Shimoga’s father was afraid of moving into such a tall building, and while he reluctantly did, he still occasionally grumbles about how unsafe these heights are.

Despite the problems, despite what his ears and nose are often subject to, Mistry likes living in a high-rise. There is, however, one convenience he misses of his previous home. Back in their Captain Colony building, they lived on the first floor. “Every time I left my wallet home, I would call out from below. My mother would put the wallet in a polythene bag and lower it down to me by means of a rope,” he says, “Now, I have to take the lift 32 floors up.”