The Twain Do Not Meat

Tandoori versus asado. To visiting Argentinean polo players, taken out for lunch by Open, it’s a no-contest 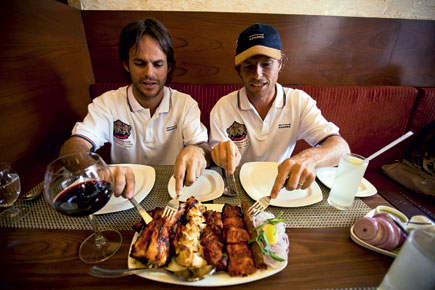 Tandoori versus asado. To visiting Argentinean polo players, taken out for lunch by Open, it’s a no-contest


Football is not Argentina’s only obsession. There is another contender: asado, beef slow-barbecued on a parilla (grill). It is usually beef, though it could be some other meat as well. Asado refers to the cooking technique, a technique hugely popular in South America but associated most closely with the land of the blue-striped footballers.

Argentineans are fiercely proud of everything about their beef, right from the way the cows are fed and reared to the way the meat is prepared. Till recently, they were the world’s biggest beefivores, the country’s per capita consumption being over 70 kg a year. A sharp rise in prices has brought that figure down to 56 kg, and Uruguayans have recently stolen a march over their neighbours in this matter of national importance. Such is the power of beef in Argentina that, last April, when its economy was reeling under high inflation and presidential elections were just six months away, President Cristina Fernández de Kirchner couldn’t come up with a better sop than ‘Carne para todos’. Roughly translated as ‘Meat for all’, this programme had trucks plying across the country to sell around 10,000 kg of different beef cuts at heavily discounted prices.

I had a brush with this facet of Argentinean life, of which I had only read about, on a recent afternoon while trying to get an interview with a visiting polo team from that country. The four players belonged to a polo club named La Campana and were in Mumbai to play against a local team for the Yes Bank International Polo Cup. I wanted to take one of them out for an Indian barbecue, so I could write an account of it. But no one seemed enthused. The Argentinean public relations team provided a variety of reasons for this, from “separating before a match can harm team spirit” to “the weather is too hot” and even  “they don’t eat lunch”.

After some persuasion, two members of the team finally succumbed to my offer and came down from their rooms at the Four Seasons Hotel to meet me in the lobby. While they couldn’t have been more apart physically—one wasn’t taller than five feet five inches, the other towered at six feet—they had many similarities. Both were 39, owned ranches with 25 horses each, and wore identical clothes (white T-shirts and dirty white training trousers).

Marcelo Araya, the shorter one and also the team’s captain, addressed me first. “I’ll be honest, I would love to come. But I am afraid your food might not be up to our standards.” This was a dig at Indian cuisine and a boast about their own, but I was ready to swing a mallet on behalf of Indian chefs. They cut me short every time I said something, until I reminded them it was going to be a tandoori lunch, tandoori being “Indian barbecue”.

The word ‘barbecue’ worked like magic. Suddenly, the mood lifted. A flurry of questions followed, and I realised I was the one now being interviewed. “An Indian barbecue, really? How come nobody told me about it? Like an asado?” Araya kept asking. Seizing the opportunity, I said, “It’s not just like an asado, it’s better.” Araya was visibly excited, and so was the taller Nicolas Mackinnon.

We got a taxi for the short ride to Copper Chimney restaurant at the nearby Phoenix Mills commercial complex. As the restaurant sign glittered in the afternoon sun, adding sizzle to our barbecue dreams, Mackinnon said, “A fancy restaurant, eh?” He felt underdressed. Araya, in contrast, was far less hesitant. As soon as he’d seated himself, “Get us our asados!” he yelled across the restaurant to the waiter farthest away. By this, I explained to the bewildered waiter, he meant he wanted the menu.

They might have been in an unfamiliar setting, but their spirits were high. And mischievous. They even asked the waiter if he had any Argentinean wine. Once the proffered bottle of wine appeared, Mackinnon had a question.

“Now, why would I come to India to try out Argentinean wine?” he asked, and sent the wine back.

Araya and Mackinnon, both of whom are from Buenos Aires, admitted that for a week since they had arrived in Mumbai, they had had nothing to eat except pizzas for lunch and McDonald’s burgers for dinner. The restaurants they’d visited had plenty of international food choice, but none of it was served with beef, which rendered the food “unsuitable”. Pizzas and burgers, on the other hand, didn’t necessarily have to contain beef. “But beef would be better,” Mackinnon added, “We were so glad to see a McDonald’s. Otherwise, it would have been only cheese pizzas [for us].”

And then the menus came and they fell into a perplexed silence, as though they were students who’d just been handed a tough examination paper. They seemed to remember something, and summoned a waiter. But neither the waiter nor I was able to explain which of the ‘Indian asados’ on the menu came with ‘chimichurri’. I learnt later that the article in question was a popular South American sauce used as an asado accompaniment.

Unable to decide which kababs they might like best, I said, “Why not try all of them?”  We ordered chicken tikkas, chicken malai kababs, mutton seekh kababs and machchi kababs along with tandoori rotis.

As we waited for the food, their conversation focused on asado. “We apply salt to our asado and barbecue it slowly for a long period. We use different meats, but beef is the most popular. No beef is tastier than Argentinean beef,” Araya said. This is because Argentinean cows are happily reared on comfortable ranches and graze on the grass of the Pampas, he explained, unlike cows in other countries that are cooped up in feedlots and fed grain.

Araya and Mackinnon continued to educate me on asado. There are two types: a la parilla, in which pieces of meat are roasted on a grill, and a la asador, where entire carcasses of animals are splayed on metal crosses called asadores and exposed to a fire pit. Both styles are always accompanied by conversation.

Mackinnon, whose father was a renowned asado-maker in his locality, says, “The asado isn’t just a barbecue, it’s a way of life.” Not surprisingly, he first met his wife over an asado prepared by his friends. Today, he is a father of three sons—aged 11, nine, and six. “My eldest will prepare his first asado when I get back,” he said.

When the food arrived, the two were struck silent again. But this time, they looked like students who had been cheated of their marks. They tasted and rejected an assortment of food, until they got to the machchi kababs and tandoori rotis. They left the rest of the food almost untouched. “So, this is better than an asado?” asked Mackinnon sardonically.

I met Mackinnon later in the parking lot of the Mahalaxmi Racecourse. They had just completed a practice match with a local polo club, and, despite their fancied reputation, had lost. The area was dotted with BMWs and Mercedes’ and pretty women in large hats. I asked Mackinnon the reason for their loss.

“Our lunch did not go down too well,” he said.