A bunch of social networkers on the web have kept tabs on Michael Jordan’s outfits, the late Kim Jong Il’s postures and other such absurdities to hilarious effect 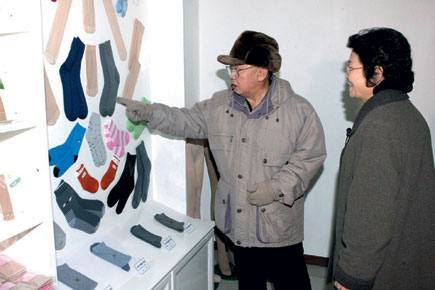 
Michael Jordan, one of the preeminent athletes of his generation, has, on his last two birthdays, received a bizarre tribute. On 17 February 2012, followers of the Tumblr account, wtfismikewearing.tumblr.com, caught a glimpse of the retired basketball legend with his head in his hands, wearing a gold pinstriped suit jacket, two feminine beaded bracelets, vomit green slacks, and a pair of garish two-toned loafers. Jordan’s expression calls to mind intense feelings of disgrace and humiliation. The mocking headline reads, ‘Exactly.’ The sub-heading belies a somewhat more affectionate motive: ‘Happy birthday, Mike.’

Aaron Horton, a 28-year-old African American web producer from Philadelphia, created wtfismikewearing.tumblr.com after watching an American playoff football game with his buddies. Jordan came up in conversation and Horton chimed in with a few jokes about His Airness’ fashion sense. The room shook with laughter. It was one of those things: an unspoken crumb of universal truth, a tiny untouched nerve, some speck plucked from the comedic zeitgeist. In the late 90s, it might have become a forgettable throwaway line on a late night comedy show. But after the game (and a few drinks), Horton took to Tumblr to demonstrate the truth of his claim.

“‘What the fuck is Michael Jordan wearing?’” was the question I assumed everyone [asked] themselves whenever they saw Mike in public,” Horton tells me. “So, I just rolled with it.”

Tumblr, the increasingly popular micro-blogging and social media site, famous for its rich textured, photo-heavy content, has unintentionally opened the door to a new corridor of global pop-cultural comedy, based on blunt repetition, hyperbolic literalism and the manifestation of unspoken cultural jokes like Michael Jordan’s taste in toilet-white loafers. Tumblr pages like faceobok.tumblr.com (read that name again slowly)—which re-contextualises the marred grammar, putrid spelling and general vapidity of Facebook groups, likes and listings through screen captures—have mushroomed as Tumblr has swelled in usage. (One captured Faceobok post is from a ‘like’ page that reads: ‘Meating the perfect person then losing them.’)

Other comedic Tumblr accounts border on the surreal. The account samepicofdavecoulier.tumblr.com, aka The Same Picture of Dave Coulier Every Day, lives up to its name, having posted the very same picture of forgotten comedian (and former star of the American sitcom Full House), Dave Coulier, clad in a retro hallucinogenic clashing red sweater, once a day, every single day since 21 November 2011. It can either be seen as a comment on the power of pop-cultural memory or the vapidity of the internet landscape. And depending on your mood, it can either make you chuckle or cry.

One of the most famous, and arguably effective, satirical Tumblr accounts is, of course, kimjongillookingatthings.tumblr.com. For the few who haven’t seen it by now, the account posts pictures of the late North Korean dictator Kim Jong Il, looking at things. The satire is as gentle as it is devastating: Kim, inevitably surrounded by fawning associates, looks at things as mundane as rice or sweaters, as if to give his holy approval to them. A distrust of power is palpable in the repetitive placement of dumb-faced images of Kim, who, as per state text books, didn’t ‘produce urine or faeces’ like mere mortals. The site, long before Kim’s death, became a cultural phenomenon. But on 19 December 2011, a matter of hours after Kim’s death went public, a Facebook page honouring the Tumblr posted ‘Here’s looking at you, Kim’, and received 3,000+ likes and 350+ shares. The allure of looking at Kim Jong Il looking at things, it would seem, grew stronger after death.

The man behind kimjongillookingatthings.tumblr.com is João Rocha, a self-described “normal 27-year-old” art director working for ad agency Young & Rubicam in Lisbon, Portugal. He started the account after seeing images of the dictator online. “I saw a gallery about Kim Jong-Il in The Boston Globe and it was a surreal experience. I couldn’t believe that this was actual propaganda. The rest is history. It took me a while to [get it started] because I had to make sure enough photos existed,” Rocha says.

Rocha has no other connection to Kim Jong Il or North Korea. But for many, he has irrevocably shaped their impressions of the dictator. Some visitors even mistake him for the man himself. “I get a lot of emails from all around the world, but the strangest ones are of people who believe they are either talking to someone in North Korea or the [actual] Kim Jong-Il,” Rocha says.

After Kim’s death, the page kimjongunlookingat things.tumblr.com, with the same visual scheme but dissecting the authoritarian poses of Kim’s son and successor, seemed like a natural sequel to fans of the original. News flash: Rocha has nothing to do with it. “I’m not doing any search on Kim Jong-Un. First, because the Tumblr [domain] has already been registered. Also because I don’t think it works as well. I started the blog, but there are not as many [pictures] of his son.”

The sequel is actually run by a 38-year-old system administrator and ‘information addict’ named Jason Timmons in Chicago, Illinois. “I had been a fan of the KJI Looking at Things site almost since its inception,” Timmons says. “On the night of 18 December, I was at work, browsing the web [when] headlines of the Dear Leader’s death hit the news sites. For once, I was first to the buzzer on this internet thing.”

Timmons has never spoken with Rocha about his idea, but is curious about what he has to say. “I’d be happy to hear his thoughts. Although I read in an interview that he felt [Kim Jong-Un] was not as effective. He may be right, time will tell. The responsibility is partly Kim Jong-Un’s, after all, and I think he’s taken to his new tasks admirably,” he says.

It seems that in the visceral and fleeting world of internet comedy, your joke is only as strong as the speed with which you capitalise on it. And capitalising on the joke is part of the allure of creation. The cult-inspiring page garfieldminusgarfield.net, a similarly repetitive humour site featuring actual Garfield comic strips with the feline character removed to absurd effect, resulted in a book deal for its creator, Ireland-based technology manager Dan Walsh. However, for Danielle Owens-Reid, the creator of lesbianswholooklikejustinbieber.net, capitalising meant something entirely different.

Danielle’s Tumblr became a hit in 2010 by snatching a joke from the Western pop-cultural unconscious mind: Justin Bieber’s trademark boy-bangs, when worn by young women, is part of a classic lesbian look in the West. It’s a look that could easily describe Owens-Reid herself. Her page also came off as a provocative comment on the oft-androgynous nature of heavily marketed young stars like Bieber. But Owens has since used her 15 minutes of fame for a good cause.  She used the traffic to redirect visitors to a new site she helped create called everyoneisgay.com to help gay teens come out and accept their sexuality in hostile environments.

“I got quite a number of comments from girls who thought I was stereotyping the lesbian community. I had just met Kristin [co-founder of everyoneisgay.com] a few month’s prior and we started a [new] Tumblr to talk back to these folks,” she explains. It’s hard to imagine culturally coded internet comedy becoming a source for emotional and personal healing, but good satire sometimes touches off painful emotions. “I grew up in [a conservative environment in] Charleston, South Carolina. We get a lot of questions from [gay] youths who feel like they’re the only people who are struggling. I think it’s nice for them to see me, a little girl from [a small town] who is [grown up] and gay and okay with it.”

For Aaron Horton, however, the power of Tumblr goes no deeper than seeing Michael Jordan wearing a key-lime pie coloured blazer, an untucked white shirt, and a pair of disturbingly baggy, tube-shaped jeans. “I think people find it funny simply because of how badly he dresses. Michael Jordan is a man who just turned 49, so I don’t think anyone expects him to dress like he’s single and in his forties or thirties. But he’s gone beyond just being out of touch. He definitely has a distinct style that consists of items that he repeatedly wears, and wears confidently. For example, his staples are: torn baggy jeans, bright sweater vests with huge button-down shirts hanging underneath, ridiculous hats, awful suits and weird boots,” Horton explains. “Tumblr is perfect for humour because it’s so visual and quick. Posts are easy to re-blog. And obviously, since it’s [user-friendly], creators don’t need much technical proficiency to share funny stuff with the world.”

All you really need to do is find the unspoken joke, and then repeat it—ad infinitum.