The Relocation of Shiva 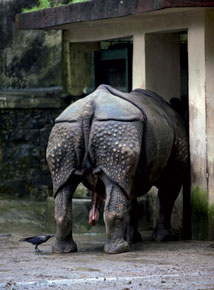 
On a rainy Wednesday morning, a ramshackle Premier Padmini taxi enters Veermata Jijabai Bhonsle Zoo in Byculla, Mumbai. The cab is a mess. Its doors creak, the paint is wearing off and its engine often sputters to a halt. But what is of particular interest is the vehicle’s cargo: heaps of sugarcane on the carrier above and large bundles of leaves and bananas on the seats beside and behind the driver.

Like every Wednesday, the zoo is closed to outsiders. But old men in white sneakers and young lovers have sneaked in for a walk. The cab moves through these groups of morning strollers, struggling under the weight of its load, and disappears into one of the zoo’s many gravel lanes.

What the taxi is carrying is a day’s feed for Shiva, the zoo’s only rhinoceros. Shiva is soon to leave Mumbai for Delhi Zoo, where two suitable mates have been found for him. They are Magesgwari and her daughter Anjuka. Magesgwari, 18, lost her male companion, Raja, eight years ago. But how does one drive a truck 1,400 km on a highway, a journey of at least four days, carrying a 2,500 kg rhino?

Shiva is a large grown-up rhinoceros of about 34 years. That is old for rhinos, who usually live up to 40 or 45. He’s even larger than he seems in photographs. He is also slothful. He walks dragging his feet, as though he’d rather not perform the Herculean task of lifting his limbs. His keepers claim that Shiva can charge at a target when he is in the mood, but this seems implausible.

Shiva was brought to the zoo in 1985, when he was six, from a zoo in Guwahati. Since then, zoo authorities have been looking to have him mated but have proven unsuccessful. Most female rhinos in other zoos already had a male companion, or their authorities refused to part with them citing the Mumbai zoo’s poor record of animal upkeep.

In 2005, Ranchi Zoo had a single female rhino available and a decision was taken to send Shiva there. It took three days of effort before Shiva budged—or allowed himself to be. His cage was lifted by a crane onto a lorry. But a group of Maharashtra Navnirman Sena (MNS) workers appeared, claiming the rhino as a symbol of the state’s pride and saying they would not allow his transfer. The plan had to be shelved.

In the years that followed, a new story started making the rounds that Shiva would be shipped to a Thailand zoo. It did not happen. He was left to cut a lonely if bulky figure as the sole occupant of his zoo enclosure. Twice, he developed a murderous fit, resulting in human fatalities. Once he kicked and gored his keeper. On another occasion, a visitor’s shoe fell in the rhino’s enclosure. On entering it to retrieve the shoe, this man suffered the same fate as the keeper. Shiva’s veterinarians say that the absence of a mate could explain such aggression.

Now that Shiva is at an advanced age, zoo authorities are trying to have him mated once again. “We don’t know what will happen. We don’t even know if he’d be in the mood to mate,” says Dr Sanjay Tripathi, the zoo’s veterinary officer, speaking a day before the animal is to be moved.

This morning, five keepers are tending to Shiva’s enclosure. One shoos away crows perching on the rhino. Three others clean up the cage adjoining the enclosure. And one more is just around to supply stories of the rhino. The zoo’s director, Anil Anjankar, has already apprised the media of how momentous the proceedings are going to be. Journalists, photographers and cameramen keep showing up throughout the morning. At some point, the director makes an appearance. Wearing a crisp white shirt, his hair neatly parted at the side, he rehearses his answers before answering actual questions on camera.

Minutes turn to hours. The rhino refuses to enter the cage, to which a trail of leaves has been laid from the enclosure. The animal refuses the lure. Leaves have also been placed inside the cage—11 feet in height and six feet in breadth and width—to trick him into seeing it as an extension of the enclosure. There are also sugarcane rods and bananas to entice him. But the rhino doesn’t oblige. He just roams around the enclosure, marking his territory by shooting powerful jets of urine. Jokes on urinary incontinence are cracked. Later, when two crows start picking on his nether regions, a large elephant trunk-like phallus descends—almost to the ground. Jokes follow on his state of arousal.

The cage is covered with plywood on all sides. At times, the rhino places one foot into the cage but takes it off at the sound of a plywood creak. On another occasion, he half enters the cage. Two men suddenly jolt into position to shut the cage’s gate. Shiva’s keepers cheer him on. Television journalists train their cameras on him for the grand entry. But the rhino simply turns around.

More food is placed in the cage. The water level in his enclosure, where he likes to laze around, is lowered. A veterinarian produces an injection. Its content is shot into bananas that he is fed through the grills. People ask if he is being sedated. But these only turn out to be medicines for a wound he has on his horn, inflicted by a nasty rub against a wall. “If we sedate him, how do we carry him?” the vet asks and laughs at her own joke. Even if they did manage to tranquilise and get him into the cage, the stress could possibly incite violent behaviour once it wakes up.

By the time the Delhi Zoo team reaches Byculla, most journalists have left. The team, which specialises in animal transport, is led by Dr Paanneer Selvam, a vet, and includes five Delhi Zoo employees. One of them says they have moved leopards, tigers and deer, among other animals, from various Indian zoos to Delhi.

Dr Selvam, who has a habit of punching his chin in contemplation, intervenes to say something. “But,” he says and pauses, punching himself harder, “never a rhino.”

Two vehicles are to be used for this transfer to Delhi. Four people will travel in a truck with the rhino, while Dr Selvam and a driver accompany it in a Toyota Innova. The journey will take at least four days, since the truck must be driven at a speed no more than 50 kmph, lest Shiva suffers motion stress, though rubber tyres will be placed under the cage as shock absorbers. The party has identified government guest houses along the route where they can put up for the night, leaving the rhino in its cage. However, in case they are unable to make these destinations, they say they will have to make do with roadside hotels. Zoos along the route have also been alerted of the plan, in case they need help. Some food for the rhino will be taken along, some will be bought on the way, and some will be gathered on the spot by the group. One of the workers shows a cleaver with which they hope to chop grass on the way. Shiva, his keepers say, consumes 50-60 kg of food everyday.

As members of the Delhi team discuss the plan with their Mumbai counterparts, there is an air of a wedding under preparation. Dr Selvam, who has overheard Dr Tripathi expressing worry over whether Shiva will adjust to life in Delhi Zoo, has father-in-lawish words of reassurance. “Don’t worry,” he says, “We will take care of him. He will be one of us now.” It’s comical, but they all mean what they say.

If this is an arranged marriage, then the matchmakers are at India’s Central Zoo Authority (CZA). Anjankar, who claims he had given up hope of Shiva’s ever finding a mate, says he received a notice from the CZA a few days ago asking for Shiva’s transfer to Delhi Zoo, which was in search of a male mate.

For all the jokes about Shiva’s arousal earlier in the day, he seems reluctant to act in his own sexual interest. As day turns into evening, he obstinately stays away from the cage.

The next day, the same routine is followed, but Shiva still does not budge. Friday too passes by. By Saturday, Dr Selvam is jittery. It has taken longer than expected and some of his men have asked if they should give up and return.

“Rhinos are temperamental animals,” says Dr Selvam, “It depends on their mood. We have to be patient.”

On Saturday, apart from leaves and other food, the cage is also smeared with Shiva’s dung. Zoo authorities have done this so that Shiva is tricked into thinking of this space as just another part of his enclosure. But apart from the occasional one step, the rhino keeps away.

On Sunday morning, a zookeeper notices that the rhino is lurking around the cage. Messages are sent to the other keepers. For almost a hundred hours now, his keepers have been reducing food availability in his enclosure and stacking it instead in the cage. Hunger, they hope, will eventually draw him in.

At around 11 am, the rhino enters the cage. Everyone is relieved and ready. Once Shiva senses the gates shutting behind him, he throws a fit of anger that lasts a few minutes. He kicks a water trough in the cage, but then appears to calm down. A crane that has been on standby since Wednesday is summoned. The cage is lifted and placed on the truck at around 1 pm. By 4 pm, the two vehicles depart for Delhi.

By Monday noon, the two vehicles have trundled past Baroda. They had to halt for the night at a highway hotel near the Maharashtra-Gujarat border. Over the phone, Dr Selvam says the hotel manager asked what they had in the truck. When he was told it was a rhino, the manager apparently replied, “Haan, aur aapke room mein haathi hai (Yes, and there’s an elephant in your room),” Dr Selvam recounts animatedly. “The journey has been smooth so far. Shiva doesn’t appear stressed. He is eating and drinking normally. We should be in Delhi by…”—he pauses, perhaps for a few chin punches—“…day after morning.”