Giving up isn’t always about losing. It takes a lot to kick a habit or a way of life. Meet five people who quit. And conquered 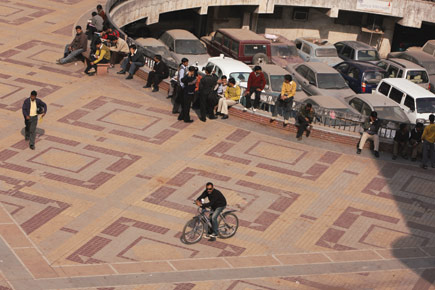 It takes a lot to kick a habit or a way of life. Meet five people who quit. And conquered


This is a story about a powerful decision. And five very different individuals who made that decision. Having played the same part, year after year, each decided to take a permanent break from being typecast. In real life, that is. The main character in each subplot that follows is a renegade with an imagination…and courage, of course. Abandoning belief systems such as violence, tradition, addiction, is no picnic. But each of them dared their personal histories to fashion a new present. It didn’t happen overnight. And it doesn’t mean life will be a happily-ever-after. But as one of them said, “I sleep better at night now.” Without further ado, over to the quitters

Driving drove Saha up the wall. He cycles to work now. Happily

Pradip Saha is routinely taken for a labourer by impatient drivers on the road. The abuses come quick and easy. Getting harassed by Delhi’s rabid honkers on a daily basis is guaranteed. But the Associate Director at New Delhi’s Centre for Science and Environment doesn’t miss his car. Not one bit. He cycles to work now. Saha likes to tell his tormentors: “Main cycle chalaata hoon, par gaali toh English mein deta hoon.” Saha considers cars to be polluting, fuel-guzzling prisons. And since last winter, his 18-gear Fire Fox bicycle has become his preferred mode of transport from his home in Saket to his office, barely 4 km away. But Delhi is a mean place for those of his ilk. Drivers, he says, tend to overlook cyclists, often running them right off the road. But Saha is unfazed by it. Rather, he cycles with a vengeance, insisting on going right in the middle of the road. That way, he says, you can’t be run off the road. And he refuses to be taken for a ride by car manufacturers who create “aspiration and promise traffic-defying speeds”, as he puts it. In fact, he has a counter suggestion: “This is a brilliant time for cycle manufacturers to turn cycling into a fashion statement.” Well, fashion statement or not, Saha definitely has one avid fan looking up to him as a role model: his 10-year-old son Ritwik.

His gun is silent, his aim is peace

A decade after turning his back on militancy, Shah video records weddings

Mohammad Latif Shah didn’t always shoot with a camera. He carried a rifle on his shoulder for most of the six years he spent in the jungles of Kashmir’s northern districts. Consumed by a cause when he was a teenager, he trained in Pakistan for three months. Latif became a Jammu & Kashmir Liberation Front militant at the height of the insurgency in the early 1990s. The former militant has an endearing way about him. He greets you with a warm ‘namaskar’. Ask him how he is and he always replies: “Aapki dua hai bas.” Cheerful he may be, but he cannot bring himself to talk about the brutality of his militancy days. “Aap sun nahin paayenge,” he says. His horror of living with violence is palpable in his repeated prayers for peace. “Dil toh ab bas aman chahta hai. Hum shaanti se rehna chahte hain. Khuda se humari yehi maang hai.” Over the last 10 years, Latif has not flinched from his steely resolve to lay down the gun. Yet, his government is still to make good its promise of a secure life for him and his family in Uri, along the Line of Control in the northern Kashmir district of Baramulla. Latif now earns a living by video-recording weddings and family functions. Money is short and work scarce. But for Latif, choosing the camera over the gun has meant that his world now depends on love and not war. And his struggle revolves around keeping it that way.

After 24 years of poaching animals, Mahamayan has now turned a conservator

V Mahamayan likes to live dangerously. Sandalwood smuggling and killing wild animals for their tusk, skin and meat, cultivating ganja (marijuana) and illicit brewing used to be his stock in trade. After 24 years of prowling the jungles for game, Mahayaman gave it all up. To become a protector. Today, he is chairman of the Vidiyal Eco-development Committee of the Periyar Tiger Reserve situated in the rain forests of Thekkady, Kerala. “Vidiyal means from dark to light,” he says, evidently proud of what he’s doing now. When he was a poacher, he couldn’t enjoy the simple pleasure of coming home to his family at night. He was always on the run. Today, he earns Rs 4000 a month, less than one-tenth of what he did earlier. “But I sleep well at night. And I am happy to be with my family,” says the father of two. In the past five years, the 45-year-old brigand-turned-protector has helped arrest 100 poachers. That makes him a prize catch for his one-time partners in crime. But for someone who has stared death in the eye countless times, life threats are no more than occupational hazards.

Dancing to her own tune

It’s not just dance, Phatak’s also defied the mother of all conventions—marriage

When Madhura Phatak performed at the University of Goettingen, Germany, in 1996, it was a case of art imitating life. Portraying a tradition-bound woman set free by the discovery of her own power, the Kathak dancer also broke free of the conventions of classical Kathak for the first time. It proved a turning point. However, it wasn’t for the first or last time the gold medalist from Jawaharlal Nehru University gave convention the go-by. In life, that is. She’d already decided to rebel against the mother of all conventions—marriage. When the proposals came, she found families didn’t accept a bahu who is a dancer. Being a cultural programme officer with the Embassy of Switzerland also meant late nights and socialising. Again, not welcome habits for a daughter-in-law. For someone from a traditional Brahmin family in Pune who has experienced Delhi’s suspicious landlords and judgmental neighbours first-hand, there is just no getting away from the everyday social fallout of rejecting marriage. But freedom is far more vital to her, she says. “After a long day of struggle with the outside world, I don’t want to come home to more conflict. Marriage is a gamble I don’t want to take,” says the award-winning dancer. A passionate advocate of love, Phatak says she wants a partner and a friend. “And when I get lonely, I dance.”

Stubbing it out of his life

A smoker for over 20 years, Mukherjee found it’s not that hard to kick the butt

Niladri Mukherjee likens a cigarette to a musical instrument. Giving it up, he says, is like unlearning to play the guitar. The comparison is almost poetic. But the 44-year-old product designer is surprisingly matter-of-fact about going from 44 cigarettes a day to none. “I was surprised it wasn’t that hard.” An unexpected level of modesty from someone who was at it for more than 20 years. Mukherjee realised it was time to change when he began losing weight, his energy levels sapped and attention spans got worse. He read up on nicotine addiction. He spoke to his doctor about neuro-receptor blockers—drugs that help smokers quit. Over the next three weeks, he was on the road to recovery. “You need to be mentally empowered to quit. It’s not a gutsy thing to do. There’s just too much hype around it,” he says. The nicotine addiction took him three days to get over. But the thought of not smoking was a lot more painful to accept. “The brain is hardwired to reach for a cigarette. Creating a new neural pathway took some practice,” he says. He discovered his mental picture of himself was with a cigarette, and he decided it was time to stub it out.