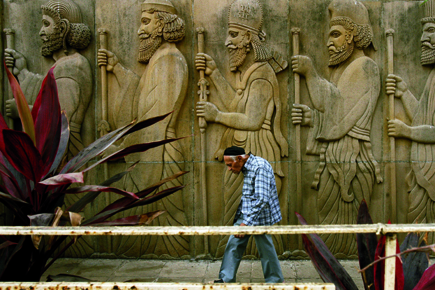 
It is a weekday and the sixth-floor office of On-lyne, an infotech company, is buzzing with activity. The sound of clackety keyboards and sight of paper-spewing printers fill the room. Employees sit at their desks, working on computers, answering phone calls and conferring with one another. Inside a large cabin at one end of the busy room, Yazdi Tantra switches his gaze back and forth between his laptop and desktop computer. One screen flickers with the blue of a Facebook page; the other has his email. Both have the same subject: ‘Parsi Family Tree’.

The silver-haired Tantra is a director of On-lyne and a Parsi himself. “We have to face it,” he says somewhat despondently, “We might not be around in another few years. Or just a handful of us will remain… Will [those who do] remember their past, their ancestors? Or will everything be just darkness?” Interest in one’s ancestry and concern for one’s legacy are human traits common to all, but perhaps far more pronounced in the case of a minority group threatened with the possibility of extinction. India’s Parsi community of Zoroastrians is almost certainly on that path. According to the 1941 Indian Census, there were 115,000 Parsis in India. In 2001, the count was only 69,601. This figure has probably dwindled in the decade since.

Over the years, Tantra has set up several websites for Parsis: Zorastrians.net offers community news; Parsidirectory.com is an online directory; Theparsiinstitutions.com lists all the institutions run and maintained by Parsis; and Themissingparsi.com puts long-lost Parsi friends and relatives back in touch.

Six months ago, he started an ambitious project. Through a website and Facebook page for The Parsi Family Tree, he aims to connect all Parsis through-out the world. The website Theparsifamily.commutree.com is open only to members of the community. They are invited to put up their genealogies and add to existing family trees on the site. Tantra wants to enable people to find common ancestors. He says, “Parsis are members of a small community. Many of them also happen to be distantly related to each other. This way, people can learn about their ancestors and also connect with each other.”

It is early days yet and there are 2,015 individuals currently listed as part of various family trees. Tantra himself had to seek the help of his mother and other elderly family members to trace their ancestry back five generations.

To popularise the website, Tantra has advertised the project in community newspapers and approached Parsis he is acquainted with to upload their family trees. While some readily agreed, others didn’t. “Many times they refuse me pointblank,” he says, “They often have unfounded fears that making information on their families public might harm them.”

A few months ago, on a visit to his son who lives in Las Vegas, Tantra learnt of a Parsi woman who had migrated to the US from Karachi. She had been collecting the genealogy of that port city’s Parsis— those who still lived there and also those who had moved to another country. Since 1992, she had amassed data on over 10,000 such Parsis, tracing some family lines seven, even nine generations back. She had devoted herself to that project after her father’s death, which was when she realised how little she knew about her ancestors. With word having gotten around, young Parsis had been contacting her for details of their ancestors; she was glad to oblige them with data.

However, when Tantra contacted her, she declined to share her database with him. “She has a treasure trove of information,” he says, “But when she was collecting information, she often convinced people by promising not to make any of it public without their consent. I’m in touch with her now and am trying to convince her to change her mind.”

Around 200 km north of Mumbai in the small Gujarati coastal town of Udvada lies the pilgrimage site of Atash Behram. According to a legend, when the first group of Zoroastrians reached India by ship between the eighth and 10th century CE, fleeing the Islamic invasion of Persia, they brought along the sacred flame of a fire temple. The Atash Behram temple houses that same flame, looked after by descendants of Udvada’s nine priestly families of the faith.

On a wall in one room of the Parsi heritage museum within the temple premises, those families are literally illustrated as nine trees, each branch and offshoot listing names of descendants. On seeing these on a visit two years ago, it struck Tantra that he could try doing this for the entire community. “Drawing upon the knowledge of community members and using the reach of the web,” he says, “I realised there was a realistic chance of attempting this.”

Next month, Tantra plans to visit Atash Behram again and request the priests for information on all the family trees they are aware of. “The Parsi community is one large jigsaw puzzle,” he says, “As I have progressed, I have learnt how each individual’s knowledge is like a stepping stone. One family leads to another, and before you know it, a genealogical archive seems to be shaping up.”

The Parsi Family Tree is currently a mishmash of a number of family trees. Many of them are tiny, with no more than three generations listed. Some, however, look astoundingly large. The Dadachanji family tree, for example, goes on for pages and pages, tracing about 814 family members over three centuries.

It starts with a certain Ervad Darab Ervad Chanji, and the ‘Darab’ and ‘Chanji’ may have turned into ‘Dadachanji’ down the years. So says Viraf Dadachanji, 71, the man who made this large family tree available to Tantra.

“After I sold my ancestral home in Navsari [near Surat, Gujarat] in 1979,” he says, “I held an auction to sell off all belongings in the house. When I was going through the unsold items, I found around seven or eight dusty old books. They were called Dadachanji Vanshavali and seemed to contain a record of my various ancestors. I chucked all of them and saved one, just in case I might want to take a peek at it in the future.”

A retired chartered accountant who lives in Vashi, Navi Mumbai, he got round to reading the book only after his retirement—almost 30 years after he found it. He discovered that it contained a total of 47 family trees within the Dadachanji line. The book traced the Dadachanji lineage for around 250 years, from the late 17th century right up to 1920, when the book was published. Small biographies and achievements of various Dadachanjis also found mention. Complied over a period of 27 years, the book had begun as a project of a family member named Ervad Jamaspji Edulji Dadachanji, who died midway through it, and was taken up by one Ervad Sohrab Pallonji Dadachanji.

“When I read the book, I realised what a fantastic piece of work it was,” says Dadachanji, “There were no computers, courier services or even good telephone services then. They had made house-to-house visits and double-checked details with records of donations at times of birth, marriages and deaths with local aagiaries (fire temples). Their effort would remain meaningless if someone did not update it. I decided to fill in the gap from 1920 to 2007.”

For the next whole year, Dadachanji devoted himself to finding others of his clan. He ruled out house-to-house visits since that would be too laborious. And since aagiary donations at births, marriages and deaths are now an irregular Parsi custom, with records likely to be sketchy, he dug his nose into MTNL phone directories and trawled through Parsi internet directories to find contact details.

Some responded coldly to his calls at first, but opened up once they identified common acquaintances. Parsi friends living abroad, through their own contacts or local phone directories, helped him locate other Dadachanjis. He spent long hours in newspaper offices and libraries, going through obituaries in old Parsi newspapers, swallowing dust and ink as he flipped through them with his fingers and saliva. “I was consumed with a maddening passion. My wife thought I had gone insane. I went through over 15,000 newspaper records. I think it even took a toll on my health,” he says in between laughs. “I consumed so much dust and so much ink that in the evenings when I would check my tongue, it would be black with newsprint.”

There were some disappointments, such as the loss of some well-kept newspapers in the Mumbai floods of 2006. He kept back-up copies of all the data he had mined, just in case, and managed to complete his project within a year. By the end of it, he believes, he had all Dadachanjis down. He then invested about Rs 35,000 to publish a number of leatherbound copies of the family tree for distribution to all members.

When he heard of Tantra’s project, Dadachanji gladly shared all his information with him. Tantra uploaded all of it onto the web and was so impressed by the elderly gentleman’s offline work that he kept a copy of the updated Dadachanji Vanshavali for himself.

Tantra's project is a work in progress. Every few days, he sees a new tree being formed or people updating their lists. He is pursuing many others who he knows maintain records of their family lines. One of them is Adil Patuck, director of Patuck Education Trust, which runs a few educational institutes in Mumbai.

Some 20 years ago, Patuck came across documents at home that listed all Patucks from 1765 to the early 1900s. He has been researching and updating that list ever since. He hasn’t, however, decided if he should let Tantra have the family tree. “When I collected the information, I promised I wouldn’t share it with others,” says Patuck, “I don’t know if it would be right to share it on a public platform like the web. I will have to contact those mentioned, or their family members, before handing over any details.”

Dadachanji, however, believes he did the right thing by sharing his book. Since it was published in 2008, he has been keeping notes of all family births and deaths in the hope that someone will take up the task of updates after him. The only person interested, a friend, is roughly as old as him. “I am worried there will be no one to take the book forward,” says the 71-year-old, “When I distributed copies of the updated book, many seemed grateful. But many were uninterested. When I explained the purpose of my effort, some even said, ‘So what do I do with it?’ Now with this new website, I know the work is safe. And in the future, someone can update the tree.”