What will happen when they are gone? A carcass dump in Bikaner, where feral dogs have become abundant, gives ominous notice 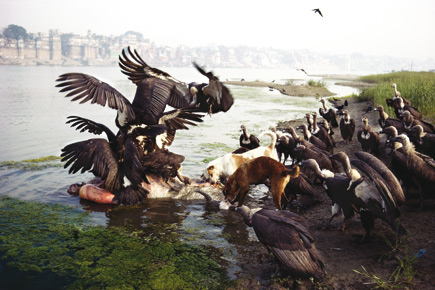 What will happen when they are gone? A carcass dump in Bikaner, where feral dogs have become abundant, gives ominous notice


At first, no one noticed they were missing. Vultures—gangly creatures seen with their heads buried in rotting flesh on roadsides, on the banks of the Ganga, lining the high walls and spires of every temple and tower—were once so ubiquitous in India as to be taken for granted, invisible in their abundance. Cross-culturally, they tend to be considered uncharismatic. Their pronounced brows make for permanent scowls and some have blunt beaks so strong they can splinter bone. In South Asia, their broad wings can reach upto eight feet tip to tip, casting a great shadow from above as they circle, drawn by the distant sight of carrion. Associated with death, we instinctually look away.

But for all of human history, vultures have served India faithfully. They scoured the countryside, clearing fields of dead cows and goats. They soared over the cities in search of the scattered refuse of the region’s ever-expanding populace. For a place where religious and cultural mores restrict the handling of the dead—human and animal alike, for both Hindus and Muslims—vultures served as a natural, efficient and underappreciated disposal system. On the Towers of Silence in Mumbai, they were an integral part of the death rites for Parsis, who lay out their dead for the vultures to consume in a ritual known as a ‘sky burial’. In Delhi, they flocked to city dumpsites: one photograph in the archives of the Bombay Natural History Society (BNHS), India’s largest and oldest wildlife conservation organisation, captures 6,000 vultures in a single frame; another shows 200 vultures on one animal carcass.

But, today, India’s vultures are virtually gone. The three dominant South Asian Gyps vultures—slender-billed, white-backed, and long-billed—started dying mysteriously in the 1990s; by 2003, scientists had isolated the cause. Vultures that ingest carcasses treated with diclofenac, a mild painkiller akin to such harmless curatives as aspirin and ibuprofen, develop untreatable kidney failure that kills them within weeks. Commonly used by humans worldwide for decades to control pain, Indians began using the drug on their livestock in the early 1990s. The effect on the vultures was immediate—dead birds literally falling from trees.

The Indian government banned the sale of diclofenac for veterinary purposes in 2006, but it was already too late. In less than ten years, vulture numbers had plummeted by 97-99 per cent. Scientists began using terms such as ‘functionally extinct’ and said they were ‘monitoring to extinction’. BNHS immediately set up captive breeding facilities, and the Parsis have settled on solar re.ectors directed at the bodies to speed up the process of decay, but a larger issue remains. Nature abhors a vacuum. With the vultures nearly gone, what has filled the ecological niche they once filled so seamlessly?

Dog attacks in India are on the rise. Two young girls survived an assault in the city of Bikaner in the Thar desert of western Rajasthan, but a four-year-old boy named Manjunath in Bangalore, for example, did not. One study figured that 70 per cent of the world’s rabies deaths occur in India, where there are more than 17 million dog bites every year. In the decade of major vulture decline, from 1992 to 2003, one estimate showed dog populations increasing by a third, up to nearly 30 million. The escalation of the dog population corresponds perfectly with the disappearance of India’s vultures.

Rameshewar lives at Jorbeer, a 100 yards from a five-acre pile of animal carcasses. When I met the lanky man, he was wearing a thin button-down shirt that had a neat tear in the back. He looked young, no older than 30, though his wife was already matronly with motherhood.

“I’ve been here four years,” Rameshewar said. “I live here with my wife and four children. These are my four goats, which we keep for milking. Tractors come every day carrying carcasses…”

The family lives at the edge of the carcass dump at Jorbeer on the outskirts of Bikaner. It is a convenient place for the city to bring its dead cows, water buffalo, goats and camels, and spots like this are appearing at the edge of every city and village in India, especially since the vultures no longer arrive to dispose of bodies in situ. Feral dogs come to feast.

Forest officials who live far from Jorbeer had insisted there was so much food provided by the daily delivery of carcasses that the dogs had no reason to be ‘mischievous’, that they had no reason to ever leave. Pandevi, who lived with the dogs, disagreed. For every ounce of Rameshewar’s leanness, his wife Pandevi was full and round. “Many go and roam, two-three kilometres from Jorbeer,” she said, her voice raspy.

“In the late night, I am very afraid of the dogs. If I have to go out at night for the toilet, I take a stick,” she said. “During the day, we carry a stone, but most of them know us and it’s usually okay.  But at night, and when they are in the mating season, they are different.”

“If… there is no one with our animals, and there have not been fresh carcasses, they will attack the goats,” Rameshewar added. “A few months ago, the dogs killed two of them.” I looked at the four remaining goats that hovered behind him as he gestured to a circle of thorny branches layered four feet thick that served as a corral for the livestock during the night.

“I’ve seen the number of birds go up,” he continued, “but I’ve also seen the dogs coming every day, more and more. In the morning, the dogs can get very restless when the new bodies come in. They’re hungry from the night. We have to fight them off as we unload.”

There are still birds, but none are as efficient as the vultures once were. Overhead, hundreds of birds kettled in slow circles in the sky—mostly Eurasian griffons, bulky steppe eagles and Egyptian vultures the size of large gulls—all riding the warm whorl of desert thermals to the top of the gyre without a single flap of their wide wings and then peeling off like a slowly cascading waterfall. The white-backed and long-billed hardest hit by diclofenac were noticeably absent. In the past six years, only one had been seen. As far as scientists can determine, diclofenac hasn’t affected these scavengers, but their eating habits are noticeably different from the Gyps vultures, which clean up in a way that dogs and other scavengers simply cannot. They are hyper-efficient in their jobs. After skinners strip the hide, whether at a dumpsite or on the agricultural lands that cover much of India, vultures can pick the skeleton perfectly clean so the bone collectors can gather their product for industrial use. The other scavenging birds prefer eyeballs and internal organs, leaving behind much of the meat, and they like to clasp bits in their beaks and fly off, messily scattering the remains and increasing disease risk. Dogs, too, leave much behind, making the task of the bone collectors, already unpleasant work, that much more difficult.

Vultures, by consuming the dead, often in places where they lie, also help contain diseases such as tuberculosis, brucellosis and foot-and-mouth by inactivating these pathogens, some of which can remain transmittable for months after a host organism’s death. A combination of strong stomach acids and body temperatures over a hundred degrees Fahrenheit mean vultures can even ingest an anthrax-infected carcass and suffer no ill effects. For the vultures to be unaffected by some of the most virulent diseases of our time, yet killed by a drug as innocuous as aspirin, is no small irony. The fear is that with vultures gone, and the human handling of dead livestock increasing, these diseases could spread among both animal and human populations.

But the most dangerous shift in the ecological landscape is that dogs have a proclivity for perceiving livestock, wild animals and small children as prey. The vultures, as necrophages, have no interest in the living, but dogs are hunters. They will scavenge, but their instincts are predatory, especially when the spirit of a pack possesses them. At Jorbeer, I watched them watch the wild gazelles that moved across the sand, saw their bodies lower into a crouch as they moved in pairs to circle around the ungulates, witnessed them as their pace quickened and the prey skittered away. A local veterinary clinic was treating several livestock animals every day for dog bites, and Rameshewar had already lost two of his goats. Then there were the two Bikaner girls, poor and unnamed, as locals told me the story of their attack.

Two days later, I returned to the dump with Jitu Solanki, a local biologist. He comes to the dump often to watch birds, and is comfortable around the dogs, but he was protective of me as we stepped out of his car. He was identifying the different birds we were seeing when the dogs, suddenly roused, started barking, herding in anticipation of something we couldn’t detect. He paused, mid-sentence, suddenly alert.

“Do you worry about the dogs?” I asked. He looked at me and said, “Yes.” He estimated that there were a thousand dogs at the site. “Dogs are a big problem. They are really too much,” he said. “A few months ago, they came with tractors and…” He makes a quick whistling sound and a universal scissoring gesture with his fingers to indicate fixing. “…and put ID tags on them, so maybe in two years it will work. But they never kill dogs here.

“Hindu people, you know,” he continued, “there is a lot of god and all. We have a god we call Bhairava, a reincarnation of Shiva, and his vehicle is a dog, so people believe that if you kill the dog, Bhairava will be angry. I like this concept.”

He looked up at the sky and continued, “In Hinduism, for every god you name, there is a related bird or animal; it’s a nice way to conserve wildlife. Take the vulture that people relate with death and don’t like—even this bird is the Hindu god Jatayu, who tried to save Sita when she was kidnapped. So even the ugly vulture has a place among the gods.”

There are optimistic indications that an increasing number of farmers are opting to use the vulture-safe drug meloxicam instead of illegally using the human form of diclofenac on their livestock. According to a recent study by the Royal Society for the Protection of Birds, use of diclofenac on livestock has declined by 50 per cent since pre-ban times. It is a ray of hope for the vultures of South Asia. If that number can drop to zero, the South Asian landscape can once again be safe for vultures.

Then, the offspring of BNHS’s breeding centre and natural remnant populations will hopefully serve as an avian seed bank that can repopulate India with the creatures humans neglected to notice until they disappeared. Should that happen, we might again look them in the eye, recognise Lord Jatayu, and appreciate the crucial function they silently serve. It might be the key to keeping vultures from disappearing permanently from South Asian skies.

(A version of this piece was originally published in the Virginia Quarterly Review, Spring 2011)