The Grown-Up World of Child Models

They are almost adults in their vanity and desire for fame 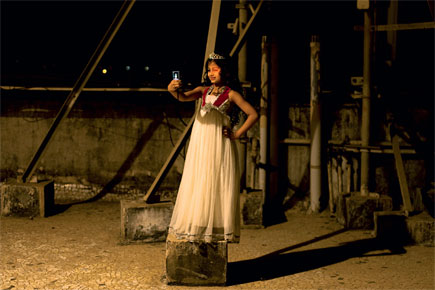 They are almost adults in their vanity and desire for fame


Muskaan Malik is propped on the sofa between her parents at her Mumbra home. Her hair is in place, her smile wide and untiring, and her answers cute and well prepared. As if on cue, she gets up, walks to the end of the room, and then walks towards you with one foot in front of another, gently swaying her hips and coyly giving you a grin. And then comes the introduction, “Hi guys, my name is Muskaan, I am seven years old, my contact number is 99675…” She then shows off her profile by turning to the left with a big smile, and then turning to the right.

Muskaan is a child model. She walked the ramp at the recently concluded India Kids Fashion Week in Mumbai. She has also appeared on the TV show Parichay and done a couple of print ads. During the Fashion Week, she worked a 12-hour night shift for the TV show, and then reached the fashion show venue well before time every morning, often falling asleep in her father’s car. She missed school too, but then that’s okay as she loves modelling. Ask her who taught her the ramp walk, and she says, “Mummy.” Mummy, Nilofer, is 27 years old and wanted to be a model herself. But a few garment print ads later, domesticity cut short her career. “And so when I heard people telling me that ‘Muskaan is so pretty’, I said ‘why not’. I now really want her to be a model.”

And a model, she certainly was—we spotted her backstage at the Fashion Week where she stood in front of a bunch of kids smiling at a cameraman. If he moved left, so did she, poking a few kids out of the way, and if he said ‘Cheese’, she obliged, shouting it back. With her hands on her hips, she was the star, and many others just stood there scowling at her as they couldn’t get past Muskaan.

At her Mumbra home, her mother is asking her to tell us her favourite things. “Gowns and Horlicks,” says the little child. Both parents are focusing on Mukaan’s career. They accompany her everywhere. Her two aunts and grandmom also look on adoringly, and one gets a feeling that everyone’s hopes of a better future lie with the curly haired child who seems to know exactly what she wants. “I know I want to be Katrina Kaif. When someone praises me, I feel very happy,” she says, before launching off with another performance as Gangu Bai, “Main Gangu Bai, Kolhapur se aayi, tere liye Coca-Cola laayee.”

Ask her if her friends know about her celebrity status, and she says, “Of course, and they all love me for it. I went for tuitions yesterday and was surrounded by everyone asking me details. Then I told them the whole process.” What if her best friend were to get the role she also auditioned for? The little diva has a Miss India answer lined up, “If I don’t get it today, I will get it tomorrow.” Her parents smile proudly, “She is a smart one and very good in studies too. We always tell her that God has something better planned for her if she doesn’t get a role.” Their plan includes more ramp shows and advertisements (because a 12-hour shift only pays Rs 2,500 while an ad could pay Rs 30,000 a day). And yet they insist they are not doing it because they want it, it’s all the seven-year-old’s own whim.

Muskaan presents us a newspaper clip of her posing on the ramp: “I model because mujhe bahut shauk hai. I love it.”

The crowd of kids gathered at the India Kids Fashion Week came from Delhi, Punjab, Indore and Nagpur, among other places. They were all there to look pretty and attract eyeballs, and they all seemed to know what to say, what to do and how to strike a pose. While some may have their parents to thank, most are aware of the perks of a modelling career. They preened for the cameras, flipped their hair on the ramps, and backstage watched their competition with attention, sometimes even elbowing them out during photo shoots. Some even meanly remarked to each other, “She isn’t as pretty as us. She can’t be in the picture.”

According to a spokesperson of a talent management company that handles many kids who walked at the Fashion Week, 60-70 kids land up at the firm’s office every month. Manisha Lakhe, an advertising professional turned author, is sure that’s because kids now know what the word ‘fame’ means. “They want people to know them. And they have become very manipulative—modelling also means less school. So it’s an easy way out.” Lakhe also knows that there is no easy answer to the question of whether kids should be allowed to model at such a young age. “It’s a Catch-22 situation,” she says, “If advertising exists, so does the need for child models. There is no really right way to do this. Most advertising agencies are professional and don’t mistreat or overwork the child. But parental ambitions are bigger than ever, and somebody is going to get exploited, whether we like it or not. Kids want to get famous as no one wants to work hard. Only when they get rejected do they start complaining. But that’s the nature of the field.”

Chantel Dias and her mother Cynthia say they know how to deal with rejection, and it doesn’t deter them at all. The offers that she doesn’t get weren’t that great to begin with, they tell themselves. Chantel is seven years old and a Zara fanatic. She loves dressing up and won’t step out of the house with her mother if she doesn’t approve of her clothes. “Mummy was wearing this red dress the other day and I told her that under no circumstances am I walking out with her. I also hate it if she puts on a lot of makeup. And we never walk out if we are wearing the same colours. Matching-matching is so like a school uniform.”

Chantel loves her hair and uses a special cream to keep her skin soft. She catwalks through the house and is often caught by her mother standing in front of the mirror practising Priyanka Chopra’s moves. She takes her own decisions— they only go for an audition if Chantel approves. She keeps a close watch on her weight. “She often comes to me if her jeans are tight,” says Cynthia, “and she is unhappy about it.” But like the other parents Open spoke to, Cynthia insists it wasn’t she who chose this field, but her daughter herself. Chantel tells you her favourite movie is Fashion, as if to prove her mother’s point. “When I walked out on the ramp the first time, people started screaming. It felt great. And anyway, I know I am the prettiest. I don’t look at other children, they look at me.” She recalls a girl from Singapore staring at her backstage. “She stared at me all through. I didn’t like her because she lookeds so different.”

Just when you think you are getting a glimpse of a child who likes or dislikes people and things by how familiar they seem, she goes into business mode. “I love shopping, but I only buy things if they are within our budget. Even at Zara, I look at price tags. I only choose ads I think will make it to TV. But I do know that I am still small, so I don’t wear makeup,” she smiles.

That may seem too wise a statement coming from a seven-year-old, but let’s face it, most child models seem to be tiny adults. At his post-show conference at the India Kids Fashion Week, designer Narendra Kumar said that he wanted kids to look like their fathers but cooler. Asked about kids growing up too fast, a major point of criticism, he seems to see nothing wrong in it. “A few years later, kids will be fashionable and ‘with it’ aged two,” he says, “We have to keep up.”

Internationally, for years there have been debates over ‘how young is too young’. Brooke Shields, who was 12 when she appeared heavily made up in the 1978 film Pretty Baby, was 14 when she first appeared on the cover of Vogue. Marc Jacobs uses kids to model his clothes, and even fashion house Miu Miu has used 14-year-olds. Soon after the French edition of Vogue carried pictures of a 10-year-old Thylane Loubry Blondeau—who appeared in a suggestive shoot with a low neckline, red lips and big hair—the photos were decried as ‘over-sexualized’ and ‘creepy’ by websites such as Jezebel. “This isn’t edgy. It’s inappropriate and creepy, and I never want to see a nine-year-old girl in high-heeled leopard print bedroom slippers ever again,” Chloe Angyal, editor of Feminsting.com, was quoted as saying.

Nisha Harale, who was the choreographer at the India Kids Fashion Week in Mumbai, says that the phenomenon can be controlled if there are guidelines set in place. “As a choreographer, I treated them as kids, and that’s why they appear innocent on stage. The aim was to not tell them where to stand or how to pose, but to let them be natural and themselves. Things can go wrong if we treat them as adults.” Recalling a chat with friends, who included a doctor, a business professional and an entertainment professional, she says that every person has a different take on this kind of precocity. “The doctor thinks it might make parents see their kids as sources of income, the businessperson thinks it robs children of their innocence, and the entertainment professional thinks that in this world of competition, it’s great to start young and learn fast. I agree with all of them. I just think if they are dealt with properly, they behave fine.”

Ghazal Sheikh, mother of five-year-old Fiona, says that she can’t really tell her daughter what to do. “I want her to do whatever she wants and I don’t want to say ‘no’. She loves modelling, dancing and showing off, and it’s great, because she is being herself. She reads magazines and wants the same dress and I buy it for her. Why not start young? I don’t see anything wrong in that.” Fiona, scowl- ing as her mother tries tying her hair, sees the Open camera and breaks into an instant smile. It’s an intuitive response, and her mother smiles at us, as if asking ‘Do you get it?’

Meanwhile, Khushi Mehta, 10, poses with lipgloss at her Vile Parle home, and says things like, “I want to be a model but also a doctor like Dr Manmohan Singh.” When we inform her that Dr Manmohan Singh is not a doctor ‘Dr’ of the sort she may be familiar with, she shoots back, “But he is known as one right? I also want to be known as one.” Her mother Vaishali clearly remembers the day Khushi decided to be a model. “We were walking in the market when she saw a billboard and said, ‘Mum, I want to be on that.’” At home too, she is the centre of attraction. Her grandparents, mother and friends surround her and look on with fond expressions. “Many of my friends accost me at school and say, ‘Walk kar ke dikhana.’ I always oblige, as I know they love me so much.”