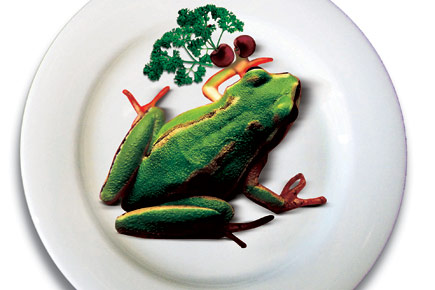 
In Goa, the summer offers Beaujolais months, of much exuberance and blurring reality. There is urrak, first distillate of cashew feni—that love-it-or-hate-it-drink—which enthralls a sizeable population of this sea-embroidered land. There is the peerless chouriço that goes with it, tiny tear-inducing bits of sausage.

Then the rains come—as they have now—making a minstrel of the dourest soul. Fields turn greener than in any imagination. Many fields threaten to temporarily become lakes, and some do. When the rain fades, in late afternoon or late evening, there is silence. You ask: Where the hell is that lot? Hoplobatrachus Tigerinus, and those other large, beady-eyed chaps, of the Hoplobatrachus Crassus?

Taken. Eaten. Captured at the point they come out to breed, show vocal prowess, and so, are unerring guides to their catchers.

The Indian Bullfrog and the Jerdon’s Bullfrog, mainly, along with the occasional and smaller Indian Pond Frog and Green Frog. This is a wholly illegal Goan frenzy, banned in 1985 by Wildlife (Protection) Act 1972. Taking up against this in any way, from catching to serving, can invite fines of Rs 25,000, and jail for up to three years.

At the no-names places along the slivers of road from Calangute to Mapusa, and other slivers elsewhere, they don’t give a flying ribbit about the law. Poachers—poor—and eaters—middle-class to millionaire—blithely ignore perdition by adopting a sleight of genus. I have—even last week—been offered dishes of ‘Jumping Chicken’.

My first monsoon in Goa, I had naively queried the name. A waiter had grumbled as he retreated, urging the patrao of the restaurant to deal with an ignorant bhailo—outsider—as I.

Since, I have been educated, though not indoctrinated. I can’t eat the stuff, endearingly called bebo, though I have been kind to a few acquaintances that do, and not sent them off to jail. Instead, I wave dissuading articles in their faces, outrage that sprouts like wild grass in local media over June and July; and claims that frogs are a gift to the environment. And they are. As a preventive, they are what quinine—and later, gin and tonic—was to the tropicalised Brit: frogs consume masses of mosquito larvae and the bloody insects themselves. I send friends and acquaintances links to frog-friendly websites and blogs, as I did of local eco-warrior Lilian D’Costa’s, who has shanghaied Tennyson to admonish: ‘Hold thou the good: define it well: For fear divine Philosophy should push beyond her mark, and be Procuress to the Lords of Hell.’

She and others also suggest: greater use of pesticides means greater build-up of toxin in frogs, passing it on to eaters to cause cancer, failed kidneys and strokes. Few buy it, in the face of inadequate statistics as to the physical danger of eating frogs; and snakes can’t talk.

Then, there is gentler persuasion. A few weeks ago, I collected some stickers that a local environment group, Wild Goa, gave out. ‘Save the Frogs,’ it urged. ‘They eat Bugs that Bug you.’

I gave a sticker to a neighbourhood thug, a government contractor who successfully masquerades as a restaurateur, providing for the wayward bureaucrat, municipal official, and procurers of various favours, porcupine meat, wild pig, and—“Jumping chicken, no?”

“You could go to jail,” I cautioned him.

“Fodeya,” he told me, with feeling—you don’t want to know what the word means. In a state where the powerful specialise in breaking the law—in land conversion; to attack police stations; to cut off fingers of critics—this illegal produce, like narcotics, is kosher.

He offered me, as have others over some years, a plateful of frog’s legs for Rs 400, done in any two of Goa’s touristy triumvirate of cuisine-art: garlic and butter; and masala. The third, rava-masala, evidently isn’t conducive to frog cooking. There is sometimes a fourth: buried in sour-hot ambot-teek curry, usually used with shark and shrimp. These lack the sophistication of those, say, in Kerala, who trade recipes of thavala, or frog, curry, carefully done with dashes of mustard seed, ginger, turmeric, chillies, garlic, onion, tomato and lemon juice.

It doesn’t grab me. When I see cooked frogs’ legs, remarkably like pygmy chicken, I’m reminded of desolate frogs in East Asia staring at prospective diners. But here, in Goa, there is at least a churn. Civic outrage combats a practice perpetuated by demand-and-supply: an impoverished Goan farmer or villager (there are such, even in this lofty paradise that wears denial as a cloak) earns between Rs 50 and 60 for a handsome specimen of frog—its legs. It leads to high commentary in local media. A pompous gentleman even suggested that, while eating frogs was a bad thing for the environment, preventing Goans from eating frogs amounted to an attack on cultural prerogative, as cherished as freedom of speech and livelihood, as it were. He then segued to that other Goan passion, outsider-bashing, and suggested that Goan culture and Goan-ness were crumbling on account of bhaille, or outsiders.

It’s a tall burden for the frog. It has now to deal with the threat of cultural annihilation, along with its own.