The pig-heart doctor attempts a comeback, armed with PR tricks and mysterious cures 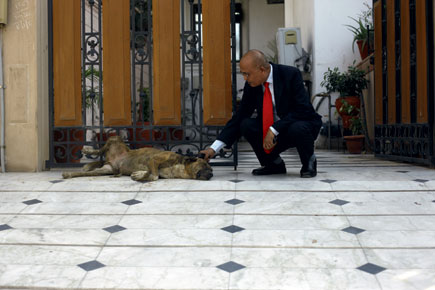 The pig-heart doctor attempts a comeback, armed with PR tricks and mysterious cures


Sixteen years after a botched porcine xenotransplantation put him in prison for 40 days, Dr Dhani Ram Baruah does not take kindly to being asked what he’s working on now. Over the phone amid the barking and yelping in his animal laboratory in Guwahati, he yells, “Why do you ask? You don’t know anything. Read my website!” In person, across the table from me two weeks later, he repeats, with barely receded wrath, “You do not know anything about genetics! You’ll never get this! Write it down: This planet is not safe anymore with present medical science. It is useless against dreaded incurable diseases arising from germline [heritable] mutation—heart disease, hypertension, diabetes, muscular dystrophy, auto-immune disease like SLE, systemic lupus erythematosus…” He pauses a moment to glare through rimless rectangular glasses, and continues, “Medical science is like a limping ship in the middle of the sea…without any destination…standing still. Present medical science is treating symptoms. The people of this country are mentally deranged, thinking they’ll be cured [by it].”

Dr Baruah is working himself up to a state of dramatic agitation—and a sales pitch. “Now, SLE, mostly females like yourself suffer [from it]. They say there’s no treatment; I am curing them. Muscular dystrophy, present science say[s there’s] no treatment but children who can’t walk, talk, I am curing them. Then, where is medical science? They talk big things. Spend crores and crores, manufacture drugs after drugs, where they are standing today?”

It’s pretty clear where Dr Baruah stands today. After his alleged pig heart transplant killed a 32-year-old patient Purno Saikia in 1996, he’s considered to be a good surgeon gone rogue—“crossed over to the dark side”, as one doctor put it. He’s considered to be an unscrupulous experimenter whose excesses are periodically sighed over in the pages of the Indian Journal of Medical Ethics. With his flamboyant publicity seeking, he has gained the reputation of being a barmy PT Barnum figure, ever eager to parade his stock of walking medical miracles before a crowd.

For instance, he was keen to proclaim his xenotransplantation stunt a medical miracle from the start. He’d made sure media persons were in attendance at the “event” at the Dr Baruah Heart Institute and Research Centre at Sonapur outside Guwahati, and had grand plans to present Saikia along with a paper before a conference of cardiologists in Barcelona. Even after he was arrested under the Transplantation of Human Organs Act, 1994, and detained for 40 days, Dr Baruah went on to insist that the operation was a pioneering success. But the total lack of forensic evidence makes it impossible to establish exactly what transpired during those long hours in the operating theatre, while Saikia’s family was being fed rice with what the hospital cook claimed were the remnants of the porcine donor.

Dr Baruah’s subsequent attempts to revive his career through a number of ambitious achievements, including the development of a “genetically engineered vaccine” that “corrected genetic heart defects causing heart diseases and diabetes and prevent[ed] cancer”, were brought to a halt in 2008 when the Assam government banned him from carrying out clinical trials of the vaccine without a licence from the drugs control authorities.

Which is why Dr Baruah now tends to rail at the system that thwarts him and denies his genius. “Pig to human, I was the first one,” he declares. “I designed an antigen suppressant, that’s why he [Saikia] survived 7 days. I made the Baruah valve [a sheep tissue-composed valve, no longer in use], because I have the brains they don’t have.” His greatest ire, however, is reserved for peer-reviewed medical journals—and those who ask whether he’s ever published papers documenting his experimental and preclinical work in them. “What paper?” he shouts, thumping the table. “I have published books. What paper you’re talking about? Nonsense things! Published papers! Papers are nothing. Don’t talk to me about these things.”

He did send a paper to Nature Asia once, he adds, but they rejected it—“because journals are connected to drug manufacturers”, he claims, which would feel threatened by the genetically engineered cures his papers purportedly contained. “I wrote to the editor,” he says, “I said: ‘Don’t publish it! You are [a] mentally retarded man. You’ll die three times, take birth four times, and still you won’t understand my work. To hell with you and your substandard journal!’” He concludes, “People who are gadhe (donkeys), they will do peer review. My word. Peer review! I won’t do it. For what? What is peer? I do not find anyone is brainy compared to my work.”

In addition to over-the-top bluster, Dr Baruah has a repertoire of catchy epigrams and colourful analogies. AIDS, he declares, “is not the disease, it is a phenomenon with social stigma.” Meanwhile, cancer “is not a disease, it is a genetically mega-parasitic phenomenon with multifaceted manifestations, leading to death”. Subjecting a patient to chemotherapy is like setting fire to a wasps’ nest. “I grew up in [a] village, we used to do this. Some wasps are killed, some escape,” says Dr Baruah. “Those [that] escape look for you, and they look to kill you. Chemotherapy irritates, makes genes angry, and because they can’t kill chemotherapy, they destroy the patient.” The best “cure”, he says, is the ‘Baruah siRNA’ (Small interfering RNA, which inhibit gene expression)—found for the “first time on this planet”. It’s a synthetic substance that he claims to have extracted from edible medicinal plants growing around his laboratory in Sonapur. The Barua siRNA, which is administered intravenously and in capsule form, works, he says, because it “tells DNA, ‘don’t send wrong messages. We’ll kill you’.” But what’s in it exactly? “Huh!” huffs Dr Baruah. “You’ll never get it from me.”

Despite the explosive sound bytes and sensational copy they could inspire, Baruah’s longtime public relations firm, HS Communications, finds him to be a bit of a hard sell. “To be very frank,” says Harish Sharma, director, “in the eight years I’ve been promoting him, you are the first or third journalist who is showing interest in his work.” There’s not much for Sharma to do by way of promotions; he just maintains Dr Baruah’s website, drdhanirambaruahnewinventionsinhumangenetics.com, for which the doctor provides all the text (including all of the url). Dr Baruah is clearly also the wordsmith behind the lurid laminated brochures that HS Communications periodically publishes, which proclaim the Baruah siRNA the ‘biological weapon-deterrent to dreaded diseases’, ‘discovered, invented, and described by Dr Dhani Ram Baruah’ who was ‘born to excavate the mysteries of human genes in diseased conditions and their engineering’.

Sharma also intermittently arranges press conferences. Sometimes, they’re to combat a bout of negative publicity, like the one that has followed the killings at Jagdol village close to the Sonapur hospital in 2009, which the surrounding villages claimed were linked to Dr Baruah. (A CID investigation is still underway.) More often, he holds press conferences to launch the doctor’s many books. The latest one, It was a Distant Dream, Now it is the Reality, was launched last November at the Constitution Club in Delhi, and the guests of honour included the Governor of Bihar and a godman, who can be seen pronouncing Dr Baruah a “Gene Samrat, or emperor of gene” on YouTube. Sharma regretfully confesses that he knows “what Dr Baruah deserves, but can’t get it for him. That’s why this year, I’m trying to make a 30-minute documentary about him—I’ll show his journey, his achievements, his controversy.” Sharma says it’ll be his first documentary; his filmic oeuvre so far consists of a single horror film, still awaiting release.

Baruah’s newest patients—often in attendance at press conferences he holds—are eager to endorse his services and fetch him the positive press they think he deserves. Lalit Barua, an excise constable, who was treated by Baruah after he suffered a cardiac arrest in 2004, says, “Ek-doh mahine injection aur capsule mila, phir heartbeat achcha hua thha. Abhi toh achcha hai. Khub achcha hai. (I was given pills and injections for two months, now my heartbeat is good. Very good.)” JK Naik, a shipping company executive, who developed lung fibrosis after almost 24 years working in the polluted Vishakapatnam port, says, “Since about five or six years [ago], I had this abnormal cough for two to three days every year. I went to a doctor at a big hospital in Delhi, he said, ‘We’ll treat you, but your hair will fall, and the condition may recur.’” Then, about five years ago, some of Nair’s friends recommended Baruah. He, along with 30 other patients suffering from illnesses ranging from AIDS to cancer, used to pitch in to pay for the doctor’s travel and accommodation, in addition to his consultation charges (on average, Rs 1.5 lakh per shot). “I got one injection first, and I could notice a lot of difference,” Naik recalls. “After one week, I had zero cough. Over 9 months, I got 20+ injections from him, and I’ve been almost 100 per cent fine.”

Mintu Pramanik, an accountant from Kolkata, is more fervent. His nine-year-old son Debarghya suffers from muscular dystrophy. About a year ago, he’d gone to a doctor in CMC Vellore who’d told him that no treatment in the world could help his son, that he’d die in three years. So he went to an astrologer in Howrah, who declared, “Aapka ladka poora thheek ho jayega (Your son will be completely fine),” and referred him to Baruah. After about 20 visits, and as many injections, Pramanik thinks that prediction is coming true. “My son used to take one step, two steps, and stumble. He couldn’t get up from the chair. Now he’s walking a bit, he’s more energetic. Abhi toh development aa raha hai. We’ll continue to take our son to Dr Baruah for a year at least, because that’s how long he tells us it’ll take for him to get cured.” Pramanik won’t disclose how much he’s paying for this treatment. “Madam, he’s our only son, and [Dr Baruah’s] giving him life. So for us, he’s not next to God, he is God.”

“God almighty, God almighty. That man!” exclaims Dr Sujoy Shad, an eminent cardiothoracic surgeon at Sir Ganga Ram Hospital, who has a somewhat different opinion of Dr Baruah. “I think he lost his marbles 20 years ago. What he’s doing now is nothing short of robbing the grave. If you offer hope to the hopeless out of charity, that’s fair. But to take money for hope that’ll be belied soon, that’s immoral.” Dr Shad says that “magical remedies” are a reflection of demand by patients who “will go to any extent to avoid standard treatment”. “There’s a gentleman just around the corner whose claim to fame is he helps you avoid [a] bypass [surgery]. Anyone can. In the course of doing so, if you’re dead, you’re dead!” As for the Baruah siRNA, he remarks drily, thumbing through the publicity material, “Nifty brochure. But this is the time for evidence-based medicine. If I wish to alter an established operation, I can do so. But if I claim it’s superior, then it calls for a trial, supervised by a hospital ethics committee. He should convince the ICMR, the DSIR, first.”

Baruah won’t hear of it. “Who can stop the science?” he roars. “Government can stop? They have no right!”