Milind Soman and the spiritualism of running 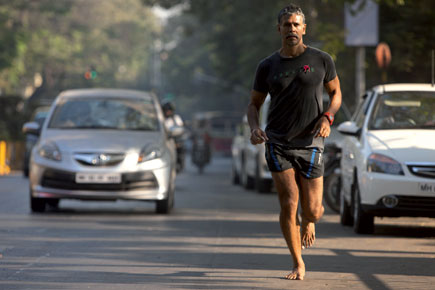 Milind Soman and the spiritualism of running

It was in 1988 that Milind Soman stopped swimming. He had been a national-level swimmer, but his tryst with sports had lost momentum. It would take 16 years for it to return. In 2004, the Mumbai marathon started. Soman had always hated running, but a marathon had been a childhood fantasy. He started with the half marathon, which he clocked in two hours and five minutes. He slowly built it up and then ran the full marathon two years later in four hours and 50 minutes. His best time now is three hours 56 minutes.

“What worked for me was that I got into running gradually, and I ran daily,” says Soman, “I had always been fit, so that helped. That’s why I have never got injured— something that all runners talk about. I am very aware of how my body responds to a certain exercise. I listen to my body and also understand it.” That is also why he now only runs barefoot.

Barefoot running caught the world’s fancy after Christopher McDougall wrote Born To Run in 2009. Suddenly everyone was talking about the Mexican tribe Tarahumara, members of which still run barefoot. The writer went to Mexico and met the fastest runners there. He then set up a race between the best ultra-marathoners in the world and the best tribals.

That was the book that radically altered Soman’s approach to running. “The whole book is so inspiring,” he says, “I don’t even remember now how that book ends, or who wins in that race, because that’s not the point. After reading it, I began to question if the way I was running was right. That book changed the whole business of running in the world. Vibrams—they are like socks with a 2-mm sole and toes but with no heels or arch—became popular because a character called Ted McDonald, also known as Barefoot Ted, runs wearing them in the book. Born To Run made me start running barefoot.”

For walking, Soman uses footgear called Luna Sandals, invented by McDonald. “You have to prepare your feet for this kind of running,” he says, “Your skin on the sole is really soft as you wear shoes all the time and the nerves come right to the surface. When you start running barefoot, your nerves deaden or recede. The skin becomes thick and soft like a sponge. It will never become hard if you are running correctly. Hard is bad, as that breaks. You need soft and strong soles.”

Soman says that once you take off your shoes, you can feel the difference instantly, but it took him two years to fully understand the difference between running barefoot and with shoes: “Shoes make you weak. You run on a heel, so your weight is in front. It’s a completely wrong stance. The stresses in your body when you wear shoes are all unnatural.”

Like Soman, there are many other barefoot runners in India. One of them is Nilima Pai, a 38-year-old homemaker and part-time teacher at a law college. She says that after she took to barefoot running, she regretted ever wearing shoes. The daughter of a farmer originally from a village in Karnataka, Pai always had an aversion to shoes and spent her childhood roaming about barefoot. She started running marathons in 2010, and after a few more, realised that she missed feeling the road with her feet. Now, she only runs barefoot, be it a marathon or just a weekend run in her Andheri East neighbourhood. “People think I am crazy, but I need to be one with nature and it’s such a natural thing to do. The only precaution I take is that I get a tetanus shot every six months.”

Pai likens the feeling of barefoot running to a spiritual high—she can’t sleep for hours after she runs. “Every step you run barefoot is a different experience,” she says, “It makes me happy, and has made me super energetic.”

An ardent promoter of this form of running, Soman is often asked how anyone can run on Indian streets, given how dirty they are. His answer is that you have to find a good path for yourself. “I looked for places to run barefoot. It was tricky finding it. I started with Worli Sea Face. It’s a good flat surface. Concrete is the best surface to run on.”

Like Pai, Soman also speaks of it as a spiritual trip of sorts. “When your feet touch the ground, it’s a different experience,” he says, “I can’t help but sound like a spiritualist. When you run barefoot, the energy you get from the ground is unbelievable. You never get tired.”

Most runners start running after 30 years of age, once the fear of being unfit sets in: like 43-year-old Hitesh Vallabhdas Thakkar, who started two years ago in Powai as part of a running group called Striders. He feels that once you get over the fear of running on pebbles and stones, barefoot running takes you back to nature. “Everyone needs to feel that.”

Soman says that unless one runs regularly, the muscles one needs to run tend to atrophy, left unexercised. And barefoot running is much better for those who start late in life. “You run with your walking muscles, like your shins, and that’s wrong. That’s why one gets injured,” he says, “One has to develop your gluts, hamstrings and Achilles tendon. To develop those muscles, you need to run barefoot and run very slow. When you start running barefoot, you will figure out the right stride. With shoes, you run lazy. You run quicker when barefoot as your foot doesn’t spend too much time on the ground. Your stride rate will double. You start using your running muscles. You never used your Achilles tendon when in shoes, so it shortens. It takes almost a year to lengthen it. But people should run whatever age [they] may be. Just 20 minutes every day. You will feel the difference.”

In his 2007 book, What I Talk About When I Talk About Running, author Haruki Murakami, an avid marathoner, says, ‘Most runners run not because they want to live longer, but because they want to live life to the fullest. If you’re going to while away the years, it’s far better to live them with clear goals and fully alive than in a fog, and I believe running helps you do that.’

Soman has his own take on why running barefoot makes him a better person. “When you run barefoot, it grounds you. You are close to the basic truth. It makes you think positive. It may sound spiritual, but it’s physical and chemical. When people started wearing shoes, [they] lost touch with the ground, and thus lost respect for it. I feel the easiest way to be simple is to walk barefoot. It’s not about not eating something nice, and not having a phone, being simple. When you don’t wear shoes, it just happens… life becomes simpler, you just don’t want anything anymore. So of course if you are running in India, there is shit and phlegm on the road. Animals may have died there. You can clean it all off. There is more dirt in your mind than on the roads. How will you clean your mind?”

He likens it to meditation. “Most of us are not intelligent as we don’t respect our body. I have never, ever met an unhappy runner. Running makes you happy, it takes away everything. You get your own space. At the same time, you can get in touch with other people. It’s a collaborative sport. We have evolved to run as a community. I have wondered why running is such a mass sport. You can run in a marathon at whatever level you may be. And amateurs and world champions run [alongside] each other.”

It is true that barefoot runners risk injuries, but that’s only if they don’t understand the principles of it. “The main thing is to have a quick stride. I have never got hurt except the time I got a splinter. As I ran, it dug deep into my sole. I just came home and took it out with a pin, and that’s the extent of all my injuries. People are worried about tetanus and hookworm. We are anyway constantly inhaling the tetanus bacteria, and hookworm can be transferred if someone splashes dirty water on you. I don’t worry about those things.”

At the end, it’s a quest: looking within and working at being better. “When you do a sport with passion, then it all comes together,” says Soman, “That space is special. Running gets you that space. I run to be in that space. I don’t need to be a champion.”