The magic of being miserable in the Northeast 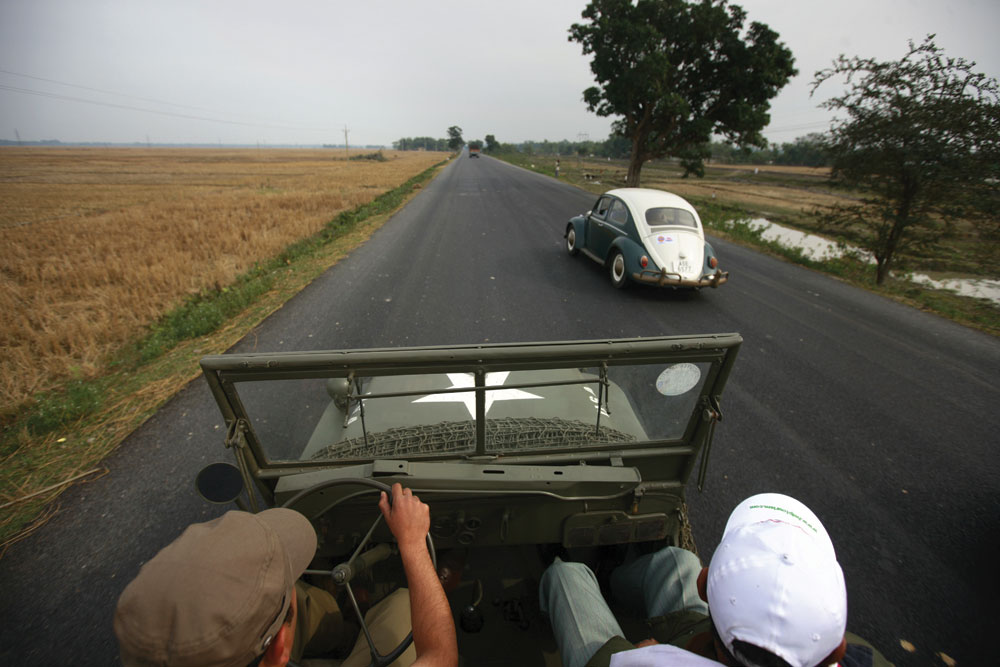 MY FIRST ROAD TRIP came about after I had pitched a story to my boss at the newspaper I was working in to tag along with a travelling music festival in the Northeast. Miraculously, it was approved, and our photo department was more than happy to watch the resident miscreant go away for an entire month. My only exposure to hitting the road had been American movies like Easy Rider or books by Ted Conover, and of course, Jack Kerouac. My backpack had a bare-boned camera kit and a book which I can’t recall since I didn’t read a page. My friends wondered if it was safe while my sister casually asked where and when do I have to go for visa interviews.

Of that trip I recall tracking down a local film crew and the scriptwriter—chewing a twig seated on a stationary bike—introducing me to Manipur’s Shah Rukh Khan who was pushing a buffalo that got too close to him. I saw a Maruti Omni fall into a gorge from the side of a skinny road, and Kohima—the most charming town I have seen—with a central market where frogs and rats and dogs were sold not as pets but to be consumed as food. On the climb to Sela Pass, I saw snowfall for the first time and the tiny flakes floating past me made me realise that there was no place like Arunachal and its raw beauty.

My next trip to this part came exactly two years later when a friend’s friend messaged me on Facebook asking if I was keen to visit the Lake of No Return from Pangsau Pass in Arunachal. I didn’t bother looking it up and just said ‘yes’. I met Byron Aihara on a foggy cold morning in Guwahati. A Japanese American and a certified Indophile, he has been visiting India for a decade and prefers to stay off the touristy circuit.

Ours was going to be a bike trip but Aihara’s Enfield broke down on the way to New Delhi Railway Station, an hour before he was to board the train. I left mine back home too. I got in touch with the organiser of a vintage car rally passing through Guwahati from Shillong that was on its way to the Lake of No Return and they were more than happy to have us around.

When we thought ‘vintage’, we didn’t imagine World War II Jeeps and Beetles. Passing through towns like Digboi, Dibrugarh, Tinsukia and my favourite, Margherita, the convoy made the locals gaze in awe. I learnt that Ashok Lyngdoh, the leader of the pack, had a fascination with World War II Jeeps and had quite a few of his own. He told me he was a professor and I wondered what a fascinating classroom his must be.

Cutting through the mining town of Lekhapani on the infamous Stillwell Road, also known as the ‘man a mile’ road—we got into Pangsau late evening and found the village square geared up for the three-day festival, a state sponsored extravaganza with a bamboo shack each for every tribe of Arunachal. It included a rock show featuring a band whose vocalist often referred to a lyric book while he belted out Iron Maiden songs. As with everything, the fun was at the post-event party where Byron and I danced in a drum circle inside the bamboo hut of the Muklom tribe. I wasn’t quite kicked to see the Lake of No Return next day, that too for just a few hours. Many a plane has found its way to its bottomless waters, but today, boatmen offered rides to tourists for a few rupees. I hadn’t come all this way to feel like I was on a boat in the lake at Mumbai’s Aarey Milk Colony.

On the bus to Dibrugarh from Pangsau, a girl named Ritu sat next to me. She saw my head plonked on the backpack and enquired where I was from. Our conversation went all right till she misunderstood my lack of energy for lack of enthusiasm and accused me of dismissing her as a silly village girl. I told her I was ill. Not only did she apologise but eventually asked me if I were willing to marry her. She wanted me to get off at her stop and meet her parents. I declined as diplomatically as I could.

OUR NEXT DESTINATION was Gelling, where the Chinese Army had made deep inroads during the war. We would have to travel along a pagal nala, roads unusable during rains, up the Siang River (the local name for Brahmaputra). After a nine-hour boat ride up the flat sandy banks and blue waters, we lost ourselves in a dusty town called Pasighat. A drunk travel agent told us there was no bus to Gelling. There was one to a place called Tuting on the route but it had left already. He sold us two seats on a night taxi to Yingkiong, halfway to Tuting. At a check-post, we were joined by four other taxis and the drivers, all looking like they were not even 18, told us they were going to a nearby temple. We became a convoy of five rickety Tata Sumos, manned by five tipsy teenagers. They dropped us in the wee hours at Yingkiong, where we found a mouldy hotel room.

The girls keep filling their cups carved out of horns with rice wine till they overflow. A symbolic platonic bond is thus created, something sacred that will always hold true

The next morning, while we were standing on the road, a Maruti Omni came out of nowhere and its driver asked Byron if he wanted a ride. He dropped us five minutes away at Gandhi Bridge and then asked for Rs 200. We negotiated and felt lousy at being ripped off at 7 am. The bamboo bridge held itself precariously over a raging turquoise river. It swayed with each step, even more when someone would walk towards us. Several planks were missing and we held on to the ropes. Towards the last section, a man on a bike, loaded with freshly-cut grass waited for us to make way so that he could go on it. I waited to see if he made it safely to the other side, but mid-way, he disappeared in the fog.

At the taxi stand, we took a shower under a waterfall. It was ice cold, but the walk on the bridge had charged us up. On my right, in the taxi, was a man carrying shotgun shells, and underneath my seat were some chickens. We were 18 people—12 inside, and six on top with luggage. The road was a wonderful collage of rocks that made the car jump.

At Tuting, a Republic Day match was going on between two Army regiments. A shopkeeper suggested I meet the commandant and seek permission to stay at the circuit house. I didn’t want them to catch Byron’s American accent and instructed him to remain silent and told the commandant that he was my deaf and mute assistant. We got consent to stay in a room at the Inspection Bungalow and Byron continued his deaf and mute act.

Sadly, we had to leave the next morning after the watchman told us to vacate as an army contingent was arriving. We made our way to an under-construction monastery, past an empty airstrip occupied by cows where we got a room reserved for students. We stayed there for a week, eating the same meal of dal and rice every day and helped carry logs of wood and sand bags. I shaved my head, played cricket with the monks and suffered an epic case of sunburn on my pate.

After a visit from a policeman asking too many questions, we took the next taxi out of Gelling and the journey of 300 km took us more than 24 hours. From there we took a bus to a place close to Tizit and walked from Assam into Nagaland and waited for a ride to Mon, the home of the Konyak tribe. Two days in Mon and yet another policeman came calling. I was fed up of such intrusions and chose to go to Kohima.

In Kohima, we were treated to a dinner of veal and exquisite animals at a minister’s home. A day later, Julian Jasokie came to our hotel and sold me some T-shirts, all smelling of rice wine. “Why?” Big party in his village happening. “Want to come?” “Of course.”

We went to Khonoma with him and witnessed a ritual called Sekrenyi where the boys of the village, dressed in their traditional best, sit in a home and serenade the girls with folk songs. The girls keep filling their cups carved out of horns with rice wine till they overflow. A symbolic platonic bond is thus created, something sacred that will hold true all their lives even after both are married to their respective partners. I almost wished dating would be this cool in our cities. At breakfast the next morning we sampled some fried insects, some more rice wine, and steamed rice that was served in hollow bamboo sticks.

On reaching Shillong, we parted ways. I had to go shoot a story on caving in Jaintia hills. Once I reached there I found that the reporter, not sure if I would turn up despite my confirmation, had organised another photographer. So I left and made my way to a petrol pump on the Aizawl-Shillong highway. The place was deserted. A car came by and the driver offered to drop me to Shillong for Rs 500. I went back to the petrol pump, and told the owner, a Sikh, that I was off. He insisted on meeting the driver who then suddenly refused to go. The owner told me that the driver would have taken me a little ahead, stripped me off my belongings and maybe even murdered me. He then made some calls and put me on a bus.

The bus dropped me at Malki Point and I had to look for a guest house called Holiday Inn. Seven roads emerged from where I stood. I removed the machete I had bought in Burma and walked up each slope. There was not a human in sight. In the second last lane, there was parked a Maruti 800, and someone flicked a cigarette off it. I walked close and one of the men inside shrieked. I realised it was because of the machete and put it away. I showed them my press card, voters’ card, driving licence and the empty wallet and begged them to help me find the hotel. They invited me inside, shared some beer and then dropped me outside Holiday Inn where Byron was already staying.

This was the beginning of our trip’s end. We exchanged notes and Byron was convinced I loved being miserable. Perhaps. But what is a road trip without some suffering? India is best experienced like this. Our last lunch was at hotel HongKong, a veteran establishment in Police Bazar. We stepped out on the street and had just stood near a fruit stall when a slushy mess came flying into Byron’s face. The stall’s assistant had had a fight with his master and flung a chikoo on his forehead which exploded in all directions. Byron licked off some of it with his finger. So what if there is some misery—you can always find something sweet in it.

(Ritesh Uttamchandani is a photojournalist based in Mumbai)