Streetwear has become quite a rage among urban youngsters with an attitude. Do we spy another revolution in the making? 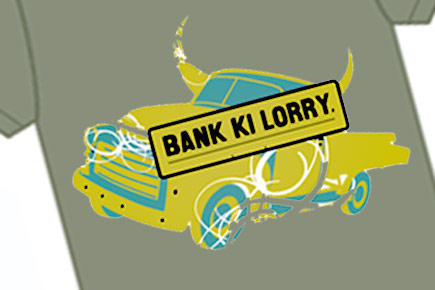 Streetwear has become quite a rage among urban youngsters with an attitude. Do we spy another revolution in the making?


Walking down Janpath in Delhi not too long ago, I came across a sparsely stocked store, the sort you’d imagine has trouble making the rent. It was selling a plain white T-shirt with a marigold garland printed on it and the words, ‘I am Phamous in Bollywood’. I wanted to buy it, but for a variety of reasons, never did. Then, peering over a cup of coffee last week, I saw someone wearing a T-shirt with a picture of a truck and the words, ‘Bank-Ki-Lorry’ (literally, the bank’s lorry, but open to interpretation as a Hindi cuss word that refers to a sibling and an organ given to quite another sort of spending). It was tacky, but cool.

Something about these T-shirts, you must admit, makes you remember them. The one about the bank actually had me hunting for it. The T-shirt was made under a tag as quirky as the message that was on it: Bosedk (while scholars insist that it means ‘Sir, are you well’ in Sanskrit, saying it aloud on Indian streets would have you referring to something vulgar with ‘vul’ being the operative syllable).

Later, it turns out that the T-shirts were part of an art project by Jiten Thakral and Sumit Tagra, and were never intended to hit the streets. Still, this outbreak of wink-wink-nudge-nudge messages emblazoned across chests got me thinking.

For years, the tee has been subject to much abuse—it’s been ripped and shredded beyond recognition, littered with brand names in font size 36, survived being tucked into shorts pulled up to the chest—but it has held out. Like a lone ranger against the fickle fashion sun, the T-shirt has proved that it has little left to prove in its claim to greatness.

Some three odd decades after it unfurled the punk movement in Britain with an image of the queen with a safety pin up her nose, could the T-shirt be rolling up its nonexistent sleeves for another street brawl? This time for an entirely desi revolution? Could it be? Rajat Tulli, the brain behind Delhi-based Happily Unmarried, agrees that the T-shirt is at the heart of a new movement. “It is definitely the contemporary fashion coming out of India,” he says, “The idea is that you are wearing something that’s modern yet at the same time Indian.”

It’s a sign of the globally exposed Indian youth taking increased pride in being Indian. Only, this love for India is not manifesting itself in the form of humdrum clones of ‘I Love NY’ or ‘I love NYPD’ T-shirts. The closest indigenous equivalent, if you may call it that, would be the infamous ‘KLPD’ T-shirt (which is better understood not as an ode to Kuala Lumpur’s police department, but a Hindi phrase for the grand letdown of a hard-on denied any action).

It’s all in jest, of course. But it speaks of a pride in being understood purely on Indian terms, and if the youngster’s search for cool individuality must find expression in loud Indian kitsch, so what? It’s what gives it its authenticity, its verve, its vividity. At the head of the trend are several edgy fashion brands peddling their own version of desi chic, and the metropolitan college crowds are loving it. And, be warned, what they do today, the country’s yuppies will be doing tomorrow… in fact, some of them already are.

So don’t be surprised to see Armani, D&G and their ilk get bumped off chests to make space for Bhagat Singh, the Khanda, Bollywood, Jama Masjid, tongas and all the stuff you’ve had to have been around to figure out, including obscenities in the good-old mother tongue.

Tulli, who also sells block printed shirts with autorickshaws and other Indian iconography under his label Mental Block, maintains that the move towards desi expressions is a natural progression. The urban youth is done with the big brands, he says, and is now bored of Benetton and Reebok T-shirts. They want that unexplored niche instead. “Even Fabindia shirts and kurtas have become mainstream now,” says Tulli.

Among the pioneers of zany T-shirts was Tantra, a label that decided to go for people bored to tears by regular tees. My own favourite is one with a double-humped camel that says, ‘India: a land of great humps’. This is ‘rarefied T-shirt art’, according to Rajiv Ramchandani of Tantra. “When we started Tantra,” he says, “the idea was to come up with a range for the brown race—what made us tick, what made us turn. We were selling India and nothing else. The point was that there was no craziness in T-shirts. People were done with the Armani T-shirts which are at best a residue, worn and made without thought.”

Himanshu Dogra of Playclan, another marketer of funky T-shirts, says that this was waiting to happen. The initial high of globalisation has worn off, and just as music has seen a desi takeover even at relatively upmarket hangouts—it’s more of a blend, actually—youth culture has found its funk in the confidently ‘glocalised’. “I think what has happened is that we were working on a borrowed idea of filmstars and sports people,” he says, “Now we are looking inside more that outside. The youth is more confident in what it wants.” Playclan’s T-shirts include those with Delhi’s Jama Masjid and an Indian family standing with their Bajaj Chetak. A Nift graduate, Dogra feels that this is a sign of growing up. It’s a process that is assimilative at one level while ushering in a new individuality at another. It’s a pointer for Indian fashion as a whole. “Till fairly recently,” he says, “Indian fashion was all about copying trends and colours and palates rom Western runways. Now, there has been a distinctive move towards individuality.”

The point, Dogra insists, is to take mundane things we see in our daily lives and present them with fresh appeal—Indian pop art on a T-shirt, if you will. His company has used classics such as the good old Amby, the sober-old postman, the rickety-old autorickshaw and even out-and-out truck humour. Playclan’s soon-to-be-launched collection is an Indian take on graffiti. “Though graffiti is an urban street art you would normally associate with the Paris Metro or London underground,” says Dogra, “ we are writing it all in Hindi.” Urban streetwear might unapologetically draw influences from international street fashion, but it’s Indian in appeal. Is there an element of intellectual property theft in all this? Of course there is. Street fashion has had an impressive run in the US, where personalised T-shirts were adopted by the hip-hop culture, according to Umang Shah, the man behind Brooklyn-based label Chor Bazaar, which sells funky T-shirts in New York. “The idea is to not wear a mass produced T-shirt from Armani or even Old Navy. What’s the point of paying to wear a T-shirt that advertises a company?” asks Shah.

So, how far will this trend go? That Indian street fashion has a potentially larger following than the designwear that comes strutting down the ramp is a foregone conclusion. As Ramchandani asks, “How many people have bought a Rohit Bal as opposed to the number of people who have bought a Tantra T-shirt?”

Also note that such T-shirts are being worn both by the dude on a mobike and the executive in an Audi. For further clues, dig into some of its sub-movements—such as the Punjabi undercurrent. Brands such as 1469 have been runaway successes, selling T-shirts with Punjabi messages like ‘Sardar dey kaakey, na fikr, na panga’ (Sardar’s sons, no worry, no provocation), apart from the staples of Indian pop art.

Other T-shirts with regional appeal include PlayClan’s Indiana Rascala series and Rajnikant tees, not to mention the one in Gujarati with ‘Kem Che’ (what’s up) under the classic Che Guevara duo-tone.

What’s flying fastest off the shelves, though, are the tees that make their way into hearts and minds across language, age and other barriers. The Delhi-based designer duo of Abhishek Gupta and Nandita Basu of the label Fightercock, for example, have struck significant success with a collection of Subhash Chandra Bose and Bhagat Singh T-shirts sent out a couple of years ago. In aesthetic terms, their goal was to offer an indigenous replacement for Che T-shirts. Now, even 1469 is selling T-shirts imprinted with Bhagat Singh, his hat, handlebar moustache and everything else that’s burnt itself into Indian synapses.

Thankfully, again, the temptation to go overboard has been resisted. Gurmeet Kaur, 1469’s store manager, says that the company has turned down demands for Bhindranwale T-shirts.

In the meantime though, some of India’s young crowd has also rescued Shiva-Parvati and uber-loud Hanuman T-shirts from neo-hippie trails and placed them in the urban closet. Just like the stylised Omkar symbol tees you often see, these signal novelty and coolness more than anything really religious.

But not everyone is in complete agreement. Umang Shah of Chor Bazaar, for one, would rather not have anything that screams ‘I am desi’. “Our designs are about the experience of Indian culture, and not about a deity with eight arms, the Om symbol, the Taj Mahal, etcetera,” says Shah, “We want our designs to evoke the idea that there is much more to India than what Western culture portrays.”

Tantra, meanwhile, is only too pleased to sell a T-shirt with a snake charmer on it. It’s reverse snobbery of sorts, all part of a street ready to assimilate anything flung at it. As fashion revolutions go, it’s bigger than the glamfests you see on the idiot box. Which is also why Bhagat Singh edging out Che should not surprise us.