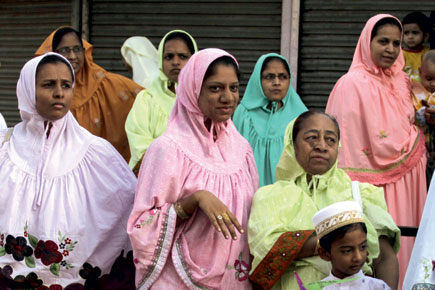 
When women ask the lady I am interviewing, a 53-year-old Bohri, if she has had her three daughters circumcised, she almost always nods. For, she had promised her mother-in-law that she would keep their non-circumcision secret. Like many other Bohri women of her generation, she was about to turn seven when she herself underwent ‘khatna’—the excision of her clitoris. “I couldn’t walk. I had to walk with my feet apart for many days.” No one discussed what had happened or why it did. She could walk properly again only by the time her summer holidays ended.

She got married at 18. By 19, she was the mother of a baby girl and clear that her little one would be spared the trauma. “After what I went through, I didn’t want my kids to go through it.” Her aunt had shown her a Reader’s Digest article on female genital mutilation, and she’d been shocked to read what it was all about. “It is done to suppress sexual desire,” she says, still appalled by its unfairness, “I read that the system originated in Africa, where the men went on war. Since the clitoris is the [arousal causing] part, it was cut off to control the women.”

While the primitive tribal practice has never had Islamic sanction, unlike male circumcision which is routine, it has lasted in several African and other sub-cultures. In the West, clitoridectomy used to be done by doctors about a hundred years ago (see ‘Caught in the Act’). Today, in India, it is peculiar to Dawoodi Bohras, a sub-sect of Shia Muslims.

When the 53-year-old Bohri’s eldest daughter was old enough for khatna, she showed her husband the RD article. He asked her to do what she deemed best for the girl. But living in a joint family, there was pressure from her in-laws, generations of them. She showed the article to her mother-in-law, who was also won over to the cause. But she was helpless in front of her grandmother-in-law, an 85-year-old who lived with all of them. “I told her to leave it to me.” Since then, she has had to lie about having had it done. Asked in social gatherings if her daughters have had their naak vindhayu (nose pierced: community code for female genital mutilation), she simply says ‘yes’. So do her daughters, who have been explained the strange circumstances that force them to lie. “From the article, I learnt that it was unscientific,” says the protective mother, “And if you suppress sexual desire, how can you please your husband? You won’t even desire sex.”

Dawoodi Bohras are a small, closely networked community, and she fears that letting out the truth would be seen as an act of rebellion and risk having the family shunned by the rest. But the whisper campaign against the practice is getting louder, aided by online activism, and it may not be long before the community has to address it squarely and openly.

The fear of ostracism is also what stops ‘Tasleem’, a Bohri woman in her forties, from divulging her real name. On 14 October 2011, she initiated an online petition at change.org, asking the community’s religious leader, HH Syedna, to ban khatna among girls. She also posted him a large cut-out of a blade, with an image of a girl crying during circumcision. There was no response from him.

By 10 January 2012, the petition had got only around 1,000 signatures—that too, mostly from outsiders. But the petition did succeed in generating media   coverage, including an article that the 53-year-old Bohri’s friend brought along to a menij, a community gathering of friends. The friend, the grandmother of a 7-year-old girl, showed her the article featuring Tasleem’s campaign, and asked her for her opinion. She told her the truth. Her friend, agreeing wholeheartedly, kept the article away to show her granddaughter’s mother. The 53-year-old does not know whether the child finally had to undergo khatna or not. It is not a question easily asked, such is the silence around it. Any opponent of the practice within the community can be seen as “someone who doesn’t follow the religion”, she says, referring to a peculiar interpretation of it that few dare debunk.

On her part, Tasleem is keen that more such articles appear in the Gujarati, Hindi and Marathi media in the run-up to children’s summer holidays, which is when most clitoridectomies take place. The practice remains widespread, she says. By her estimate, 90 per cent of all Bohri women have undergone it, though she herself has not, thanks to a progressive mother who fought off the pressure of her in-laws. There is no way to corroborate Tasleem’s figure; a Bohra executive in Mumbai calls it a “gross exaggeration”, but he adds that it is worth fighting against even if it is only 9 per cent.

The online battle that Tasleem is waging has involved joining Bohra discussion groups, posting links and getting across to people who have daughters. “The problem is most unmarried Bohra men do not know about this ritual,” she says, “Some guys argue that it doesn’t happen. Then they find out it does, and that itself starts a discussion.”

The anonymity of online activism helps her conduct discreet research on the issue. She has learnt, for example, that there are varying degrees of cuts that are made. Unlike the female genital mutilation practised in Africa, only the clitoris is supposed to be excised in India. But some make do with a scrape. Still, khatna can lead to lifelong complications in menstruation or severe urinary tract infections, apart from permanent loss of libido. Although khatna is traditionally done with a blade at home by a community elder, some parents also approach doctors to do it surgically in hospitals. A surgeon in Mumbai’s Saifee Hospital, set up by the Syedna himself, confirms that she receives such requests.

Pain is all that 25-year-old Aarefa Johari recalls of her Khatna. “I remember how painful urinating was,” says she. Only after reading about it much later as an adult did she realise that pain was not all she’s had to suffer. She still recoils from the discovery of its intended purpose. “How can you just cut off a child’s organ?” she asks. When upholders of the practice point out that it isn’t as barbaric here as it is in Africa, she gets even more angry. “How can you do it without my consent?” she retorts. “How can you cut off my sexual organ to control my sexuality?”

For many years, Aarefa argued about it with her mother, who had assumed that since it is an age-old tradition, there must be a good reason for it. She had prayed all the while, the mother recalls, as she sat in the room watching her two daughters’ khatna, and was relieved to have them urinate normally after it. “It was just scraping,” she pacifies her daughter now. “The fear you went through was greater than the physical trauma.”

Over the past few years, Aarefa has grown increasingly critical of her community. It considers itself progressive, but really isn’t, in her opinion. “No amount of lace or ribbon can make your rida (Bohri burkha) look attractive,” she scoffs, “It is a penguin suit you wear to hide yourself.” To her mind, it is ludicrous that Bohras should see themselves as superior, often sneering at other adherents of Islam as ‘Muslims’. “And what does that make them?” she wonders.

Having left the fold, Aarefa does not fear ex-communication. A journalist with Hindustan Times, she is actively highlighting the need for a ban through articles and online media. Meanwhile, her mother isn’t entirely convinced that khatna is barbaric. “Some people say it reduces the chances of cervical cancer, just like male circumcision reduces the chance of cancer among men.” If you tell her that there is no scientific basis to such claims, she responds with, “If no one has conducted a study on it yet, how can you dismiss it?”

While Aarefa’s mother is ready to give the custom the benefit of doubt, the palpable fear of ostracism keeps the campaign in the shadows. The Bohra religious establishment has a record of using excommunication as a tool to retain its grip. It implies a complete social and financial boycott, which, in a tightly knit business community, could prove crippling. “As I grow older, the fear of excommunication becomes more real,” says Munira, a 34-year-old mother, “You get banned from the weddings and social functions of your loved ones. It is horrible. I want to be part of the community for the sake of my family.”

Asghar Ali Engineer, a leader of a reform movement called the Progressive Dawoodi Bohras, was cast out  for taking up issues of authoritarianism and corruption in the religious establishment. “I have been fighting for reform for 30 years,” he says, “and it is a complex thing.” Although he has spoken out against female genital mutilation, his movement hasn’t yet taken the issue up in its charter of reforms. “We can’t even get support on secular issues like human rights and corruption,” he says, “a religiously sensitive issue like khatna will isolate us further.”

If Engineer views the Syedna’s unquestioned authority as a problem, Tasleem sees in it an opportunity. “He is the ‘Voice of God’ to Bohras,” she says, “This is one case where a single individual can make a difference instantly and completely.” But the Syedna has had nothing to say on the issue so far, and shows no sign of giving in to the appeals of a handful.

The silence remains, but its nature has begun to change. Some women are using the secrecy around khatna to shield their daughters and granddaughters from it. More importantly, they are using the anonymity of the internet to mobilise the groundswell of Bohra opinion needed to excise the practice once and for all. It’s an idea whose time has come.