Spa Capital of the World

History made it so. And the Hungarian city has done its utmost to retain the title 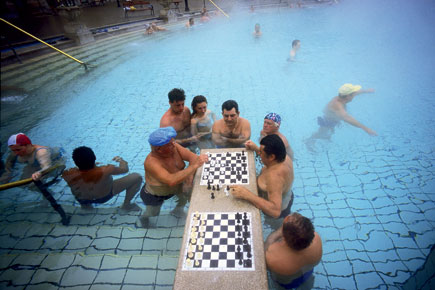 History made it so. And the Hungarian city has done its utmost to retain the title


“How long did you play chess today?” I asked the tanned fat man in a bathing suit. “Oh, about ten hours,” he shrugged. “Ten hours in the water?” I asked again, incredulous. “Oh yes,” he said with a laugh, “Sometimes we can stay longer.”

Playing chess non-stop for ten hours may seem a feat in itself, but playing chess for ten hours sitting half naked in a large semi-circular outdoor swimming pool, on the first day of spring in Hungary, seemed to border on madness.

“You should come in the winter,” my chess-playing friend added, “In the winter, this is the most beautiful place in the world.” Looking around me, as the lights came on in the purple twilight, making the pools around me shimmer with a deep turquoise glow, it was easy to imagine how magical the winters could be. I had seen photographs of snow covering the ground between the pools, and steam rising so thick from the warm water that the bathers seemed to melt in a blur of multicoloured smudges. Now, at the end of a glorious spring day, the air was just cool enough for a very faint mist to skirt the edge of the water, as families, couples, tourists and hardened locals floated under the stars and a crescent moon, chatting, cuddling, daydreaming or simply playing chess. The water was so warm and soothing that I could easily see why one could sit here all day.

I was at the Szecheny Baths, a sprawling primrose yellow neo-Baroque bath and spa complex on the edge of a park in the Hungarian capital Budapest. The buildings, built between 1913 and 1927 on the site of original mid-19th century thermal baths, reminded me of a large three-tiered wedding cake, with white columns supporting corniced archways and neo-classical statues dotted here and there. They surrounded a large interior courtyard, in the middle of which were three large pools filled with warm thermal spring water. The water comes from one of the 123 hot springs supplying 70 million litres of water a day (enough to fill about 30 Olympic-sized pools) to the 50 or so spas and thermal baths of Budapest, earning the city the name ‘Spa Capital of the World’, a title officially bestowed upon it by the World Balneological Congress in 1937.

Earlier that day, I had met the ominously named Doctor Rak (Rak means ‘cancer’ in Hungarian), the technical director of the management company that now owns the largest and most prestigious spas of Budapest. I had been told by the tourist board that he knew more about the city’s spas than anyone else. As we shook hands, his ice-blue gaze contemplated me with suspicion, and I felt like a foreign journalist caught prying into a state secret, about to be hauled off to some underground chamber.

Doctor Rak soon lightened up, however, when we stepped out into the bright inner courtyard and he proudly showed us the large Szecheny bathing complex, its blue waters sparkling under the unusually hot March sunshine. As he began telling us the history of the spa, and of the whole spa culture in Hungary, his eyes changed from ice to the vibrant colour of the sky in high summer. Clearly, the spas were his passion, and the history that Doctor Rak told me was also the history of Hungary.

The Celts were the first to discover the healing waters of what is now Hungary, around the second century BC, and they named their settlement near Budapest ‘Akink’, meaning ‘abundant waters’. Then, in the first century BC, came the Romans, who built public baths to which legionnaires flocked on their way home from battle to heal their wounds.

The mineral-rich waters were not only used for their healing properties for the body, but for the mind as well. They contain the anti-depressant lithium, and Roman physicians, aware of their mood-lifting properties, would prescribe spa cures for their mentally ill patients. The ruins of Aquincum, an ancient Roman town and spa, lie on the outskirts of Budapest and are open to visitors.

The spa culture of Budapest came to flourish next with the Ottoman invasion of the Middle Ages, when two of the most remarkable spas still functioning in the city were built: the Kiraly Spa, built in 1565, and the Rudas Spa, originally built in 1550 and then reconstructed by the Turkish Pasha Sokoli Mustafa in 1566.

I visited Kiraly early one morning with a group of Hungarian children who were there to soak in some of their cultural heritage. In the original 16th century Turkish bath area, built of reddish brown marble, an octagonal pool approximately 10 metres in diameter had been sunk into the floor under a large domed roof, punctured with myriad tiny octagonal windows that let through powdery shafts of sunlight. Dark streaks ran down the surface of the dome, traces of centuries of rain. Surrounding the pool were eight archways carved into the marble walls, that sheltered stone benches for resting between dips in the waters, or smaller pools of varying temperatures: 40, 32, 26 ºC. The main pool was a perfect 36 ºC. For the hardier visitor, there was a steam room that smelt of lavender and a sauna. Finally, after soaking up the warmth and minerals of the spa, those needing a bit more relief could choose from a whole range of relaxing and therapeutic massages.

I visited the Rudas Spa, very similar to Kiraly, on a Saturday night, when it remains open until 4 am in an effort to draw in a younger and hipper crowd than the arthritic pensioners who tend to come midweek. A few times a year, it even organises musical evenings, with techno or trance music blasting away all night.

Seeing the young men and women milling around in the middle of the night in the dimly lit shoulder-deep waters, I remembered Doctor Rak, who had explained that the spring waters of Budapest were also pumped into the city zoo, and had been shown to increase the fertility rate of female hippopotamuses. I could not help but wonder whether the waters could have a similar effect on humans… although perhaps for slightly different reasons.

From the end of the Ottoman reign (1686) to the mid-19th century, the spa culture fell into relative decline. Then, in the latter half of the 19th century, when it became fashionable for the European elite to ‘take to the waters’ as a cure for anything from a broken heart to serious diseases, the city’s spas saw a revival which has survived to this day. Open air pools were built for the first time and extensions were added to the Ottoman baths.

Budapest had to wait until 1918, however, for its most luxurious spa of all: the Gellert.

Housed in a building at the foot of a hill overlooking the Danube river, the Gellert Spa is the epitome of art nouveau extravagance. After walking through a lobby with cathedral high ceilings and stained glass windows, visitors (or patients) enter a palatial domed pool area, flooded with natural light from a glass roof three storeys high, where swimmers can do their laps surrounded by sculpted marble columns.

The hot medicinal baths are in separate male and female sections, and the semi-circular pools are long enough to swim in, surrounded by frescoes (in the female section) or elaborately carved mosaics (in the male section)—open to families on Sundays.

If all this is not decadent enough, there is the VIP bath, available to those prepared to fork out 19,000 Hungarian forint (Rs 4,300) for a bit of privacy. Conceived for two people, this is a very large rectangular marble bath in a plush mirrored bathroom. It has a private sauna as well. The experience includes a surprisingly good bottle of Hungarian champagne and a fruit basket. For some reason, it is apparently rather popular with businessmen on grey winter afternoons.

Keen to cater to all tastes, the Gellert also has a large outdoor pool complex, complete with a wave machine in the summer, a favourite of teenagers and children, and a smaller warmer pool that goes into operation as soon as the outside temperature reaches 5 ºC.

There is an outside sauna hut as well, where a ‘sauna master’ conducts regular ‘aromatic sauna sessions’, which involve inhaling strawberry scented steam and smearing one’s body with honey. Once the honey has soaked in, one emerges sticky and sweaty into the cold air outside, and the brave douse themselves with freezing water. I tried it. My skin was soft as silk for days.

For those in search of more traditional pampering, the Gellert as well as most other spas in Budapest offer all sorts of therapeutic and relaxing massages, apart from various beauty treatments, pedicures and manicures.

A week was insufficient to visit all the spas and pools of Budapest, and I limited myself to the more historic baths. For those adventurous enough to go further afield, different types of spas dot the country’s landscape, from the Heviz thermal lake in Western Hungary, the second largest thermal lake in the world with a year-round temperature of 38.5 ºC, to the Miskolc caves in the North, where I swam in long labyrinths of warm water carved into rocks, with little caves leading off from side to side. One of the caves was pitch black, with phosphorescent stars and a moon painted on the walls. A young child was squealing with delight, as his mother threw him up and down in the darkness, and I accidentally bumped into a couple canoodling in a corner. I smiled inwardly and was reminded of Doctor Rak’s hippopotamuses.

If all this seems a little too strenuous, the best way to recuperate after a long hard afternoon in a spa is a visit to the Lukacs coffee house in central Budapest. It serves some of the best cream cakes I have ever tasted, fluffy and crisp and not too sweet—perfect if you want to convince yourself that you are not being too indulgent. The café is housed in a luxurious 19th century building, with golden mouldings on the ceilings, marble-top tables and crystal chandeliers. There, one can safely regain any excess fat that the hot springs may have melted away. A few doors down, you can visit the former headquarters of the communist era secret police. A sweet reminder that in Budapest, even outside the spas, history is never too far away.