This photographer started taking black-and-white portraits of commuters on local Mumbai trains 18 months ago. An exhibition and a book later, he still can’t stop 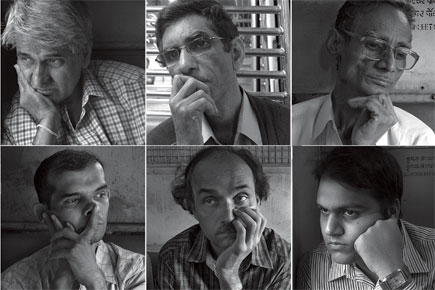 This photographer started taking black-and-white portraits of commuters on local Mumbai trains 18 months ago. An exhibition and a book later, he still can’t stop


It is 10 am and a typical Mumbai morning is underway. Large crowds have swelled on every platform of the city’s busy Thane station. But there are no trains. Neither is there any sign of one. The signboard indicators have long gone blank. Sensing the mood of disgruntlement, the public service announcement, instead of extolling the virtues of not spitting inside train compartments, apologises for the delays and requests calm.

Amid the crowd on platform No 3 is Chirodeep Chaudhuri, a large backpack across his shoulders, hoping to catch the 10.03 slow from Thane to Chhatrapati Shivaji Terminus (CST). When an empty train pulls unannounced onto platform No 4 instead, a scramble ensues. Elbows are thrust, shirt-tails pulled and rolled-up newspapers deployed to fight off competition for place inside. By the time the train pulls out, Chaudhuri finds himself inside and on a seat too.

And there is more luck to thank. An old gentleman in a well-tailored khaki safari suit has managed to occupy the seat opposite Chaudhuri’s. Wrinkled and cleanshaven, his grey hair combed backwards, and with a nose as creased as the newspaper he reads, this elderly man is a photographer’s delight. Chaudhuri dips a hand into his bag for his Canon G11, a small point-and-shoot camera, looks at the old man through the camera’s LCD screen, and takes a picture. Almost immediately, the old man looks up and glares. Chaudhuri holds his ground. The tension lasts a moment or so, before the bespectacled gentleman returns to his newspaper. For the next half hour, as the train trundles from station to station and individuals move to and fro, obstructing light and disturbing camera frames, Chaudhuri continues taking pictures of the commuter across his seat—until a middle-aged man muttering the usual “Adjust, adjust” eventually edges his way into the space between the camera wielder and his subject.

Chaudhuri is a well-known photographer in Mumbai who works as a magazine photo editor during the day. After office hours, he works on his own projects. Chaudhuri has been taking portraits of passengers on the seat opposite his for the last 18 months, mostly on the 10.03 am slow from Thane to CST, and some on his return home in the evening. So far, he has amassed about 800 photographs. Fifty of these were recently exhibited at the Chhatrapati Shivaji Maharaj Vastu Sangrahalaya (formerly known as Prince of Wales Museum). Ninety-eight are now available in a book called The Commuters, which was also the title of his exhibition.

The 38-year-old Thane resident says his photographs are about Mumbai’s working class. According to him, he had been working on an idea for a photo-project on this class of people for a couple of months before he realised that local trains offered the perfect setting. He, however, set himself a few rules. The pictures would be in black-and-white, because he felt colour would distract the narrative, and he would photograph only the individual seated right across, never consciously taking a seat in front of someone he’d like to capture.

“I wanted this project to be based completely on chance,” says Chaudhuri, “I couldn’t decide my commuter; chance would have to do it.” Most of his earlier projects have been about the city. These have included one on Mumbai’s clock buildings, and another about the ‘city’s enterprise’, for which he photographed a series of coin-operated public telephones. For The Commuters, he avoided taking pictures of anyone sleeping—unless the sight was truly compelling. And on the rare occasion that a woman sat in front of him, he refrained from shooting her, as such a picture would have been an oddity in the otherwise all-male collection, and also because the woman might have minded being shot.

What can be interesting about a black-and-white mugshot, and that too of an unknown individual who just happens to sit in front of you? As it turns out, it can be fascinating. Even within the limitations of a mugshot and rigid set of rules, rather varied pictures emerge, each portraying a personality whose story can only be a matter of guesswork. There is a photograph of a man in a half-sleeved sweater deep in thought, another of a man with wild tufts of hair coming out of his ears, with the wall behind him bearing the scribbled message ‘massage boy’. One young man wears his shirt buttoned up to his collar, while in another picture a wrinkled old neck emerges from a carelessly-buttoned shirt.

Many of the photographs have also been serialised. For instance, there is a series of photographs of men with phones. In one, a man holds two phones at a distance from himself, perhaps transferring data from one to the other. In another, a man with a number of rings peers into his phone, but over his glasses. There is also a series of photographs of a man with a moustache that covers his entire upper lip at various stages of dozing off. In one ironic photograph, a man gazing out with a faraway look wears a T-shirt that says, ‘I am part of the problem’.

Surprisingly, none of the commuters objected to Chaudhuri’s taking their photographs. While they were aware he was photographing them, he believes, they didn’t mind it because his manner did not seem threatening; it helped, of course, that he used a small camera.

Over the long course of the project, he became aware of the light available at different junctures of the hour-long Thane-to-CST route, the kind of train that was ideal for photographs, and even the importance of a compartment wall behind the commuter. “The wall is important,” Chaudhuri says, “Such a background is not a disturbance, and often there are dirty black patches on it because people with oily hair have rested their heads. This adds character to a picture. A new train is the best, because its green and white paint doesn’t absorb light the way an old train with dark brown paint does.” Mornings also proved to be the best time to take pictures. During evenings, the light would be low, and even that would be absorbed by bags on luggage racks.

A favourite photograph of Chaudhuri’s is that of a young man in a white T-shirt and dark jacket engrossed in a book. It’s a picture that could only have been taken by a photographer familiar with the journey. Here, in an otherwise dark setting, a sharp shaft of light bounces off the young man’s T-shirt and book to brighten his face. This picture, Chaudhuri says, was taken as the train pulled out of Sion station. “There is an overhead bridge at Sion station that blocks the sun completely on the 10.03 train to CST. Briefly, for those few seconds, it’s like travelling through a tunnel. And then suddenly a sharp light comes in. That’s when I took that picture,” he says.

Even though Chaudhuri’s book is ready for release and the exhibition almost over, he has not stopping taking portraits. “I assume I will stop someday,” he says, considering the prospect, “But I haven’t felt like stopping, so far.”

It has now been over two hours since Chaudhuri boarded the delayed train at Thane, and it has managed to cross only three stations. CST is still rather far away and everyone on board is growing restless. A commuter pipes up to tell fellow passengers that there has been a fire at Kurla station and that’s why most trains have been cancelled. One by one, people jump off onto the railway tracks and start walking away in search of alternate conveyance. The compartment empties out. Chaudhuri gets off too. Unlike others, however, he is only mildly upset. He has at least managed a portrait for his collection.