Ride into the Thai Sunset

Try Thailand if you love being on a bike. It is cheap too 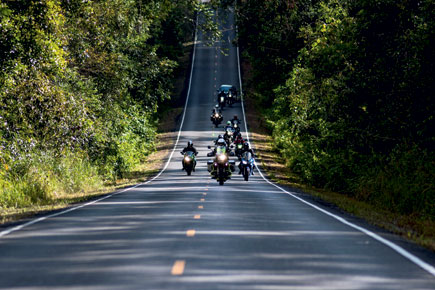 Try Thailand if you love being on a bike. It is cheap too


Recently, I found myself in Bangkok as part of a group of bikers about to embark on a thousand kilometre ride. I was nervous and picked the smallest bike I could see, the Kawasaki 650 EN. My feet could touch the ground and that was good enough for now. But there was a small problem. Everything on the bike was on the other side—the brakes were on the right and I needed my left foot to change gears. I ride an Enfield at home and my body is conditioned to do the exact opposite.

Bangkok traffic is nightmarish but still not as bad as Delhi traffic. I found that the cars and bigger vehicles stuck to their lanes while bikes weaved in and out. I worked to stay in the middle of our pack of bikers as much as possible. We were headed out of Bangkok to Khao Yai National Park, a gorgeous, lush forest. The first few days were spent largely on straight, fast-moving highways. We saw the rolling countryside hurry past in patches of bright green. As we left the highway to head into the national park, the road meandered, curving through the dense forest. Khao Yai covers over 2,000 sq km across four provinces—Nakhon Ratchasima, Nakhon Nayok, Saraburi and Prachin Buri. Its abundant wildlife includes endangered gibbons, leopards and tigers. Inevitably, we saw none of it, only monkeys hanging out.

The roads inside the park were just as smooth as the highways, though there is a strictly enforced speed limit here to protect wandering animals being run over. The Khao Yai valley is also wine country, home to Thailand’s biggest wineries. The curving roads challenged my skills. Throwing yourself into a curve at high speed is not something that comes naturally to me; the survival instinct rebels a little. It took me some time and sage advice from fellow riders during refuelling stops, before I began to trust the bike, to let the curves take me in as much as I went into them. The confidence that I would not overrun a stray dog or an idling autorickshaw helped and made it easier to relax into turns.

To anyone who loves riding bikes, I recommend a trip to Thailand. It is relatively cheap, the scenery is beautiful and the food is to die for. Eleven years ago, I used to have a friend’s Hero Honda CD100. That summer I went to Leh and rode my first Bullet. When I returned to Delhi and as soon as I had managed to squirrel away the cash, I bought myself an Enfield. The thing with riding for a few blissful days in Thailand is that I now feel the itch to get myself a new bike. As for the Enfield… I will keep that as well.