Playing for a Nobel Peace Prize

How seriously should we take people who design digital games? 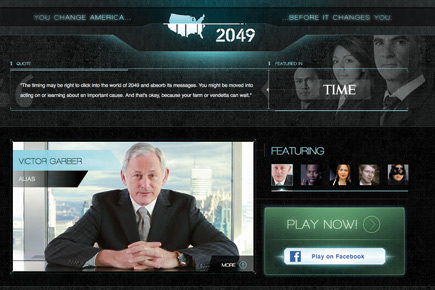 How seriously should we take people who design digital games? Very seriously


Jane McGonigal believes that someone from her field will win the Nobel Peace Prize one day. She even predicts that it will happen by the year 2023.

She is a game designer.

Digital gaming is no longer just about planting trees on imaginary farms or hurling around vindictive birds. Nor even about ancient empires and civilisations. Games are getting serious. Human rights, racial tensions, cruelty to animals, poverty and malnutrition, AIDS—these are some of the issues gamers are talking about.

And if you believe that diplomacy has always been about the games governments play, the US Department of State, Office of eDiplomacy, just confirmed it. In the last week of May, it hosted the Serious Games Conference in Washington DC, the latest of the ‘21st century statecraft initiatives’ announced by Secretary of State Hillary Clinton in 2008. Earlier projects covered how technology is being used and can be used in: disaster management (Haiti conference—May 2010), mobile banking (Mobile Money—August 2010), social development by non-commercial and non-governmental agencies (Civil Society 2.0—November 2010) and accessible and collaborative technology (Open source as software and culture—February 2011).

In keeping with the theme of useful technology and open access, notes from all these conferences (and unconferences—informal discussions with the agenda set by participants) have been made available freely on the internet—in the form of blogs, presentations and even a Tweetbook (a pdf document) of all the Twitter activity around the Serious Games Conference.

‘For an institution, such as the State Department, to be seen playing games might raise an eyebrow or two, but last week’s Tech@State: Serious Games Conference showed a crowd of nearly 200 that there’s real substance to play,’declares Paul A Swider, of the Office of e-Diplomacy, on the official blog.

The underlying idea is that the 21st century brings with it new challenges, which require contemporary solutions—using technologies and e-social networks. Talking about it, Clinton had said in October 2010, “We’re working to leverage the power and potential in what I call 21st century statecraft. Part of our approach is to embrace new tools, like using cell phones for mobile banking or to monitor elections. But we’re also reaching out to the people behind these tools, the innovators and entrepreneurs themselves.”

The term ‘serious games’ was coined in 2002, but all these years later, it is still difficult not to ask, how can games be serious? Anand Ramachandran, game designer and avid gamer from Bangalore, professes exasperation at the question. “The term ‘game’ itself is limiting. Look at it as a medium, as play, as learning through doing,” he says. Anand explains this further, “It is fun, enjoyable and you learn without being conscious of the fact, and therefore, it is internalised better.”

One of the presentations at the conference was on America 2049, a Facebook game developed with the help of Breakthrough, a human rights organisation based in India and the US. The game, to be played over 12 weeks, pits players not just against terrorist Ken Asaba, but also human rights problems such as social bigotry, sex trafficking, racial tensions and religious intolerance. According to Mallika Dutt, founder of Breakthrough, the game has over 20,000 players “who are highly engaged in tweeting, posting, and sharing information about the game on our social media platforms and internal discussion forums”.

And why Facebook? It is the perfect space to spark off an interest in such issues among young audiences, beyond the world’s dedicated gamers. “With more than half a billion users—over half the US population over 12 years old—Facebook is one of the most popular and accessible platforms for games and information-sharing,” says Dutt. Her faith in the power of social games is unassailable: “I truly believe that games offer a safe, virtual space for players to inhabit other identities and worldviews and work through complex social issues.” And this faith was rewarded when a young player—who had attended an offline event related to the game at the Birmingham Civil Rights Institute—described it as a “transformative experience that brought the civil rights movement alive for me in a new and vibrant way”.

Asi Burak, co-founder of Games for Change (an organisation whose name says it all), is passionate about the idea of using games to create a social impact. He believes that games have got bad press only recently, especially digital games, as they are seen as violent, frivolous and/or a waste of time. Burak says, “Games have been with us before the digital age and were always viewed as a positive activity, one that is related to learning among children. Moreover, games are about imbibing social and collaborative skills relevant to the 21st century.” Skills like creative thinking, problem solving, teamwork and entrepreneurship, which perhaps Secretary Clinton would approve of.

Burak is optimistic about the growth of this movement, given that “leading foundations (such as McArthur, Knight, Gates), government agencies around the world (USAid, Nasa, the White House) and NGOs (World Bank, UN) are all using this media now for this purpose”. His favourite gaming champion, however, is the 82-year-old Supreme Court Justice Sandra Day O’Connor. After her retirement, she chose digital media as a tool to engage young adults in civic education. From that thought came the very popular ICivics, where you can play president, understand the legislative process of the US Congress, or run a law firm that deals with basic human rights. Inspired by the success of ICivics in American schools, the ministry of justice in South Korea has decided to replicate the project and adapt it to the country’s own youth culture.

To see how these games actually work, I tried one of the more popular ones—Darfur Is Dying. The game, sponsored by mtvU and the Reebok Human Rights Foundation, was designed to create awareness of the plight of (2.5 million) refugees in war-stricken Sudan. For the first time, the Darfur crisis found a place in my mind—it is something I have been aware of in passing but never thought about seriously. I was asked to choose an avatar; I picked 12-year-old Abok, with her blue frock and wide eyes, and left camp to fetch water. It took less than a minute for me to fall. My heart lurched as I read the message: ‘You have been captured by the militia. Girls in Darfur face abuse, rape and kidnapping by the Janjaweed.’

In Darfur Is Dying, players assume the roles and responsibilities of an individual in the refugee community. For a short time, outsiders get a glimpse of the dangers the people of Darfur face every day in their struggle for basic needs like food, water, shelter and health. The games take players through various steps, each of them supplemented with information on that specific issue in Darfur and overall ways to help—from cash donations to emailing ideas to development agencies working in the area.

Soon after the Serious Games Conference, came the 8th Annual Games for Change Festival (20–22 June) with green activist Al Gore as keynote speaker. The conference included a public event in association with the City of New York (NYC), where Commons, a game that encourages citizen participation for civic development, was played in Lower Manhattan. In the game, open to the everyone, players were to ‘scour lower-Manhattan and compete to leave the best suggestions for city improvements, building up group consensus as they play’, as the website put it. The aim was to translate the learnings from games to real life situations, beginning with New York.

Mallika Dutt mentions that this leap from virtual to real life was part of the discussion at the Serious Games Conference. She says, “That was especially encouraging—to have a conversation about the power of games, but also what else we need to be doing as activists and innovators to get these ideas out of the virtual world and to really make changes on the ground.” Take that, you cynics.

And get ready to play.