One for the Monk

There is something about the ‘budha sadhu’ that defies classification—something pure and trustworthy about his no-nonsense spirit. 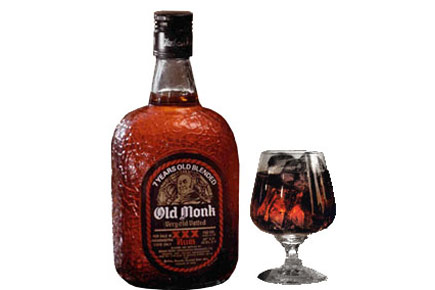 There is something about the ‘budha sadhu’, something pure and trustworthy about his no-nonsense spirit.


That squat dark oddly-shaped bottle. That funny fat bald old man in a robe beaming at you. What is the magic of Old Monk that never dies? What is the basis of the unquestioning faith that the Old Monk drinker reposes in the brand? What is the source of the extreme brand loyalty it generates? After all, there are millions of men who start their hard liquor life with Old Monk and never drink anything else till the day they die.

The facts, for the record. Old Monk is a dark rum blended and aged for seven years (though there is also a more expensive 12-year-old version, the Old Monk Gold Reserve). It has an alcohol content of 42.8 per cent and is produced by Mohan Meakin, based in Mohan Nagar, Ghaziabad, Uttar Pradesh. It is the third largest-selling rum in the world, and has been the biggest Indian made foreign liquor (IMFL) brand for decades. Old Monk is the only spirits brand to figure in advertising guru Ian Batley’s list of potential Great Indian Brands, which could tap the world market. Suzuki Motor Corporation Chairman Osamu Suzuki is a connoisseur of wines. In his personal dining room and bar where he entertains his guests, there is a bottle of what he believes is the best liquor brand from each of the 192 countries the company operates in. India is represented by Old Monk.

But Old Monk enthusiasts couldn’t be less bothered with the numbers. For them this rum is more than just a drink. It is a close friend, a confidant, a keeper of memories. With every sip that you take, incidents come flooding back. The first time one got sloshed and got caught by the hostel warden. The first time one confessed one’s love but to the wrong girl in a moment of drunken recklessness. And finally the heartbreak when nothing but Old Monk could soothe the pain. Nostalgia is definitely something that Old Monk brings. Even if you are rich now, and only drink Scotch or wine, you retain a special affection for the brand.

The sense of kinship that comes with being an Old Monk drinker is legendary. There are tales galore about how strangers became fast friends over a glass of Old Monk. Mention Old Monk or “budha sadhu” (as he lovingly calls it), and Aditya Dhar, manager-training with American Express, and memories of the good times he spent with his friends crowd his head. “I can never forget this one cold January evening that we spent at a friend Neil’s place. We kept on drinking and Neil continued to strum the guitar till his fingers bled. But did he stop? No, not at all. Old Monk was the only remedy required and he played every single song in the book,” reminisces Aditya.

Glenn Satur, one of Internet’s unknown poets, puts it thus: “You’ve brought feeling to our lives, at moments of desperation. For most of us, you have been our mentor and our inspiration. We don’t give up on things, even if we think our lives have sunk. There’s always a solution to a problem when we have you dear Old Monk Rum!”

Arijit Ganguly, team leader with Royal Bank of Scotland, shares his story about a friend who just couldn’t take the freezing cold of Himachal Pradesh. “We were in Chail and we had to change buses. It was freaking cold and we found to our consternation that the bus would arrive only after an hour,” he recalls. One of his friends was so cold that even three trousers and countless number of sweaters couldn’t keep him warm. “Suddenly he took out a bottle of Old Monk and gulped down 100 ml of it in one shot. Within 15 minutes, his eyes and ears had turned red and soon he was found singing ‘My balls are on fire’ in a mere sweatshirt and jeans.”

Perhaps another thing that works for the Monk is also the sense of reassurance that one gets on seeing the signature design that hasn’t changed a bit in years. It is a soothing thought that in this ever changing world, one has something constant to hold on to. Of course, the fact that quality has never faltered helps. Then there’s the distinctive taste, different from every other rum in the world. Anyone who has ever had Old Monk will recognise the taste in any blind test.

When drinking with Old Monk enthusiasts, one has to adhere to the proper etiquette. One cannot say, “I am having a glass of rum,” when you are having Old Monk. Old Monk is not a rum. Old Monk is Old Monk. It is utter sacrilege to drag this priceless drink into the category of regular unexciting rums. You need to feel the pride, the proper respect, the honour when you hold a glass of Old Monk.

There is something about Old Monk that makes you feel all-powerful, that you have the strength to take on the whole world. A friend, Arindita Gogoi, could muster up the guts to tell her mother that she drinks only after she had had a few sips of Old Monk: “I was in Delhi, having Old Monk with a friend on a chilly December evening when my mom called from Assam. When she asked me what I was doing I told her very emotionally that, ‘Maa, it is very chilly here and nothing but a dark rum could save us.’” Her mother hung up. But to this day, Arindita continues with her unfettered fealty to this amazing drink, in spite of her mother’s displeasure. “You don’t feel stylish with Old Monk. It just makes you feel more rustic and grounded,” says Arindita.

However, Old Monk hasn’t been without its own share of heated debates. The one that has been plaguing its fans since eternity, or well since cola companies took over the world, is what is the best way to have this drink. With cola or hot water? On the Old Monk Appreciation Society page on Facebook, enthusiasts discuss such topics with a vengeance.

While some suggest having it with three-fourths Coke, topping it off with two cubes of ice, others consider the use of cola sheer blasphemy. It’s hot water or nothing at all.

While legions of fans argue on Facebook, Vikram Gour and Chaitanya Chadha sit back and watch as their creation achieve all that they had envisaged for it. When they created this society on Facebook, they wanted to find like-minded people who shared their love. And they weren’t disappointed. People from all across the world answered their call. Today, the society boasts of 1,100 members.

Some of the overseas fans have even been able to sniff out Old Monk vendors in the backlanes of their cities. “A fellow group member, Jeet Singh, based in New York, joined this group because he had had Old Monk many years ago. The thought of enjoying this drink again led him on a hunt through New York where he actually managed to find a bottle! Imagine that!” says Vikram.

If you go looking, you will be able to unearth countless anecdotes related to the Monk, most of them bordering on the insane and bizarre. Our favourite is the one about the drunken cockroach posted by director Shekhar Kapur on his blog. Remember the scene from Mr India in which Sridevi jumps on to the bed in alarm when she spies a cockroach? Did anyone notice how the cockroach was so well behaved throughout the scene? ‘Well, I needed the cockroach to be very still for the camera as he/she eyed Sridevi threateningly. Focusing takes a long time and the cockroach needed to be patient. So we got the cockroach drunk!! No kidding, we surrounded the cockroach in a pool of my favourite Old Monk Rum and it was soon lolling around like a drunken sailor, giving in to director of photography Baba Azmi’s every demand. Unbelievable, but hey, talk to anyone on the sets. It was true!’ We believe you, Shekhar.

So what is it about the budha sadhu? We believe that the subconscious reason for the way the fan thinks of the brand is that Old Monk never tries. It is a rum with no frills, no add-ons, no come-hither branding and advertising. It’s just a damn good rum and it wants to be treated with the respect that a good friend deserves. That is its only demand from you. It is totally no-nonsense. Thus, there is something pure and trustworthy about it. It has always wanted to be just a tasty rum, and by focusing on that, has transcended liquor and become something else. Completely.