On Which the Sun Won’t Set

Calcutta Clubs are quite simply in a class of their own. There’s a good reason for that. And also for why their charmed existence is destined to last forever 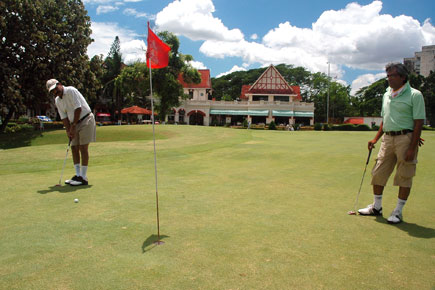 Calcutta Clubs are simply classy. Here’s a good reason why their charmed existence is destined to last forever


The city’s spanking new software park may have to wait, but its social life has been binary for a long time. There are those who belong. And those who don’t. To Clubs, that is. And by Clubs, one means only the league of prominent ones—Calcutta, Bengal, Tolly, Saturday and Royal, nothing less. Flourishing remnants of the Raj, Calcutta’s Clubs are more than mere clubs, in a sense. They’re where the swish set socialise, dine, entertain, play, unwind and even stay over on weekends, making them nothing less than a second home to their members. They’re also vastly different from their counterparts in other metros. Calcutta’s Clubs are elegant, intimate, genteel, and have an old-world charm to go with an intellectual ambience, unlike the marble-and-glass glitzy, impersonal, aseptic and show-offish clubs in many other cities.

The big five, all boasting of rich heritage and steeped in time-honoured traditions that members religiously adhere to, serve a wide variety of needs and whims of their members. “The club is where I play, meet friends whom I’ve known for decades, chat, relax, eat, drink, bring people over to, party and use to hold family events like birthdays and marriages. It’s truly a multipurpose venue,” says Tollygunge Club (the ‘Tolly’) President Saibal Sen. Sitting at the red-tiled Shamiana, one of its five restaurants, at the edge of the expansive greens after a round of golf one recent morning, the amiable Sen says the Club has become an inextricable part of his daily life. “My whole day is wasted if I don’t start it off with a round of golf and an invigorating ‘adda’ with my friends here,” he says. ‘Friends’ here mean other members of the club and their families as well. While the 18-hole golf course set over a 100 acres is what draws Sen and his ilk to this 114-year-old club, its equestrian facilities are why others like Arun Nevatia joined the club nearly four decades ago. And with six tennis courts, four squash courts, two swimming pools, health club, salon and ayurvedic spa, Tolly offers wholesome fare to all. Not to forget its five plush bars. Thus naturally, Nevatia says he can’t imagine life in Calcutta without Tolly.

Unlike most of their counterparts in the rest of the country, members of Calcutta’s Clubs make extensive use of their sports facilities. “Most clubs in other cities stir to life only in the evenings when members flock in to eat and drink. In Calcutta, going to the club means playing some game or the other, chatting with other members and their families and relaxing. A drink or two and eating is part of the clubbing routine, but not the sole or major part of it,” Tolly Chief Executive Anil Mukerji tells Open. “Many people spend a major part of their weekends here since there are so many things to do,” adds Sen, a prominent surgeon.

The reason the British elite established these clubs was to provide exclusive venues for their ilk to play games and socialise. This tradition endures, with regular sports meets and tournaments being an integral part of the Clubs’ calendars. “I go to the clubs to play squash, golf and swim. Of course, I also socialise and entertain at the clubs, but that’s not the major or only reasons I go to the clubs,” says Abhishek Kejriwal, owner of a leading computer hardware store in the city. For instance, the Royal (the Royal Calcutta Golf Club, for those who don’t ‘belong’) focuses exclusively on golf and all its members are avid golfers. “We don’t have any members who don’t use one sports facility or the other. No member comes here only to eat and drink,” says veteran Calcutta Club member Ronen Sengupta.

Andrew Yule’s Chief Kallol Dutta feels the sporting tradition of Calcutta Clubs is what sets them apart. As is the case with all members of these clubs, Dutta says his family (wife and kids) frequents the Clubs more than he does. “I don’t have much time nowadays to go to the clubs. But my family more than makes up for it,” he says. “My wife and kids have their own social circles in the club and go there nearly every day, while I can make it only a couple of days a week at the most. It’s very good that my kids play, unwind and hang around at the club with kids of other members who I know. So I know I don’t have anything to worry about,” says Arun Jain, scion of one of the city’s leading business families and a second-generation member of the 134-year-old Saturday Club.

Many hold multiple memberships. Thus, while Kejriwal is a member of Tolly, Bengal, Royal and Calcutta, Dutta is a member of all five and two less prominent clubs of the city as well. Sengupta also holds membership of three clubs. And they put their multiple memberships to good use. The practice among this super-elite of club goers in Calcutta is to unwind and play at Tolly, entertain business associates at Bengal Club, socialise at Calcutta Club and Tolly, tee off at Royal, and drop in for a quick snack and peg at Saturday. That’s because of the unique advantages of each club: Bengal Club on Russell Street is in the city’s business hub and thus ideal for taking business associates to lunch or cocktails and dinner; Calcutta Club with its large lobbies and Raj-era get-up offers a laid-back ambience suited to unwinding and relaxing while meeting old friends; Tolly is the typical country club that has a range of activities and cuisine to offer and is the right place for taking family and friends to in the evenings or weekends, while the Saturday Club, also centrally-located, is just the right place for a stopover to unwind after work.

Let’s not forget for a moment that all these are really exclusive spaces. Getting membership is extremely difficult. Tolly, for instance, has a ten-year waiting list, while Calcutta and Bengal Clubs have 12-15 year queues. The Royal stopped taking new members a few years ago, while getting into Saturday Club would involve an eight-year wait. But a long wait doesn’t mean anyone can get in. The screening of applications is long and exhaustive, covering the applicant’s character, social standing, background and more. Mere professional or business success is no guarantee of acceptance. You have to be a well-rounded personality with interest in sports, excellent social skills and, of course, success in your field of work, says Tolly’s Sen.

All that aside, Kolkata’s big five boast of an unmatchable ambience. Stepping into the 102-year-old Calcutta Club is like going back in time to the elegance of the Raj era. The liveried waiters, polished brass and teak, the shining wooden floors, the soft hum of genteel conversation and the serenity would have you think time has stood still here. Or the Bengal Club, whose stately splendour, in the Club’s own description, ‘compels one to fall in with its adagio pace… a Club where the flavours of fine life are to be savoured as in a brandy sniffer’. A first-time visitor to Saturday’s Light Horse Bar can be forgiven for mistaking it for an officers’ club in a British regiment—Victoria Crosses and other medals from the two World Wars, as well as other military memorabilia, are proudly displayed in the gleaming bar; the Club was founded in 1875 by officers of the Calcutta Light Horse Regiment, which was disbanded after 1947 and whose trophies and suchlike were then transferred to the bar. The 180-year-old Royal, which was conferred the honorific adjective by King George V to commemorate his visit to Calcutta in 1911, takes its regal status seriously; not only are its fairways rated as among the world’s best, the sprawling Club house, with its understated elegance and plush interiors, are a throwback to the days when men were rated by their style and sophistication. Good ol’ Tolly, of course, has no rival. Rated by the BBC as one of the world’s top 20 clubs, this country club founded by a Scottish banker in 1895 is a veritable oasis inside an otherwise chaotic city—its relaxed, serene and lush environs make it the envy of all others. Walk into Tolly’s clubhouse, the Palladian Garden House (it’s over 225 years old), and you are overwhelmed by a sense of heritage. Other structures are no less magnificent.

While the big five are exclusive, they’re not expensive. The food, liquor and other services are priced much below typical market rates, and this adds to the allure. “The price of a peg at any of the clubs is just half that of an average bar; the same goes for food. Also, the ambience at the clubs is much better than even the restaurants at five star hotels where many customers are loud and gross, unlike clubs’ members who know how to conduct themselves,” says Kejriwal. All of it at high quality. “Food at the Clubs is truly an epicurean’s delight,” says Dutta. Bengal Club’s honey glazed ham or lobster thermidor is a delight and the reputation of its Christmas turkey with cranberry sauce has spread to far corners of the globe. The Chinese fare at Saturday’s Dim-Sum Chinese Room, or the desserts and cakes from Calcutta Club’s patisserie and the Mughlai dishes at Tolly are a must for gourmets. And there is the strong sense of belonging. “I feel completely at home in the club (Tolly). The waiters and staff there have known me since childhood and many of them still call me ‘baby’,” says Somini Sen Dua, who runs a PR agency. Clubs are also the place where children of members are groomed in social skills. “My children, nephews and nieces have learnt many things like interpersonal skills, grace, style, conversation techniques and a lot more here, thanks to the ambience and culture,” says Nevatia.

But then, all that still doesn’t quite explain why Calcutta Clubs, essentially British institutions, are flourishing when other Raj relics have fallen by the wayside. That’s because, says Tolly’s Sen, clubs go well with the Bengali temperament. “Bengalis love addas, and there’s no better place for it than the club,” he says. Kallol Dutta agrees: “The adda culture has permeated through Calcutta’s citizenry, across all sections and communities. And clubs, with their sports facilities—Calcuttans are sports lovers too–are the best facilitators of a good adda.” Best done with sundowners and succulent kebabs. Cheers to clubbing!