On A Meow Meow High in Mumbai

A new addiction is gripping the city 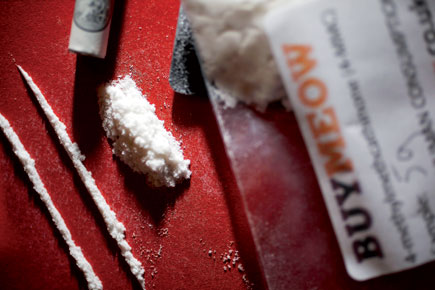 The story of this 14-year- old seems in keeping with what the drug does. Her working parents had entrusted her to the care of the joint family— seven adults and three children—they lived in. One day, when her mother, an executive with a realty firm, returned from work, she saw her daughter fast asleep. What was odd, though, was her behaviour after she awoke: she was angry and fatigued. When the pattern repeated itself three days in a row, the mother consulted their family doctor. He suspected drug abuse, but the daughter denied the intake of any narcotic. Finally, the parents found that she had been drinking a bottle of juice that her best friend brought daily, a drink they later discovered was spiked with mephedrone, a new synthetic drug. Questioning revealed that the friend had been introduced to a white tablet at her dance class and she had been taking it with her juice as a mood uplifter. It made her happy, she said. And it only cost Rs 50 for two pills.

The girl is currently in a de-addiction centre in Mumbai, getting weaned off the drug. “I would listen to FM radio all the time. The way the RJs spoke of ‘meow meow’ (the popular name for mephedrone) and its effects made me keen to try it,” she says.

Mephedrone is easy to buy. Available online, it is delivered home, bypassing peddlers. Websites sell it under such names as Drone, Bubble, Meow Meow, Mieow, Meph and M-Cat. The feline touch is explained by its similarity to the African herb khat, pronounced ‘cat’. Unlike banned drugs such as cocaine, ecstasy or LSD, mephedrone is not covered by the India’s Narcotic Drugs and Psychotropic Substances Act (NDPS). The drug is used for plant feeders, bath salts and chemical research, and so it escaped a ban despite being addictive. Cheap to synthesise—it can be produced in a pressure cooker— mephedrone can be drunk dissolved in a fluid, swallowed as a tablet, snorted up a nostril or even injected. Teenagers seem to be particularly vulnerable to its charms, according to the Mumbai Police.

Dr Yusuf Merchant, founder director of the NGO Drug Abuse Information Rehabilitation & Research Centre, fears that Meow addiction is spiralling out of control. The police estimate of 100,000 addicts in the city, he says, under represents the true scale of the menace. He has written to the Prime Minister and the Chief Justice of the Bombay High Court asking for a complete ban on the sale and consumption of mephedrone.

“This is the worst drug I have seen in the 33 years of my medical and drug rehabilitation practice. The addiction has reached epidemic proportions and a huge disaster stares us in the face,” said Merchant at a press interaction. Mephedrone needs to be classified under the NDPS Act as an illegal substance, he believes. Maharashtra Chief Minister Devendra Fadanvis has also asked the Centre to consider such a ban. As of now, the Mumbai Police have to book those found with the drug under Section 328 of the IPC, which forbids the consumption, possession and transportation of a poisonous substance.

Unlike cocaine, LSD or ecstasy, which display predominantly male consumption patterns, this drug has vast numbers of female users. “Teenage girls are getting more addicted to Meow and their numbers are high. It is a very alarming trend,” says Dr Sadiq Patel, professor and head of the department of Pharmacology, Sir JJ Group of Hospitals & Grant Medical College. “There is a lot of weight loss when this drug is taken,” he adds, “Probably that is the reason why it is so popular with young girls.”

Ever since Meow began sneaking its way around Mumbai, with the first few cases reported in late 2013, it has emerged as a middle-class alternative to cocaine. It works by releasing high levels of dopamine, a neurotransmitter that offers a sense of euphoria and plays a role in sexual arousal. According to users, if the drug is taken orally, its effect can be felt within 15 to 45 minutes. Snorting it assures a faster high that usually peaks within half an hour. The high lasts for up to three hours when taken orally or snorted, but only half an hour if taken intravenously. About 80 per cent of the addicts admitted to the state government- run GT Hospital and Masina Hospital in Byculla are Meow addicts. Both direct intervention and sustained psychiatric counselling are needed to get them off the drug, say de-addiction experts.

A doctor at Masina Hospital who is treating several cases of mephedrone addiction says that the drug’s side effects are severe and become apparent soon after one turns into a regular user. These include “dilated pupils, poor concentration, teeth grinding, poor visual focus and short-term memory, hallucinations, delusions and erratic behaviour” in the doctor’s words. Snorted, it can cause severe nose bleeds and tooth-and-gum decay, apart from skin lesions. “The side effects appear to be like Krokodil [available abroad], which when injected starts eating the user’s body from inside, bursts blood vessels and kills the surrounding tissues,” he adds. Since the drug is so new, little is known of its longer term effects.

The police think the decreasing purity of the cocaine and ecstasy available in Mumbai may explain the success of mephedrone. Some trace it to Goa; after the Goa Police began cracking down on the drug mafia in that state, mephedrone, sold as a plant fertiliser there, swept in to fill the vacuum. From Goa’s party circuit to Mumbai’s would have been a quick hop. Wide awareness, the police believe, could reverse the city’s demand for the drug. This would be a key battle won while measures to curtail its supply are worked out. Some years ago, it was the drug Ya Ba—which could keep users awake for days—that threatened to take over Mumbai’s streets, but the government cracked down on it and supplies from Thailand petered out.

Mumbai Police Commissioner Rakesh Maria has issued an advisory to the city’s police stations to start a campus campaign highlighting the menace of mephedrone. For this exercise, the Anti- Narcotics Cell of the Mumbai Police has adopted 100 schools and 26 colleges. These institutions are expected to be on high alert as well. According to Dr Anjum Ara Ahmed, vice-principal of Rizvi College, Bandra, which is among those covered by the campaign: “Our college does not have any incidents of drug addiction within the premises. The college has a very strict Discipline Committee and an active NSS who maintain a vigil around the college to ensure that there are no suspicious hangers-on.” Social awareness drives have begun too. Congress municipal corporator Fayaz Ahmed Khan, who is spreading the word among young Muslims in the city, says that maulvis have started issuing warnings at prayer time.

Mephedrone was first synthesised by chemists in 1929 and forgotten until it surfaced for sale on the internet in 2007. Though it entered the market legally in the US, it was declared a Schedule I drug in November 2011, with the US authorities launching a massive crackdown on its sales on the internet and elsewhere. Israel had banned it back in 2008, as did most European countries two years later.

Last year, celebrity British TV and radio announcer Paul Ross confessed to being a mephedrone addict. The drug had destroyed him, he said. His cautionary words, however, do not seem to have reached far and wide enough. Or are simply going unheeded. “Over 1,000 kg is sold on a single day across Mumbai, Thane and Navi Mumbai,” says a source in the Anti-Narcotics Cell.

While the Centre mulls a ban on mephedrone, the police are finding it difficult to choke off its supply because the drug’s sellers cannot be charged with an NDPS offence. “It is the toughest challenge ahead,” says Maria.