Now Will You Marry Me?

For those who cannot come up with a clever way to pop the big question, there are proposal planners at hand. 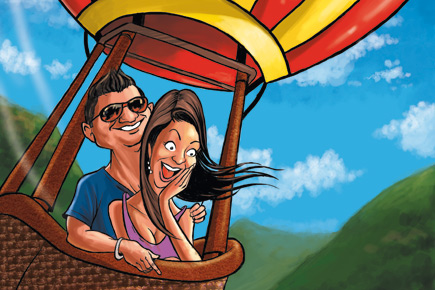 For those who cannot come up with a clever way to pop the big question, there are proposal planners at hand.


On 1 January, Arijit Ghosh* intends to hire a limousine and take Ritu, his girlfriend of the past four years, to her favourite restaurant. The next weekend, he is going to surprise her again with a hot air balloon ride in Ranthambore. And, once they descend to earth, a heart shaped arrangement of 700 roses will be waiting for her along with a dainty engagement ring. Ritu will hopefully be impressed, if not swoon. She is an adventure sports enthusiast and has wanted to go on a balloon ride for ages. In fact, she told Arijit about this when they first met at a college fest. What she will not know when he offers the
engagement ring is that none of these ideas came from his brain. Nor did he have to worry about the logistics of getting it organised.

“I am in a creative field and should have been able to think of an ingenious idea on my own. But I racked my brains for weeks and couldn’t come up with anything inspiring,” says the 29-year-old senior copy supervisor with an advertising agency in Delhi. He did what every desperate man does nowadays—a Google search. It took him to excitinglives.com, an ‘experience gifting company’ that he has since signed on to take care of every little aspect of his wedding proposal. It will set him back by around Rs 50,000. But if and when Ritu agrees to marry him, it will sure be worth it.

Arijit is one of the many in the market for the wildest, craziest, most creative idea ever to pop the bended-knee question. And where there is demand, comes supply: a battery of trained professionals has emerged to arrange it for them. From none at all in 2008, there are now at least four proposal management companies in Mumbai and Delhi. Most proposal managers are wedding planners who thought of giving this little bit of ‘backward integration’ a try.

Take 28-year-old Bhavesh Mehta. As a fresh MBA graduate, he saw potential in the field and set up his company myGenie.co.in this Valentine’s Day after a year or so of research. “I had done something like this for a friend a few years back, and he loved it,” he says, “Proposing is essentially a western trend that has caught people’s fancy in India. But most people don’t know how to implement these ideas.” The best part is, the youth nowadays—especially amorous youth—have big money to pay for such a service. The estimated annual outlay on weddings in India is a staggering Rs 150,000 crore, expanding at 25 per cent, according to Tarun Sarda, CEO of Vintage and organiser of wedding exhibitions like Vivaha. “Also, one can see a competitive streak in people,” Bhavesh adds, “Each one wants his or her proposal to outdo others’.”

People, especially in India, have always been culturally programmed to think of marriage as the most significant milestone in their lives. It’s just that the premium on memorability has skyrocketed. “At myGenie, our focus is on turning special occasions into a memory for the recipient,” says Bhavesh.

“Movies like Dilwale Dulhania Le Jaayenge and Hum Aapke Hain Kaun sparked off dreams of picture perfect love stories,” observes Meher Sarid, another popular wedding planner, “Newer roles are emerging within the wedding industry, be it proposal manager or anniversary planner.” Short of planting a mustard field to run into each other’s arms through, they can whip up just about anything money can buy.

Professionally aided proposals are not entirely new, of course. They have been around in the US for some years now—with ideas that range from unconventional to downright bizarre. An article in The New York Times of 2 February 2008 mentions a proposal that took place during a magic show. A girl was called on stage to kiss a frog. Unknown to her, the boyfriend was smuggled backstage and made to change into a frog suit. When she kissed him, he took off the costume and presented her with a ring, much to the delight of the audience.

In addition to proposal planners, the West is even witnessing the emergence of proposal photographers. The blog of Casey Fatchett, an active member of the Wedding Photojournalists Association, is peppered with captured evidence of such proposal moments. ‘More and more men are hiring photographers to
snap candid photos of this event,’ writes Casey, whose photographs have appeared in publications like The New York Times, Professional Photographers of America and MacLeans.

India is catching up fast with the West. Bhavesh gets nearly three enquiries a week for managing proposals, mostly from people in the 26-29 age group.
This is how a proposal planner typically works. Once he gets an enquiry from a client, he sends out a questionnaire to gain information on the recipient, tentative budget and theme preferences. Based on these, he comes up with at least five different ideas, of which the client usually shortlists one or two. Around 20 to 30 vendors for things like light, food and legal permissions are included in the process once the idea begins to take shape. The client is then presented with the final idea, and its implementation begins only after a firm go-ahead. As with pregnancy, there is no scope for half-truths here.

“Today, weddings are being planned one-and-a-half to two years in advance. So you can imagine how seriously people are taking this process. And since it all starts with a proposal, how can that be taken lightly?” says Candice Pereira, creative head of Marry Me: The Wedding Planners. She recently organised a romantic proposal for a couple on a yacht in Mumbai. They arranged for champagne and a trio of violinists. “I was told that the girl likes Japanese food, so we got a sushi chef to cook for her,” she says. The lucky girl had no clue what was going on. All she knew was that this was an outing with friends. When she reached the yacht, there was no one there. And then the lights came on, there was music in the air, and her man got down on one knee and proposed. “The team had to ensure that there were no loose ends,” says Candice, “The timing for everything had to be precise. The firecrackers had to go off at the right time, the music had to start at that exact moment.”

A treasure hunt is yet another innovative proposal technique that Candice and her team uses. The girl is taken through 12-13 of her favourite stores in search of the treasure and finally ends up at a high-end jewellery store. “We have been consulted by seven to eight people so far,” she says, “Each of them wants to have an elaborate proposal.” Right now, her team is in discussion about an airborne proposal. “Taj charges Rs 320,000 for an hour on their aircraft. They serve fine food and beverages too. A client wants us to arrange this as part of his proposal package. Someone who doesn’t want to spend this much can hire a smaller aircraft from another company that costs between Rs 80,000 and a lakh for an hour,” she adds.

Lavish proposal ideas like these can cost anything between Rs 10,000 to a couple of lakh. This includes guidance on choosing the diamond and flowers as well. The fee of the proposal manager depends on the scale of the occasion. Note that proposals are no longer just single-day events, they can even stretch over two or three days.

It is also not just the men who are using these services. One of Bhavesh’s clients was a girl deeply in love with a car enthusiast. “We got together all of his favourite high end luxury cars and took them to his vacation home, which was a few kilometres away from Mumbai,” recounts Bhavesh, “The girl asked him to step out, and on cue all the cars started playing his favourite song. As the melody continued to play, the girl went down on her knee with a ring in her hand.” He will never forget the experience.

(*Name has been changed. How could we spoil the surprise for the couple?)